Facebook launches election tracker for Indonesia
With over 69 million Facebook monthly active users, the social network launched an election tracker called Facebook Suara Indonesia. The election tracker monitors the most popular presidential candidate based on the number of mentions posted on Facebook. Results can be checked based on geographical data and time. That said, it can’t differentiate the sentiments - whether it’s positive or negative - when people mention the candidates. The tracker is developed together with the digital agency Bubu, which believes that around 70% of conversations about the Indonesia general election is on Facebook. It will be interesting to see the outcome of this as the election happens next week.

Myanmar’s new mobile internet users pick Viber over Facebook
With 49% web users accessing web on their phones, Myanmar is skipping the era of PCs entirely. Not only that, a survey from On Device Research, found that Viber has scored an early win in Myanmar in the heated messaging app battle. 79% of users pick Viber versus 27% on Facebook. People are clearly using multiple messaging apps but it is surprising that WhatsApp has just 5% usage among the respondents and behind WeChat and Line. With only 10% of population in Myanmar having mobile phone right now, it's a good opportunity and market to keep your eyes on. 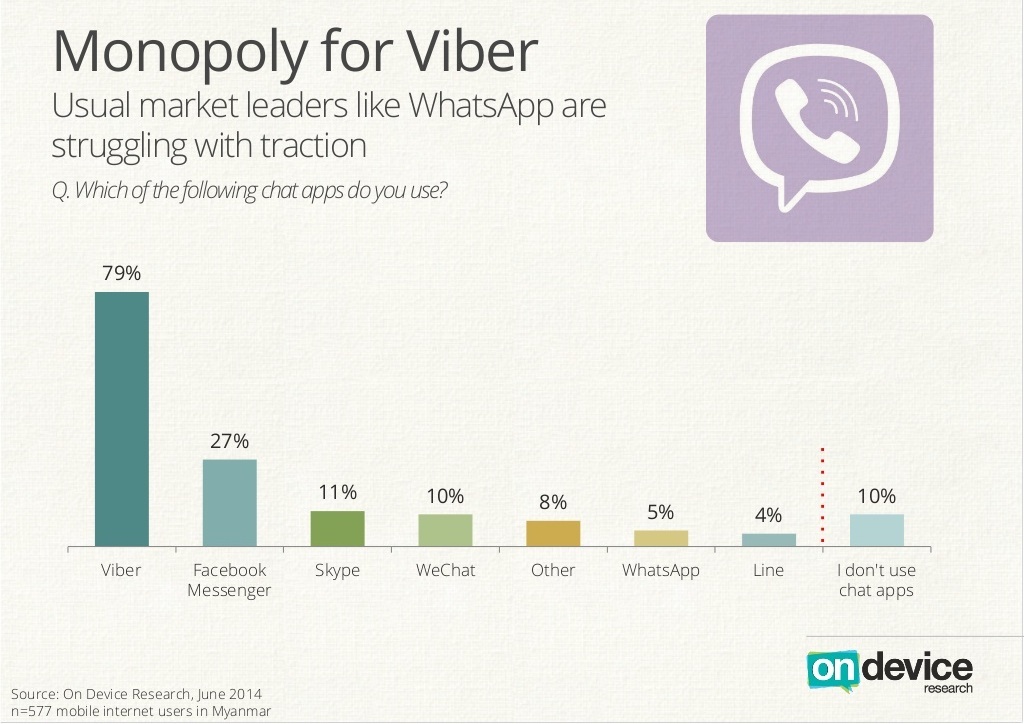 ‘Buy Now’ button is seen on Twitter
The “Buy Now” button appeared on multiple tweets on Monday according to Mashable. All of them included products that link back to a shopping site called Fancy that was first discovered by tech-news site Recode. Though the button appears in Timeline and expanded-tweet view, nothing happens when the button is clicked. It only appears on mobile and not on Twitter’s web version, which may be a possible experiment since Twitter is known to experiment often or an accidental release. No matter what, it only implies that enhancing the shopping experience may be on the way for Twitter. 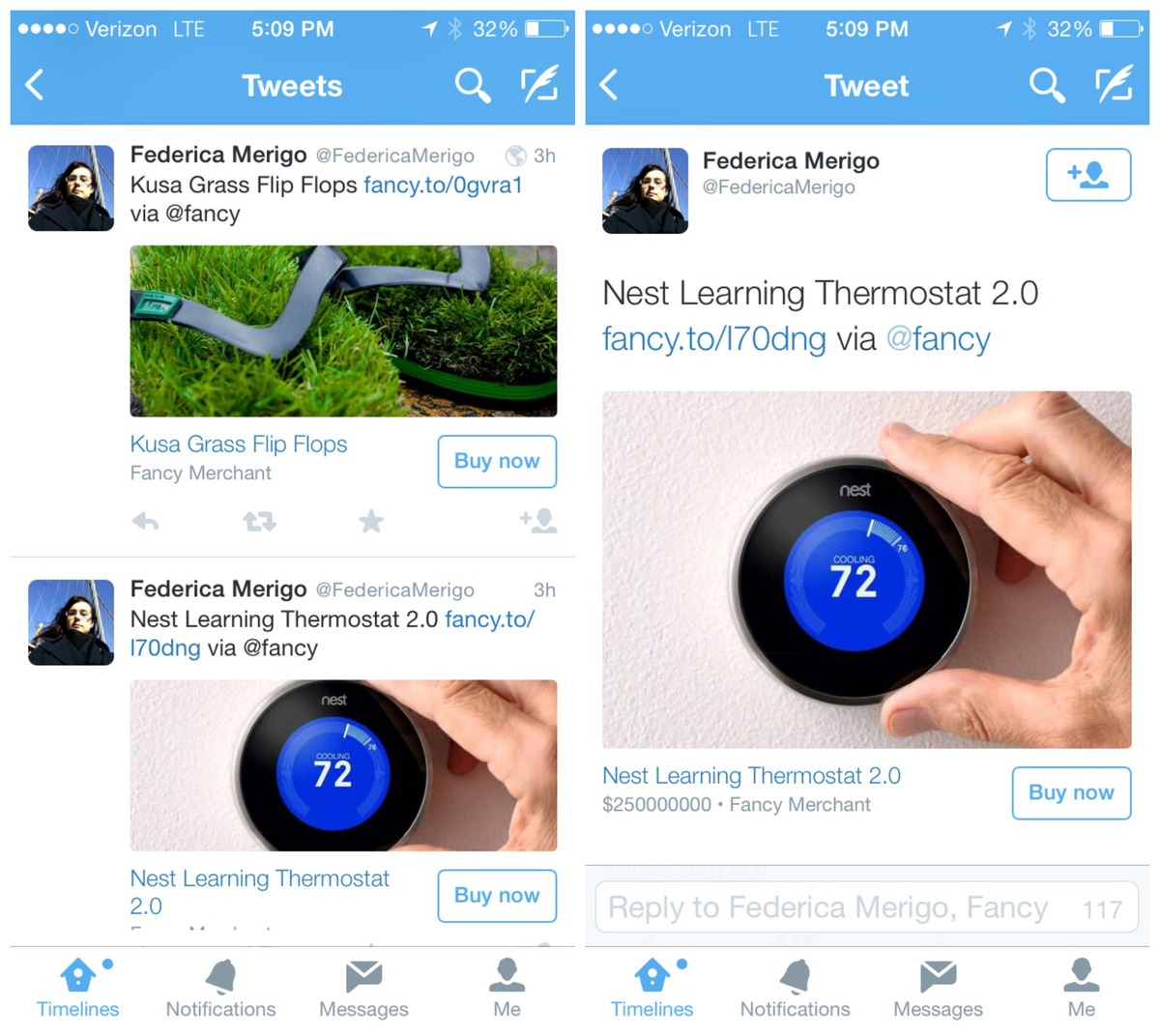 CCOs have social on their radars

A survey of 203 chief communications officers worldwide has found that social media is expected to be the biggest factor affecting them. Of those asked, 91% answered that they predicted social media to have the single biggest impact on their job in the coming years. In response, 73% were hiring more social media experts.

Facebook is still important to teens
A couple of recent surveys have produced evidence countering the general belief that teens don’t use Facebook. Forrester asked 4,517 US 12-17 year olds about their social habits, finding that over 75% use Facebook (only YouTube saw a higher figure) and 28% use the platform ‘all the time’, more than on any other network.

Similarly, research into 2014 US high school graduates concluded that 47% use Facebook a few times a day and another 14% once a day. These figures, too, are higher than for any other social networks.

Business Insider Intelligence produces Snapchat report
Business Insider Intelligence has produced a report about Snapchat, with some pretty impressive figures. The app has 82 million monthly active users globally, as of May 2014, of whom the majority are female. 70% are aged between 13 and 25, and two-fifths of 18-year-olds claim to use Snapchat ‘multiple times daily’.

Facebook interactions are up, but not necessarily for brands
Facebook reach has indeed been dropping, but it seems that interactions are on the up. According to analysis of the 3m largest Facebook pages, total interactions have increased by 30% since January 2014. However, the figure mentioned is ‘total’, meaning it may be influenced by a rise in post frequency. Also, the increase is mainly explained by media, rather than brand pages, as seen in the below graph:

Facebook updates News Feed algorithm for video
Facebook is changing its News Feed algorithm to reflect increased video viewership. It will now take into account how long a user watches videos for, alongside typical engagement metrics (likes, comments and shares). Users who spend a lot of time watching videos can expect to see more, and vice versa.

Facebook updates its ads
Facebook has created a new ad unit that allows marketers to post up to three products in one advert. It’s heading to Facebook’s ads API first, but will be available in other offerings later in the year.

The network has also updated its Custom Audiences, allowing advertisers to target those who visit certain websites, and those who had visited them previously but haven’t done so in a while.

Secondly, it’s testing a WhatsApp share button, with some Android users noticing the feature in the Twitter app.

Google takes measures to separate G+ from search
Google is dialling back the prevalence of G+ information in search results. In a move supposedly aimed at creating a more unified experience across devices, when a search result brings up something authored by an individual, it will no longer display his or her picture, or how many people are in his or her Circles.

Foursquare charging for location data
Foursquare is charging its largest web partners for use of its location data. A number of companies use said data in providing their own services – they are now being charged if they surpass a certain threshold.

New Second Life planned for 2016
Linden Lab, the creator of Second Life, is preparing a second edition of the virtual reality world. It’s being built form the ground up, with 40-50 new employees. A beta version is expected in 2015, with the full release in 2016, alongside potential Oculus Rift integration.

The beeb on reddit
The BBC is expanding its social offering through a dedicated subreddit, r/bbcworld, as well as a video news channel on the site.

Quaker Oats sees success with Twitter and TV
Quaker Oats has released some impressive results from a campaign involving Twitter and TV. By promoting ten tweets when its adverts were shown, and targeting certain topics (cooking, entertainment and family, among others), the brand saw a 15.93% engagement rate and almost 90,000 clicks.

Heineken celebrates Gay Pride Month
Heineken US has produced a set of Instagram photos to celebrate Gay Pride month. The seven images are made up of the below, along with six images of couples, each set against a block background. When users scroll down the page, the photos come together to produce a rainbow.

A week in the social World Cup
The World Cup is set to be the biggest social media event of all time, with 12.2m tweets in the opening game alone. One of the biggest incidents of the last week was when Uruguay striker, Luis Suarez, appeared to bite an opponent and was subsequently punished with a four-month ban. The hour after the incident saw339,269 mentions of the bite and, naturally, a number of brands looked to react. Some of the most successful examples came from Netflix, Specsavers, McDonald’s Uruguay, Snickers and Bud Light.

Don't worry #Suarez, four months is plenty of time to devour House of Cards. One bite at a time.

Another nice piece of reactive marketing came from the adidas UK Twitter account, which changed its name to adidas Italia for one day only, when England needed an Italian victory in order to progress.

A number of brands promoted tweets around the USA vs. Germany game, with many using American patriotism and others recognising the importance of the event to a global audience. That’s something KLM failed to do; the Dutch Airline had to apologise for posting an ‘Adios Amigos’ tweet when the Netherlands eliminated Mexico from the competition via a controversial penalty.

Don’t forget to check out our round up of other goings on in the social World Cup.

Wimbledon and social media
It’s not just the World Cup that’s on this week. Wimbledon is more social than ever; the tennis competition has created a number of social media campaigns including live Twitter replays, photo booths in the famous queue and socially-sourced UGC shown on the screens outside Centre Court. Sponsors have been getting involved, too. We Are Social and evian have produced a campaign dubbed #LetsPlay that asks fans to tweet @evianwater with their most playful ‘live young’ messages. The best are being turned into mini musical films and sent back via Twitter and Vine. Meanwhile, Robinson’s wants to put an end to the #HenmanHill vs. #MurrayMound question and has created a video that pits Tim Henman against Judy Murray, which it will use to fuel an online debate.