We Are Social Asia Tuesday TuneUp #132

WeChat launches advertising platform
WeChat, the Chinese messaging service, has created an ad platform for brands with over 100,000 followers. Ads will only appear when users click on full-page posts from officials accounts that they already follow. Even then, the ad is not full screen, but shows up at the bottom of the page.

Facebook Messenger is the chat app of choice in the Philippines
While smartphone adoption is rapidly growing in the Philippines, it remains among the lowest in Asia Pacific. According to the new report from OnDevice Research, 80 percent of mobile users in the Philippines are regular Facebook messenger users, leaving behind popular chat apps like WhatsApp, Line and WeChat. Messenger is followed by Viber and Skype which both offer free international calls. This result may be attributed to the huge number of Filipinos working overseas keeping in touch with their families back home. 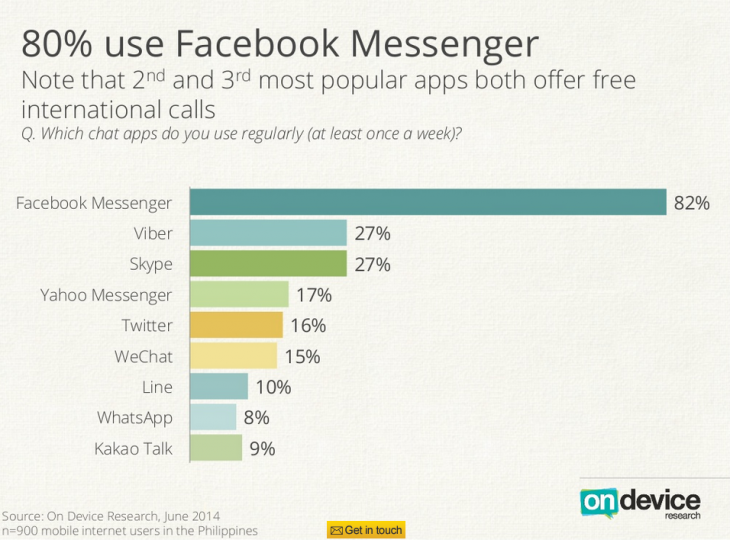 LOL Lah! curates top videos across Asia
LOL Lah! is a new site curating the latest lulz-worthy videos across Asia. It aims to be the “hub” for pop culture in the region where people could go to find regional memes, rather than only global memes. LOL Lah is created by Tamara Sanderson, a Singapore-based Google employee and creator of the app Timeaway that lets parents monitor and control their kids’ smartphone or tablet usage. She explains to TechinAsia that she uses YouTube Trends, sorted by country, to find popular new videos. Teaming up with a social media guru in the Philippines, they look for viral content online. According to Sanderson, Asia is one region but each country is very unique. For example, Singapore likes Buzzfeed-esque comedies, India is full of Bollywood favourites and Philippines loves basketball and the Voice Kids clips.

Senti, a social media tool fluent in Filipino and text-speak
Having difficulty listening and monitoring conversations in the Philippines because of the variations of English, Filipino, Taglish, and even text-speak? A new Manila startup, Senti, may be the answer. Senti wants to help companies and brands understand and have a better view of what Filipinos have been talking about online using Filipino, English, Taglish and other variations of the language. “Other variations” include text-speak, beki-speak (gay lingo) and coined words. After consolidating data from different social media streams, Senti uses it to come up with analytics and data insights about products, events and personalities. The startup plans to add the ability to forecast trends in social media in the local context in one of its features in the future. This plan also extends its value to television, where they can detect the type of shows Filipinos watch, for example.

Mobile social use is up, desktop slightly down
A new comScore report has explored the growth of mobile use in social, arguing that it does not come at the expense of desktop use. Between May 2013 and May 2014, the total number of minutes spent using mobile to access social media grew from 479bn to 687bn. You might expect to see a similar drop in desktop use, but you’d be mistaken: total desktop time did fall, but only from 477bn to 466bn.

Mobile and digital budgets are up
Digital advertising budgets will this year rise 16.7% to $140.15bn, according to eMarketer predictions. Spend on mobile/tablets will see the most signficant jump, up 84.7% to $32.71bn. By 2018, digital will account for a third of global ad spend, while mobile will be 70.4% of UK digital budgets, and 67.8% in the US.

Facebook adds ‘suggested videos’ to mobile
If you watch a friend’s video in your mobile News Feed, Facebook will show you a set of suggested videos, much like the ‘Related News’ feature. This is the latest Facebook update that seeks to encourage people to share and watch videos, and TechCrunch has accordingly likened it to a TV channel.

Facebook creates ‘Out-App Purchase’ ad
Facebook has launched a new ad type: the ‘Out-App Purchase’ ad, which allows those who develop Facebook games to sell virtual goods directly through the News Feed. Currently, the unit is only available for desktop, but, should it prove effective, we may well see a move in the lucrative mobile market.

Twitter goes all out on organic reach
Twitter is backing itself as the social destination for organic reach, telling brands that they can be seen by 30% of their followers for free by tweeting 2-3 times per day. Not only that, but it has released a set of organic tweet analytics, so that brands can now see how many users viewed or engaged with organic tweets.

The World Cup breaks social records
The World Cup is over too quickly, once again. According to Facebook, the final was the most talked-about sporting event in the network’s history, amassing a total of 280m mentions. One semi-final also managed to inspire a huge social response, as Germany trashed hosts Brazil 7-1. This was the most discussed sports game ever on Twitter, with 35.6m tweets in total. Germany’s fifth goal broke the record for global tweets-per-minute at 580,166.

Unsurprisingly, brands wanted to get in on some of the action. Below you can see examples from a huge variety of companies, from Visa and the Seattle Seahawks toSony, Paddy Power and adidas.

Only the best teams make it to the semi-finals of the #WorldCup. Congratulations to Germany and the hosts. #allin pic.twitter.com/5oYR9mFOco

Sour Patch Kids on Snapchat
Sour Patch Kids is to become the first Mondelez brand using Snapchat when it enlists the help of Logan Paul to run a week-long campaign. The social media star will send out Snaps from the brand’s account, detailing pranks that range from ‘sweet’ to ‘sour’.

Mercedes-Benz targets millenials on Instagram
Mercedez-Benz has launched a campaign on Instagram, dubbed #GLApacked, intending to target a younger audience. The brand has got Instagram influencers on board, each of whom has been loaned a GLA for a cross-country trip and asked to document it on the network.

4Music is searching for a vlogger
British channel 4Music is searching for its next vlogger through an online ‘Vlogstar’ microsite, sponsored by O2. Entrants need to submit a YouTube video for their chance to be the winner, who will be allowed behind-the-scenes on 4Music shoots and at gigs, producing several videos every week for the channel.

The CIA and Twitter
Last week, the CIA used the hashtag #twitterversary to answer some of the ‘top questions’ it had been asked since its launch on Twitter.

Sorry for not following you back @TheEllenShow. But if you visit us maybe we can take a selfie? #twitterversary

The above and other tweets like it have led to a debate over what the CIA’s strategy is. The humour may lead to a number of RTs, but questions have been raised about whether this helps the CIA’s chief objective: gaining trust. Indeed, this may be all the more relevant in the week when it has come to light that the activities of Twitter users were analysed by the US military in an attempt to understand how to influence people. News like this is likely to lead to increased debate about privacy, in which the CIA may want to be a major player.