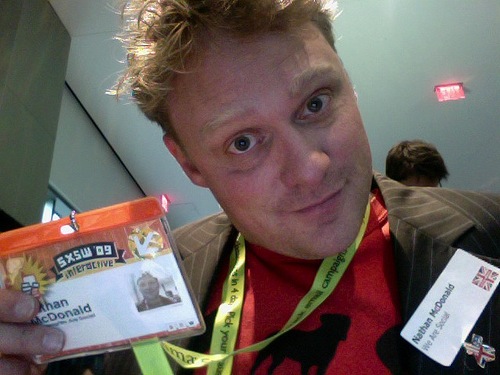 At SXSW, as Mike Butcher noted in TechCrunch UK, "everybody knows your Twitter name", and Twitter was essential to find anyone or anything.

On literally thousands of laptops and iPhones, everyone seemed to have their Twitter app of choice (mostly Tweetdeck from my observations) running constantly. In fact the vast swarms of geeks with iPhones overloaded the AT&T network until complaints prompted them to add network capacity.

The #sxsw hashtag became useless, so Digital Mission attendees kept track of each other using #digitalmission. At the unofficial "unpanel" we spontaneously convened, we "crowd sauced" the hashtag #kebab, with a live Twitter backchannel projected on screen.

Six to Start (who picked up a couple of awards for We Tell Stories - congrats guys!) ran an excellent panel on ARG's and bringing TV to the web with the BBC, which also projected a Twitter backchannel, though this was overshadowed by Clay Shirky asking one of the first questions.

Twitter monetisation became an ongoing topic/joke amongst panel members from start to finish, with Guy Kawasaki opening the closing keynote interview by asking “free” advocate and Wired Editor-in-Chief Chris Anderson what he would do if he were Twitter. Anderson was long on philosophy, short on detail: "How do you create the version of the product that people will pay for without crippling the base product?... Charge companies somehow, and build from there."

Some of the more interesting points came in the session afterwards, moderated by Doc Searls. Anderson observed that "catalysing and curating conversation is a big part of my job. My card says Editor-in-Chief but I'm really a Community Manager."

The irrepressible Gary Vaynerchuk was equal parts entertaining and inspiring, and although it felt more like therapy than a keynote, I agree with everything he said.

Of the more practical sessions, Kathy Sierra and Cliff Atkinson impressed in Presenting Straight to the Brain. Learning how to "seduce the brain" involves recognising that our brains are wired from caveman days, and  are usually in epic battle with our minds. In Designing for the Wisdom of Crowds, Flickr and Threadless were looked at in depth, as great examples of successful crowdsourcing businesses.

The Mobile Social Networking panel was, bizarrely, missing anyone from Fire Eagle, and seemed to get distracted by definitions and privacy issues until Martin May from Brightkite announced that "Monetisation is kind of boring," and finally started talking about mobile social networking!

Despite my plans the most interesting conversations have been serendipitous. It's amazing who you bump into randomly in the hallways and parties - here are a few snaps of some of the people I hung out with, bumped into or tracked down via Twitter...

You're going to be bombarded with lots of buzzwords in this post - don't be put off. By the end, you'll...