It had to end at some point...

After the third day of activity, Isaiah Mustafa and Old Spice have bid farewell to their ‘Internet friends’ and recorded their final YouTube video. Much has been written about the campaign over the last few days (see our case study with links here), and the buzz on blogs and Twitter have been explosive.

Here at We Are Social, we were a bit curious as to what the viewing figures looked like so we had a closer look at the Old Spice YouTube Channel. This is what we found:

How loved has the new campaign proven to be? 4Chan, the anonymous nihilist obscene messageboard from whence sprang memes like LOLCats and RickRolling, was the subject of [Anonymous]... 4channers hate everything, especially people who talk about 4chan - which this savvy man in a towel did not do.

And now it occupies the second most watched spot, which is no small feat.

This covers off on the publicly available viewing figures (which have surely grown during the time of writing this), but there is surely so much more that can be learned from how the online audience behaved with this campaign and from the viewing behaviour on YouTube. Things like:

The opportunities for measurement are almost endless, and Wieden + Kennedy / Proctor & Gamble are sitting on some very interesting data behind the YouTube account login. We definitely hope to learn more over the coming months.

Meanwhile Twitter over the last few days has been busy: 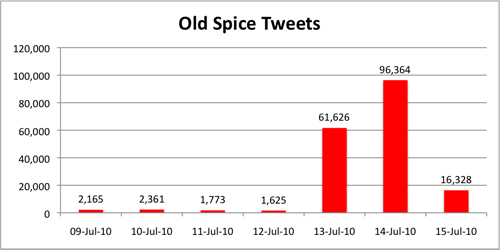 Since 13 July 2010 there's been about 175K Old Spice related tweets, and they were broken down as follows:

26% were retweets, which indicates how readily people passed around the content online. Meanwhile 8% were @replies, and the overwhelming majority of those were directed at @oldspice, showing that people were quite keen to get involved (even me). The remaining ‘regular tweets’ were, by and large, people commenting about the 'old spice guy’/'old spice man' videos as they watched, and shared the YouTube links. A cursory read of these Tweets were found to be extremely positive, which probably comes as no surprise. A word cloud, drawn from a sample of 10,000 Tweets from 13 July – 15 July tends to support this: 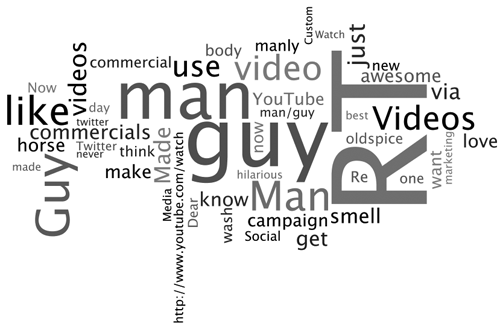 The words “Old Spice” and "@oldspice" were removed from the word cloud for clarity.

It’s worth noting that words like hilarious, like, love and awesome are among the 50 most prominent words of the 157,849 rendered in the word cloud.

So what now? It appears that Wieden + Kennedy and Old Spice have created a bit of a monster, but have phased out activity while it was still fresh and universally liked. I imagine the video viewcount will continue to climb as people make their way through all 183 videos, and the Twitter buzz will likely calm down. I expect attitudes towards the brand will remain positive, though it will be really interesting to see if this translates directly into sales.

As succesful as this campaign has been however, I can't say that I envy the people behind it... I mean, how do they top that? Naturally, we're hoping they (or perhaps even, we) do!

The Cannes Film Grand Prix-winning Old Spice campaign has evolved over the last 24 hours to dominate...