We Are Social's Christmas Cracker 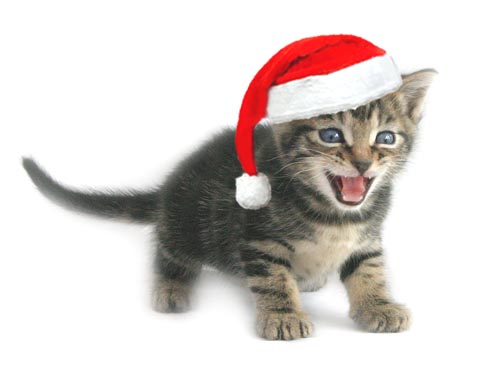 Here's our regular mashup of the week's social media news, delayed slightly by the Christmas break...

The years ahead will see increase spend on social media
Research from the Pivot Conference in October 2011 suggests that the next three years will see brands more than just experiment with social media - and with that, there will be a greatly increased spend on all things social. It's interesting that many of those questioned suggested that having seen the benefits of social media, they were happy to invest more, and the graph below indicates they plan to do just that.

What's the value of a Like?
Once again, people are trying to quantify the value of a Facebook 'like' or its equivalent on other platforms. But as our MD, Robin Grant, told Marketing Magazine, this is rather pointless - brands should ignore how many fans they have:

It's very hard to do, because it is right there in your face, but it is completely meaningless. From our point of view, what we try to do is link everything back to the business objective and build the KPIs around that.

As Robin alludes, it's not how many fans you have, it's what you do with them that counts.

How brands can come out on top in social
As the year comes to an end, this week has seen a series of articles about how brands can engage better on social media channels.

Marketing Magazine took a look this week at how brands can engage better in social media, and surfaced some interesting stuff, including this quote from our Consultancy Director, Simon Collister:

Social media shouldn't just be used as a broadcasting medium. If you promote the party line and people get back to you challenging this, it's harmful to leave these comments alone. This undermines your promotional activity, enabling negative customer experiences to go viral.

Forrester carried a noteworthy report on whether brands are 'doing Twitter right', highlighting the often overlooked point that Twitter is dominated by a minority of users. 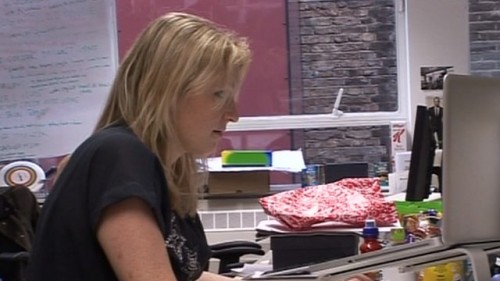 The BBC also came in to our London office to speak to us about social media - you can watch the full video here.

Facebook to include ads in News Feed, boost privacy
In a move which will probably prompt some anger, Facebook is to add Sponsored Stories to the News Feed in early 2012. It's the one area which has stayed ad-free, and although Twitter did the same thing, the crucial point about Twitter was that many influential users use different Twitter apps which can avoid the ads. The same isn't true of Facebook, which is why I think it may cause a backlash, despite Facebook's attempts to explain ads to users.

In more positive news for Facebook users, the social network has been ordered to step up its privacy policy and to stop holding data after users had left the site to go elsewhere on the web. Quite right too.

Google+ grows rapidly - but by how much?
Conflicting reports emerged last week about how many users Google + now has. Google themselves have been very quiet since the end of Q3, so there is some guesswork involved. GlobalWebIndex believe - based on their surveys - that Google+ has as many as 150 million users, but Paul Allen, somebody who measures actual user growth based on surnames, believes the number is 62 million, supplying the graph below as evidence. 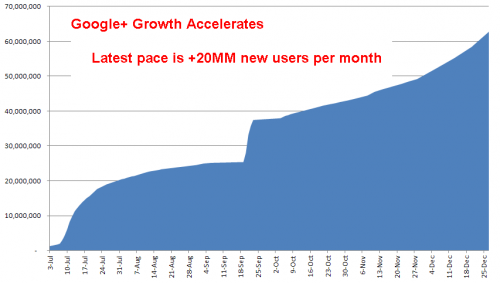 Either way, the numbers seem high considering anecdotally how few people seem to be using the site. Brett, from GWI raised a fair point about this though:

The main thing that springs to my mind is Google’s ambition to integrate social into everything it does as has been express by Google CEO, Larry Page. What this means is that Google+ will be a much more subtle part of its users lives than other social networks. Through the integration of its other services such as gmail, reader, picassa, etc., Google has essentially made Google+ the hub of all of Google’s social activities, and users of any number of Google services now have incentives to have a Google+ profile.

In other words, people aren't actively using Google+ itself; but their use of Google products makes them users of Google+. Makes sense. 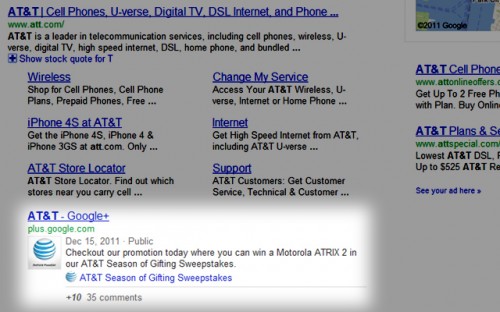 Pinterest: the next big thing?
Research from comScore shows how Pinterest has grown at an exceptionally fast rate since first hitting their radar in May - with the site now counting five million unique visitors a month. With the word Pinterest entering the lexicon, it's certainly something we're keeping a close eye on.

Loyalty points for check-ins
From now on, travellers on certain airlines - like Virgin America - can earn loyalty points by checking in on Foursquare or posting a geo-tagged picture to Facebook. Considering people love to share pictures of their holidays, this should work out as a good move - the brand gets positive sentiment, and the user gets something which will give them a discount off their next break. Nice.

In Union Station, in Toronto, stands a 30-foot Christmas Tree that relies on social media Christmas spirit to light it up. Created for Canadian Tire, a Canadian national retailer, the tree takes positive Christmas chatter in social media and uses the data to light up the 30,000 LED lights strung around it. Each colour of light represents Christmas spirit coming from a different social channel. White lights represent social networks like Twitter and public Facebook statuses, red for blog and forum posts, green for online news. The more social media spirit that comes in at one time the brighter the tree shines. As well, there are a few easter egg words (#santa, #snowflake, #magic) that you can send to the tree to make it do some pretty fancy light patterns.

Ikea hosts sleepover for Facebook fans
Ikea listened to its customers and gave them what they want. After 100,000 Facebook users joined a group called 'I wanna have a sleepover in Ikea' the brand made it happen for 100 of those users. And they didn't even have to make the beds...

Will social media engagement drive greater footfall for Strada?
Strada will be hoping the answer to that question is 'yes' if they're going to succeed. They're looking for user-generated photos and videos on social media platforms, and will be giving out vouchers to the best entries. Not to knock Italian restaurants for engaging in social media, this idea seems pasta its time.

FedEx deliver a strong response to a social media crisis

After FedEx were at the centre of a social media crisis thanks to the video above, they responded quickly with a human message, to resolve the crisis:

All brands can learn from this example, particularly how FedEx actually fixed the problem. Thumbs up.

#NHSxmas
Based on the traditional 'Twelve Days of Christmas' song, NHS London have been posting a series of rhyming tweets explaining the best places people can go to for treatment. Useful.

According to Twitter he was suspended for 'annoying our users' but considering the Unfollow button exists for a reason, this seems very weak. More to the point, considering Twitter prides itself on its role in the Arab Spring, it's disappointing that it's in the back pocket of the US government.

Anyway, we hope you enjoyed this year's Christmas Cracker - have a happy new year... 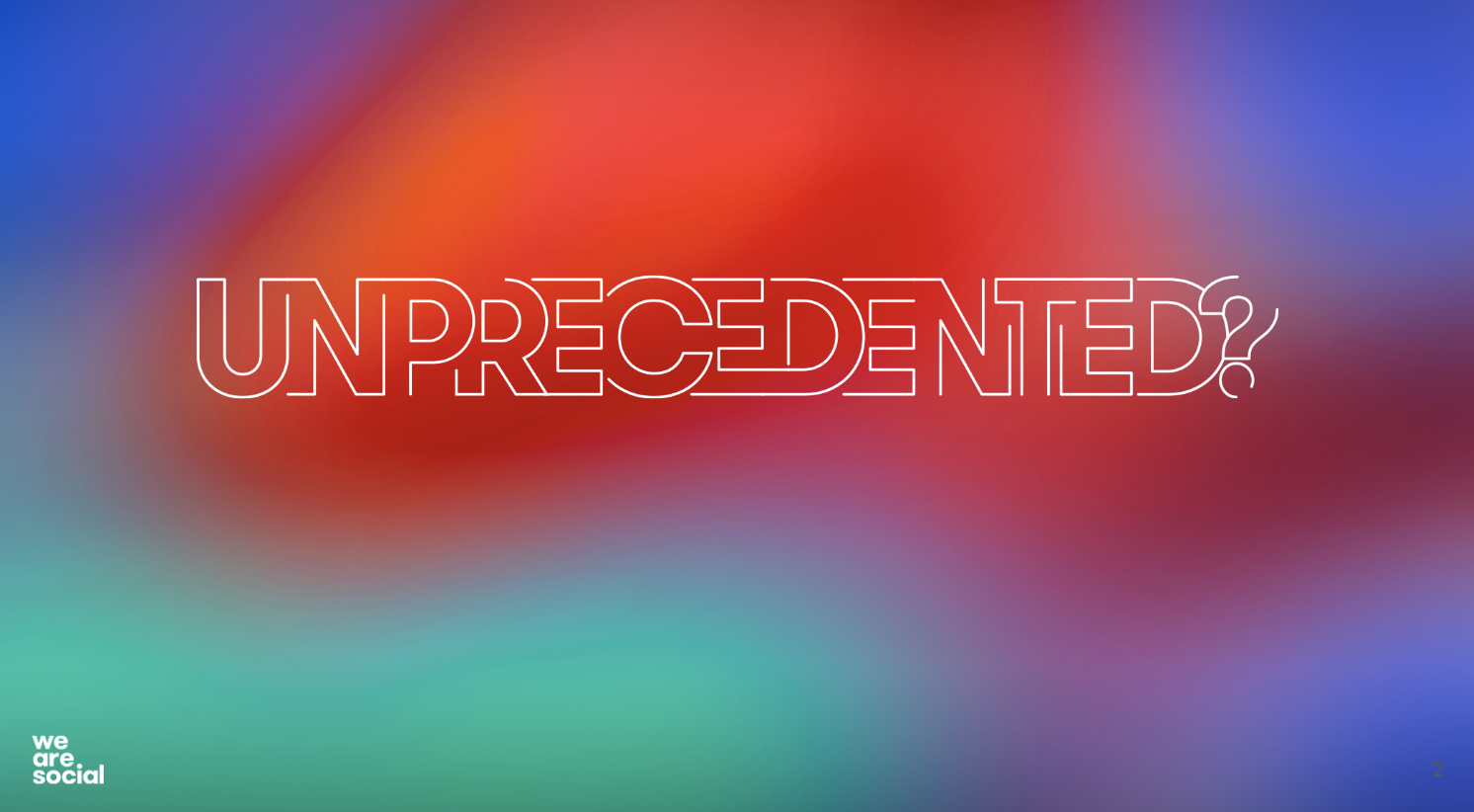 If headlines have told us anything during the first half of 2020, it’s that we’re living in unprecedented...