We Are Social’s Tuesday Tweakup #20

Chat Apps Continue to Grow
Yesterday, WhatsApp's CEO Jan Koum tweeted that the service now had an impressive 600,000,000 monthly active users and is continuing to grow at an astounding pace - gaining more than 9 new users every second. Other chat apps such as WeChat, LINE, Kakaotalk, Tango and Viber also appear to be increasing monthly active users. For more information, you can read our blog post on the subject.

Facebook Cracks Down on "Click-Baiting"
Facebook is cracking down on "click-baiting" headlines. They're the headlines that encourage people to 'click to see more', without giving away much information about what they will actually see. In an attempt to give users a better experience on the platform, Facebook will weed out these stories that many feel are clogging up their News Feed. 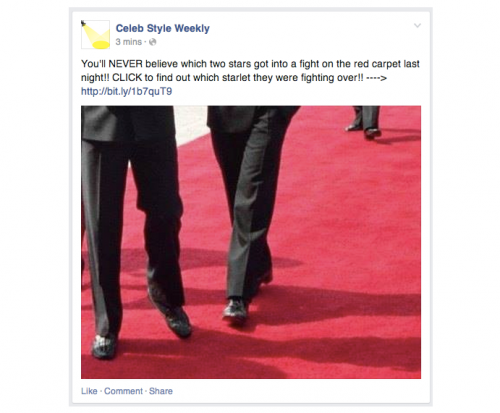 There was also an interesting second update from the platform, regarding sharing links in posts. Facebook announced yesterday that links that are shared by inserting them in the caption of a photo won’t do as well as those displayed in the link format (which appears when you paste a link while drafting a post).

We will not show more ads; rather, we are updating the spacing between ads, and relaxing some of the parameters around insertions of ads from the same advertiser.

Now, users may see the same ad twice a day; previously, the limit was one. Similarly, two News Feed ads may be served daily to users who haven’t liked the Facebook Page of the brand in question (again, up from one previously). The aspect that remains seemingly unchanged is the daily limit of four News Feed ads that can be shown to people who have liked a Page. 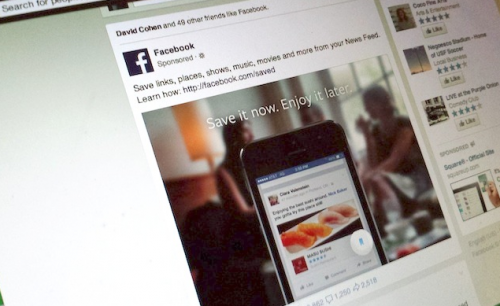 Instagram introduces Hyperlapse
Today, Instagram unveiled Hyperlapse, one of the company’s first apps outside of the platform itself. This all-new standalone app allows the creation of stabilised moving time-lapse videos. The app prompts you to record a video, after which it uses clever algorithm mapping and creates an ultra-smooth, floating-through-space type effect. The idea is to imitate not only the popular hyperlapse videos created using DSLRs and thousands of still frames, but also the cinematic motion tracking shots that appear in movies like Goodfellas and Kill Bill.

Instagram Starts Offering Essential Ad Tools
Instagram, the Facebook owned photo sharing platform, has finally made itself more ad-friendly by rolling out a suite of analytics tools. These are aimed at brands and offer various insights and analytics, including reach, impressions, engagement and the performance of paid ad campaigns.

Vine Finally Lets You Import Videos From Your Phone
Last week, the six-second video-sharing service Vine was updated to allow users to upload existing videos onto the platform; granting the wishes of many, especially marketers. The move should encourage people to use the platform more often - the absence of this feature, until now, has resulted in some users opting for Instagram instead. In addition to video import, the Vine app will also let you edit the imported video, though only on iOS versions for now.

SlideShare Axes Its Freemium Model
SlideShare, the presentation-sharing platform with 60 million users owned by LinkedIn, announced last week that it is making its PRO level features, such as analytics, free, but claims there will be no update on advertising for now.

Pinterest's new News feature
Pinterest has updated its mobile notifications section with a new feature, "News". This new tab gives you a snapshot of what’s up with your Facebook friends and all the different Pinners or boards you follow. You can now learn about latest projects people are collecting Pins for, or interesting brands they are following. The one thing you won’t see are Pins that people save to their secret boards - after all, they have to keep some element of mystery, don't they? 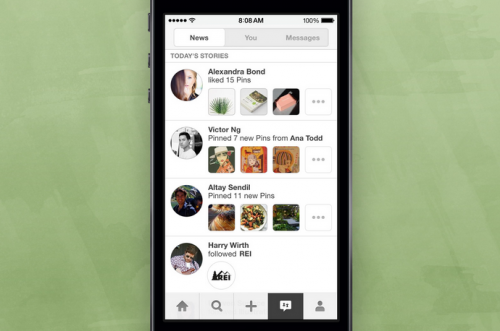 Pinterest Launches A New Analytics Dashboard
Pinterest has also launched a new analytics dashboard that gives business users more insight into their Pinterest account, providing potential advertisers with a glimpse of their mobile and audience analytics for the first time. It tracks impressions, clicks, repins, and likes. Essentially, the dashboard is designed to provide a quick view into a business’ overall reach on Pinterest, and help those brands better understand how fans are interacting with their content. 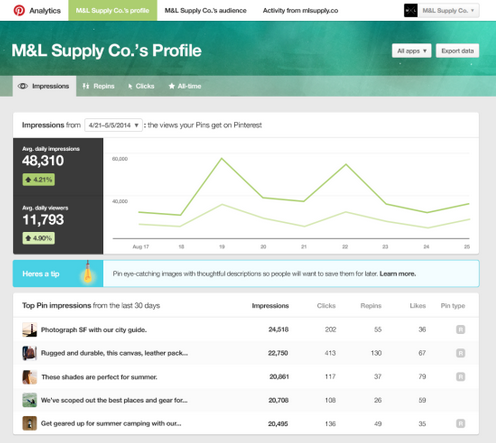 News and Ads to Debut on Snapchat
Snapchat might expand its service to videos, news articles and ads. A new service called Snapchat Discovery which would show content and ads to Snapchat users, has been discussed with various media companies. Set to debut in November, this could be an interesting move for the startup, whose 27 million users worldwide are used to an ad-free platform - but the offering could provide Snapchat's first revenue and demonstrate its potential value to investors.

Funny or Die Reveals 10 Percent of Its Kik Fans Click on Video Messages
Will Ferrell’s comedy video website, Funny or Die, is among a handful of brands testing Kik Messenger’s new Promoted Chats product which enables marketers to promote their accounts, accumulate contacts and connect with them; it has been dubbed "chatvertising".  The digital comedy crew has seen a 10 percent click rate, quite remarkable considering on average they achieve around 0.5 percent on similar Facebook and Twitter posts.

Gap Runs First Social Campaign for Kids' Accounts
Gap Kids is continuing to use UGC to drive awareness of the brand. The “Gap Kids Class of 2014” campaign - the latest round in its Casting Call programme - encourages parents to upload three photos of their child in back-to-school clothing via either Instagram, Facebook, a desktop or mobile phone for next year’s campaign. After submitting their photos, they are emailed a 15-second imitation Gap commercial for sharing via social media. Those fortunate enough to triumph will be whisked off to New York, London or Tokyo for a photo-shoot in preparation for the retailer’s 2015 window displays. 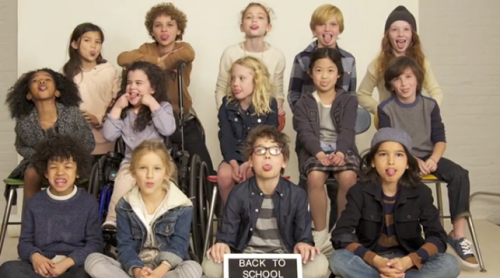 PacSun, StyleHaul Partner in Back-to-School YouTube Campaign
In a similar back-to-school move, StyleHaul - an online community of 150 million YouTube subscribers dedicated to women’s fashion and beauty - is set to take centre stage in PacSun’s latest campaign. With  more than 3.5 million subscribers between them, beauty and fashion experts BeyondBeautyStar, Macbby11, MyLifeAsEva and MamaMiaMakeup will encourage viewers to submit their own brand and style ideas around PacSun’s Bullhead Denim range. Gary Schoenfeld, president and CEO of PacSun, discussed the company's decision to embrace the YouTube strategy:

We know that YouTube stars have influential power with their fans—even more so than celebrities, in some cases—so for us, it was the perfect opportunity to showcase PacSun and its product in a new way. 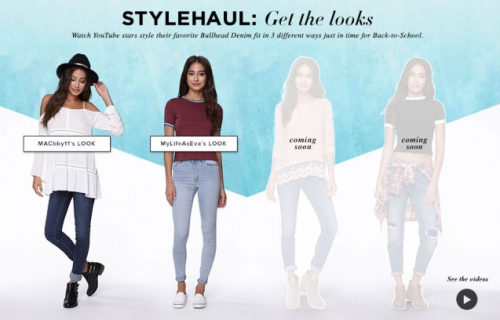 Uncle Ben's launch YouTube cooking show
As part of a campaign to encourage parents to cook with their children, the Mars food brand Uncle Ben's has created a YouTube cooking channel. A campaign called "Ben's Beginners" launches today, in an attempt to get kids cooking. Going forward, there will be weekly YouTube shows to demonstrate to kids how to cook meals using the brand’s products. Celebrity chef Lisa Faulkner will also front a cooking competition with a prize of £10,000 worth of cooking equipment for the winner’s school kitchen. 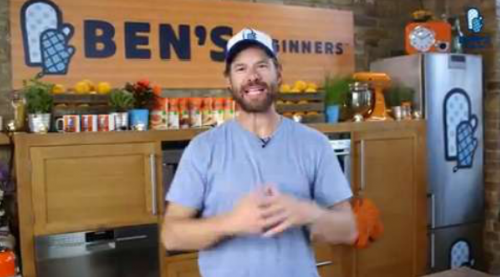 Newcastle Brown Ale asks consumers to send in 'mediocre' photos for ads
The latest campaign by Newcastle Brown Ale pokes fun at user generated content. The alcohol brand has created a social media-driven campaign inviting people to send in rubbish photos of themselves and embrace their mediocrity. The video for the campaign boasts "We can turn any photo, no matter how boring, into an ad to sell Newcastle". 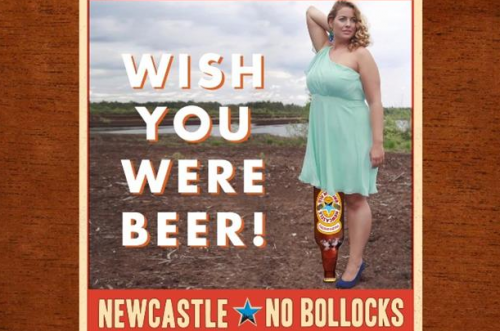 People are asked to post their "mediocre photos" on social media using the hashtag #NewcastleAdAid, and the brand tells them, "if you're lucky, we'll exploit your photo." The campaign is a clear gibe at rival beer brands' use of selfies and customer photos (Miller Lite recently launched a campaign using just those, collected from its #itsmillertime campaign).

Now you can Customise a Car in a Tweet
Acura may have accomplished a real Twitter first: the ability to customise a car in your Twitter Feed. That's right, Acura is trumpeting the launch of the 2015 TLX performance luxury sedan by letting you create a customised car, within the platform. The tweet uses the revamped version of the new Twitter cards, which now let you add photos, videos or other media in the card itself. 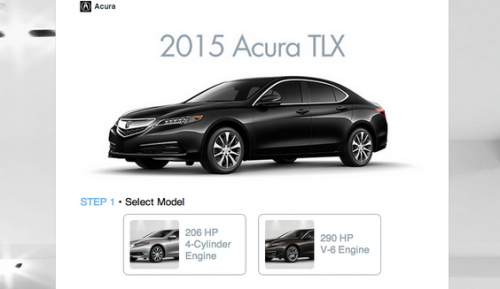 Compare The Market trials Facebook Premium Video advertising
Comparethemarket.com has become the first UK brand to trial Facebook’s recently launched Premium Video ad format. The new format works by playing automatically on a users feed and only plays sound when clicked, much like the current embedded function. The advertiser has paid to reach 5.6 million of Facebook’s 26 million UK daily active users within a 24-hour period, with a bespoke video featuring the brand's much loved meerkat characters. Initial results have not been shared but stay tuned for performance updates.

UK baker Greggs saves Logo Blunder on Social
Greggs engaged in some top social media banter last week after it emerged that Google had been fooled into displaying a rather offensive spoof logo instead of Greggs' own. The baker handled the crisis in style on Twitter, responding to critics, making a cheeky public appeal to Google for help, and introducing the hashtag #FixGreggs.

Facebook Launches 'Mentions Box' Device During Emmys
The Emmys took place this weekend, and Facebook debuted the Facebook Mentions Box, an interactive device that stars could wield to answer questions from fans. It's similar to the InstaStop Video Q&A Station that Instagram launched at the Golden Globes in January. 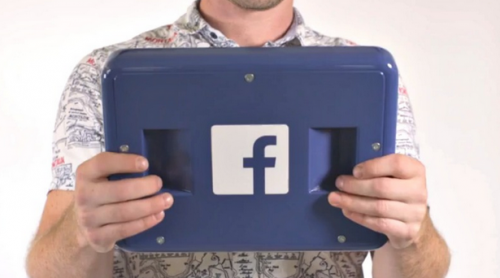 Brands out in Real-Time Force at the Emmys
And of course, brands jumped on the real-time marketing bandwagon that accompanies any major event these days. The real-time winners included Netflix, which embraced presenter Jimmy Kimmel's mocking of Ricky Gervais' 'Netflix face' with one of the best tweets of the evening.

However, it wasn't all good. Mercedez Benz showed a lack of understanding of the 'real time' concept with this unimaginative tweet sent a full four days before the event.

And the Emmy for sound mixing goes to… the all-new C-Class’ available Burmester stereo! http://t.co/YlEUK5hmS1 pic.twitter.com/0SR8FOyY2O

Puma’s Twitter Hashtag Campaign Just Went Very Wrong
Puma was caught out in spectacular fashion when Twitter pranksters hijacked their campaign. Whilst trying promoting ‘Forever Faster’, Puma asked fans to tweet their favourite Puma-wearing player to get a personalised “autograph” Twitter card. As you’d expect, things all went terribly wrong when rival fans changed their Twitter names to resemble some not so nice phrases to accompany Puma’s messages, which were tweeted back to the user. Here are some (of the tamest!) examples… 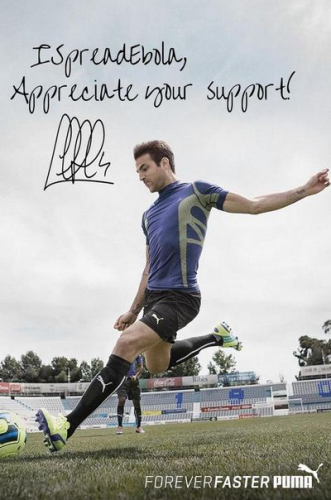 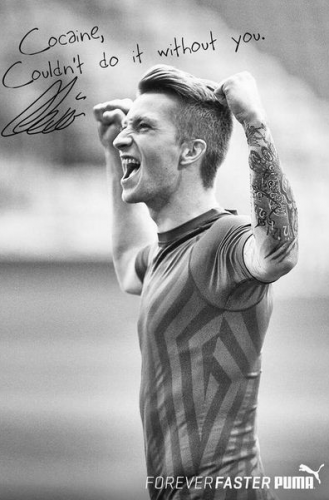