Oh 2018, we hardly knew thee. As the year wraps up we - and the rest of the world - are taking a look back at all things this 18th year of the millennium. Google released their end of year trends and (not shockingly) the World Cup was the #1 search this year (did someone say it's not coming home?).

Honourable mentions go out to Meghan Markle, Bitcoin and a wide variety of Australian politicians who also made the honour roll. You can check out Google's end of year video here, but have your tissues ready.

YouTube follows in Tumblr's footsteps to clean up their game

In one HUGE swoop, YouTube has removed over 58 million videos from their service in an effort to cleanup their offering. The online giant has said that the move was to remove inappropriate, adult and hateful content from their site. A spokeswoman from the service has said that the company uses a mix of human and computer algorithms to detect the content and it is confident that the new algorithm will stamp out anything inappropriate.

Industry experts and analysts predict that Instagram will play a large role in the 2020 election, too. How long before their poll feature starts counting towards actual votes? Only time will tell....

Social media overtakes newspapers as a go-to source of news in the US
To be honest, I would have thought this headline was from like five years ago, but apparently 2018 was the first (documented) instance of the evolved digital news landscape. According to a new report from Pew Research Center, for the first time ever more adults in the US now get their news from social media than from print newspapers. Last year, the number of people who read their news on social media was on par with those who read newspapers, however, this number has now jumped to one-in-five US adults compared to 16% for newspapers. Despite this shift, social media is still lagging behind other traditional news sources, such as TV and radio. 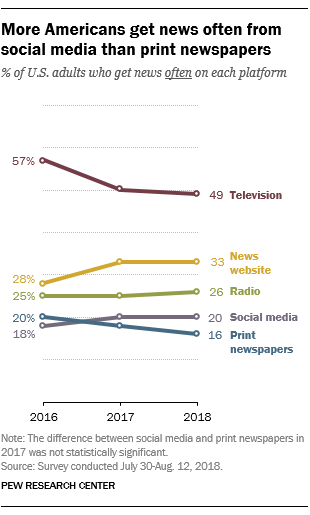 Facebook brings back search ads
After its initial foray into Sponsored Results back in 2012, Facebook is now looking to bring them back as the platform announced it's testing search ads in its search results and Marketplace with a small set of automotive, retail and e-commerce industry advertisers in the US and Canada. The new ad format will be "repurposed News Feed ads featuring a headline, image, copy text and a link in the static image or carousel format that can point users to external websites". It's hoped that search ads will prove an effective additional revenue stream, as Facebook continues to see great results with new formats such as advertising within Stories.

Facebook Watch scales up its ad offering and tests live slots
Facebook's TV-style service, Facebook Watch, will now let brands across 40 countries - including India, Singapore, Italy and Hong Kong - buy ad space within its content. In the new year, the platform will also begin testing new placements, such as the ability to slot ads into influencers' live streams, and it will be looking into the potential for wider sponsorship deals. The platform claims that "each month, 400 million people now spend at least one minute using Watch" with 75 million daily users spending on average more than 20 minutes on the feature.

Facebook adds games, a web browser and more to its Portal device
After receiving a bashing from the critics since its launch, Facebook has added a whole host of new features to its Portal device including a web browser, several of Messenger’s Instant Games, new augmented reality features such as Masks, a manual zoom mode, and more as a way of enticing buyers. The platform has also said it's hoping to add Google Assistant to the device in the future, though no work has currently been done on this.

Instagram tests Creator accounts with special features for influencers
According to the Hollywood Reporter (a highly credible and intellectually stimulating source...), Instagram is currently testing a new type of account for influencers with large followings that will grant "access to insights about follows and unfollows, as well as the ability to filter direct messages from different groups of followers (such as brands and IRL friends)". It will also allow them to control how others can contact them. The new Creator accounts are currently being tested with a small number of users but are expected to be rolled out to more users in the near future.

Instagram brings voice messaging to Direct Messages
Voice messaging is coming to Instagram DMs. The platform has rolled out a new feature for iOS and Android that will enable you to send audio messages up to one minute long in private and group chats. To use the new feature, simply hold down the microphone button and speak. Users then have the choice to send or swipe to delete and record again. 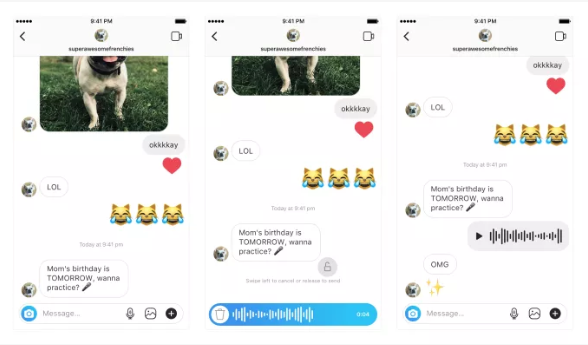 Snapchat introduces new location advertising features
Snapchat is releasing a suite of new location advertising features for retailers. The first, its visitor re-engagement audiences option will allow advertisers "to retarget previous visitors to their stores and create lookalike audiences based on those visitors", as well as select the frequency of the visitor they wish to target. The platform has also introduced a new chain locations targeting feature, allowing retailers to create a radius around locations to easily scale campaigns. These build on the "good performance" of location targeting and filters launched this year.

The popularity of gaming video content soars in 2018
Gaming has continued to grow as a cornerstone of internet culture this year as more than 200 million people now view gaming content on YouTube - equating to more than 50 billion hours of video content in the last 12 months. Added to which, video-game-centric platform Twitch also now sees 500,000 streamers going live every day, with streamers per month topping 3 million this year.

adidas lets you virtually try on trainers in new AR promotion
adidas is giving its fans a new way to try on the latest trainers and Snapchat a new reason to try and remain relevant, kind of... In its latest ad campaign utilising Snapchat's AR capabilities, the AR option lets you select a pair of shoes, which are then placed on the ground via the Snap camera so you can see how they'll look on your feet.

The campaign is a great showcase of how Snapchat's AR tools can be used to promote other items within the fashion space, with Sephora and Amazon already making strides there, too. The new adidas Snapchat Lens is currently available in selected regions.

Netflix and Samsung launch Netflix's first Australian Original series
Speaking of AR, we dabbled in it a bit ourselves last week. In case you haven't seen, Netflix just launched their first-ever Australian Original series - Tidelands - and they partnered with Samsung to bring viewers deeper into the Tidelands world and give them a unique AR perspective.
Pairing two of the world's most transformative tech and content companies seemed like a no brainer. The fully immersive launch experience, which is live until 31st December, creates a stunning underwater world for Australians to explore while also offering a chance to win Samsung and Netflix prizes.
To enter, fans must first engage with the 'Discover Netflix's Tidelands with Samsung' Messenger bot on their mobile device, where they can activate the Messenger camera effect. They can search the underwater world for broken pottery pieces, which will digitally reconstruct a mysterious vase and act as their submission to win. Keen for a dive? Check it out at m.me/Samsung.NetflixTidelands/?ref=welcome.
Oh, and catch Tidelands on Netflix! #shamelessclientplug