Facebook Global Trends
Facebook have released a review of 2012 on the platform, including the most important trends in the US. These are divided into events, songs, movies, check-ins, public figures, books, technology, politics, television, sports and memes. Unsurprisingly, the presidential election was the highest trending event and Barack Obama the most popular figure. The Hunger Games had a good year too, trending highest as both a film and a book, whilst the NY Giants did as well off the field as they did by winning the Superbowl on it. The site have also produced a way to view your own highlights of 2012.

Facebook UK Trends
In addition to their US data, the social network have released what were the most talked about topics in the UK. Unsurprisingly, the Olympics came in at number one, with Usain Bolt also making it to the top ten. The Queen's Diamond Jubilee received a lot of attention too, whilst you can paint a decent picture of what was entertaining everyone in the worlds of music, film and television. One Direction, Fifty Shades of Grey and X Factor contestant Rylan Clark were all present in the top ten trends. 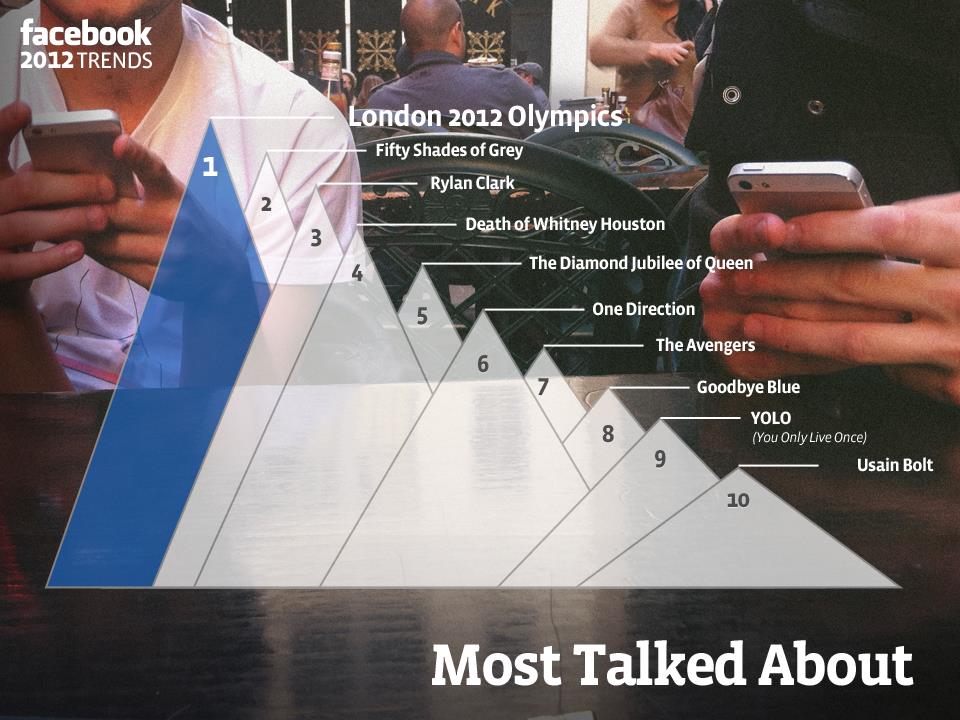 Twitter Global Trends
Twitter, too, have released a review of the top trends of 2012, complete with video. The top tweet came from Barack Obama, showing a picture of the president embracing his wife Michelle and the words "Four More Years". This was followed closely by Justin Bieber tweeting "RIP Avalanna. i love you", in reference to the tragic death of a six year old fan he had befriended. Many of the top topics were similar to those on Facebook, with the presidential election, Olympics and Super Bowl all proving popular on Twitter. The microblogging platform has also produced a site where you can read about the most significant Twitter moments of 2012.

Twitter UK Trends
Twitter also released a look into the behaviour of the UK on the platform. The Olympics, once again, proved popular, with the biggest spike in conversation coming when David and Samantha Cameron enjoyed a dance with Boris Johnson at the closing ceremony. Based on the number of tweets sent per second, three of the ten most popular topics related to the Olympics, three to Euro 2012, another three to X Factor and one to the Champions' League. Other popular trends included the Paralympics, David Cameron and the NHS.

YouTube Global Trends
YouTube, too, have released what were the top trending videos worldwide in 2012. Unsurprisingly, these include Psy's 'Gangnam Style' and Carly Rae Jepsen's 'Call Me Maybe', so the video sharing platform has created a summary of their year to the tune of these two massive hits, entitled 'Rewind YouTube Style 2012'. Some of the other videos included are KONY 2012, Felix Baumgartner's jump from space and Walk off the Earth's cover of 'Somebody That I Used to Know' by Gotye.

YouTube UK Trends
They've also included a summary of the top UK trends. Many of the worldwide top performers are in there, but these are joined by a few classics from Britain's shores. James Bond escorted the Queen to the opening ceremony, ladies were invited to purchase fish for just £1 and Nick Clegg sang an apology to the country. On top of this, some of the most popular auditions from Britain's Got Talent and the X Factor were watched again and again.

We Are Social's Monday Mashup #548