64.3% of Sina Weibo users watch online videos through Weibo interface
As reported by Tech in Asia, an agreement has just been made by two of China's biggest players in social media - Youku Tudou videos will now be promoted on Sina Weibo. Whilst 76% of Sina Weibo's 500 million registered users are actively accessing Weibo through mobile devices daily, Youku Tudou has around 170 million mobile video hits each day. The promotion will launch in July 2013. Users will be able to click on the link of the video homepage and interact with other users. Upon searching for movies and TV sitcoms through Weibo, direct links will appear that takes the user straight to Youku or Tudou streams, thus improving their overall experience of watching videos through Weibo itself. In a recent report by Sina Weibo in April this year, 64.3% of Sina Weibo users have watched online videos solely through the original Weibo interface. From the amount of video links shared on Sina Weibo, Youku and Tudou views made up 47.7% and 15.3% respectively. Thus, this new agreement will bring more market share for both parties involved. 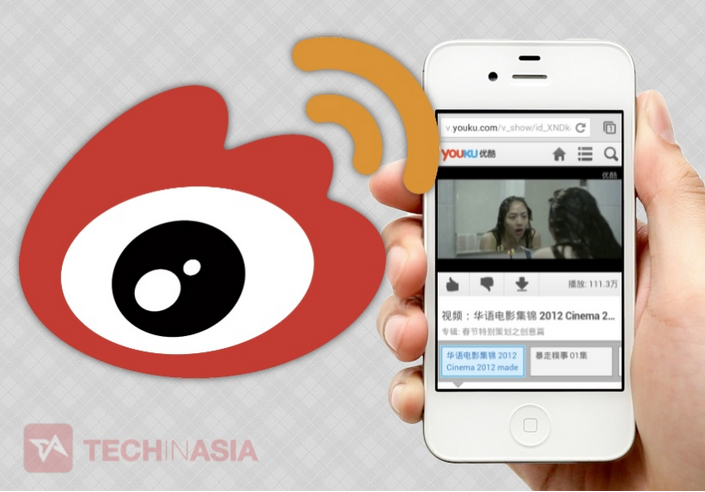 Line targets 20 million users in Taiwan
In Taiwan, Line's popularity is steadily increasing and they are set to reach 20 million users by the end of 2013. After succeeding the 10 million mark in January this year, Line has almost reached one half of the country's overall potential. Kang Hyun-bin, the head of Line Plus Corp.'s business office in Japan pointed out that Taiwan is one of the top-tier markets that Line was aiming for. As Line continues to be high-ranking amongst the cornucopia of free messaging apps, more smartphone users are enjoying Line's free functions such as free calls and its medley of emoticons at their disposal. Kang Hyun-bin has said that Line will continue its strategy to remain a free messaging app, and will continue to work with Taiwanese enterprises to host more promotional campaigns. In the meantime, Line are still aiming to expand into more new markets, as a means in which they can compete with the likes of WeChat and Kakaotalk.

New dating platform reaches 3,000 users in Indonesia and Australia
TristUp , a platform that allows people to level up their friendships has gained significant popularity in Indonesia and Australia. Users are able to choose which friends on Facebook they want to hook up with secretly. Launched last month, it received 500 registered users in the first three days, but after one and a half weeks, the site reached almost 3,000 users with no marketing efforts. More dating features will be applied on the platform, such as a chat-like platform and mobile app. As Tech in Asia reported, the platform is now targeted at Indonesia, with focus on singles aged between 16 and 28. Yudhi Mandey, the developer of the platform, believes that TristUp can help them fill that need anonymously, and will start pushing Indonesian targeted ads within the month of June. 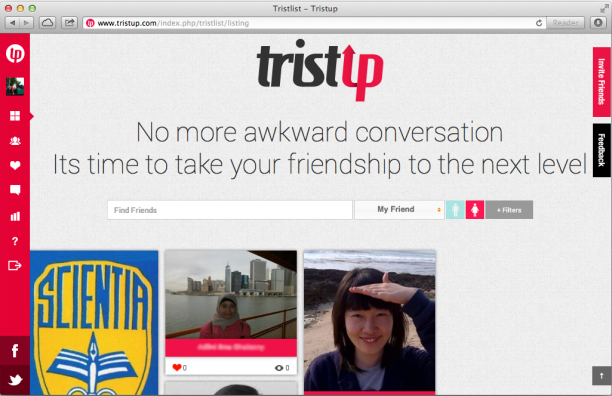 More Australians access social media sites via mobile
According to a recent survey by the Australian Interactive Media Industry Association (AIMIA), Australians are becoming increasingly more social and mobile, as a direct result of social media being more available through the high penetration of smartphones. 45% of Australians are reported to log onto any given social media site at least once a day in 2013, this figure is up by 9% more than 2012. So far in 2013, 67% of social media users access these sites from their smartphones, and 35% access these sites through their tablet devices, both of which are almost double the amount compared with 2012 figures. Facebook holds its spot as the most prominent social networking site, despite traffic dropping from 97% down to 95% between 2011 to 2013. Twitter and LinkedIn have both experienced increases in usage within the same time frame. 15% of Australian social media users are using Twitter, whilst 20% are using LinkedIn in 2013. The report suggests that brands must focus on the increasing shift towards other forms of social media sites, instead of solely being focused on Facebook as their primary means of communication. Sites such as Twitter and LinkedIn that are on the rise, should be considered as important components of a brand's marketing strategy. 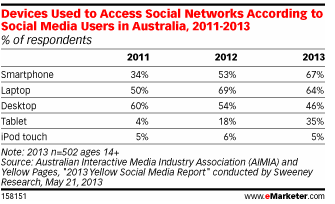 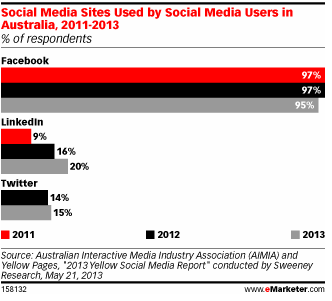 Google gaining more than 50% of revenues in mobile Internet ads
According to eMarketer, in 2012 Google took more than 50% of total revenue from worldwide mobile Internet ads. They predict that by the end of 2013, the company is set to double its revenue to $8.85 billion. In addition to Google, companies such as Facebook, Pandora, YP, Twitter and Millennial Media are the other main players within the market. Total combined revenue of the five companies previously listed only makes up about 13.3% of total world revenue. Facebook is the second largest player within the mobile market industry with revenue of $47 billion in 2012, and predicted to skyrocket by almost 333% in 2013 to make revenues of around $2 billion. Twitter is also expected to follow this growth spurt and is set to increase revenues by over 100% in 2013. Both companies have exponentially grown from a standing starting point in 2011 and are currently experiencing rapid revenue increases alongside Google. Companies such as Pandora and Millennial Media however, have suffered from a decrease in mobile market share. 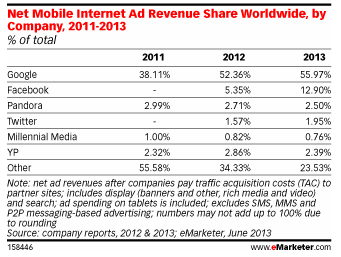