This month's Digital Statshot - the third in We Are Social's on-going series - brings another set of impressive numbers for Social, Digital and Mobile around the world.

The site reports that there are now 7.324 billion active mobile subscriptions around the world, which is 44 million more than the total world population as reported by Worldometers. 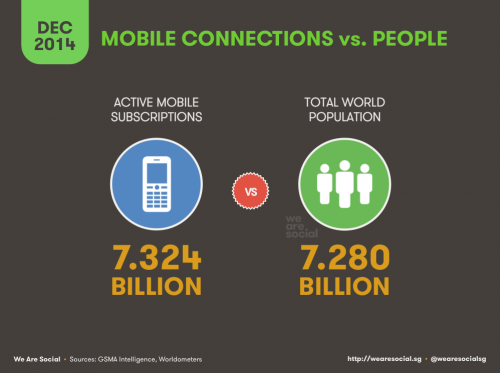 However, it's worth remembering that the average mobile user still maintains 2 active subscriptions, and at 3.636 billion unique users, global mobile penetration still sits at just 50%.

The active subscription datapoint still has significant importance to marketers though, reflecting the increasing importance of mobile devices in people's lives all over the world.

The continued growth may also reflect a diversification of our 'device portfolios', with people adopting a variety of devices including smartphones, feature phones, tablets, and other mobile-connected devices.

Indeed, Ericsson reports that smartphones now account for 38% of all connected devices, with 2.7 billion smartphones connected around the world.

Another interesting stat in Ericsson's November Mobility Report is the growth in mobile broadband subscriptions around the world, which now stand at 2.9 billion.

However, Ericsson also reports that 80% of the world's mobile subscribers are still GSM only, so there's still plenty of room for growth in faster mobile connections.

Social
This month's big headline in social is the huge jump in Instagram's reported monthly active users: the world's favourite photo-sharing platform now claims 300 million active users, up 50% from their previously reported MAU figure from just a few months ago.

This puts Instagram in joint 8th position on the global rankings, on par with Skype, and now ahead of Twitter's 284 million active users: 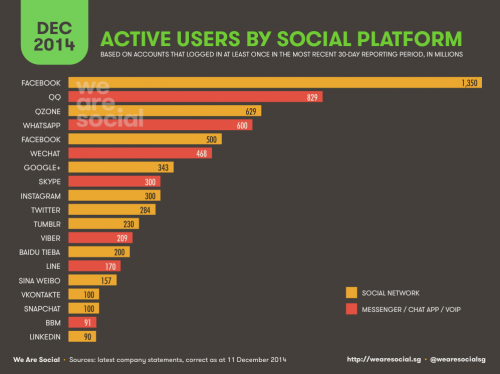 However, we've significantly revised our numbers for LinkedIn following the company's recent earnings report. This is the first time that we've seen the company make such a clear distinction between active users and 'members', as LinkedIn refers to its total registered user base.

LinkedIn reports that it has 90 million unique users per month from a base of 332 million - far fewer than the 186 million that we reported in our previous statshot.

There are now 2.06 billion active social media users around the world, with 82% of these accessing via mobile devices each month.

Internet
Global internet users continue to grow at a steady rate, with InternetLiveStats reporting 3.025 billion active users around the world.

Looking for country-specific figures? Our regional reports contain stats and data points for over 100 countries around the world, and have already been viewed more than 1.6 million times in 2014 - read and download them all here.