A wealth of new data has contributed to impressive growth across various aspects of digital over the past three months, so our new Digital 2019 Q4 Global Digital Statshot report – produced in partnership with Hootsuite – has plenty of juicy headlines, as well as essential insights for brands and organisations preparing 2020 digital plans.

You’ll find all the latest numbers in the SlideShare embed below (or click here), but read on below to get richer context and insights into this quarter’s top headlines.


Big jump in internet user numbers
The number of internet users around the world is now 400 million higher than it was this time last year, representing annual growth of 10 per cent. 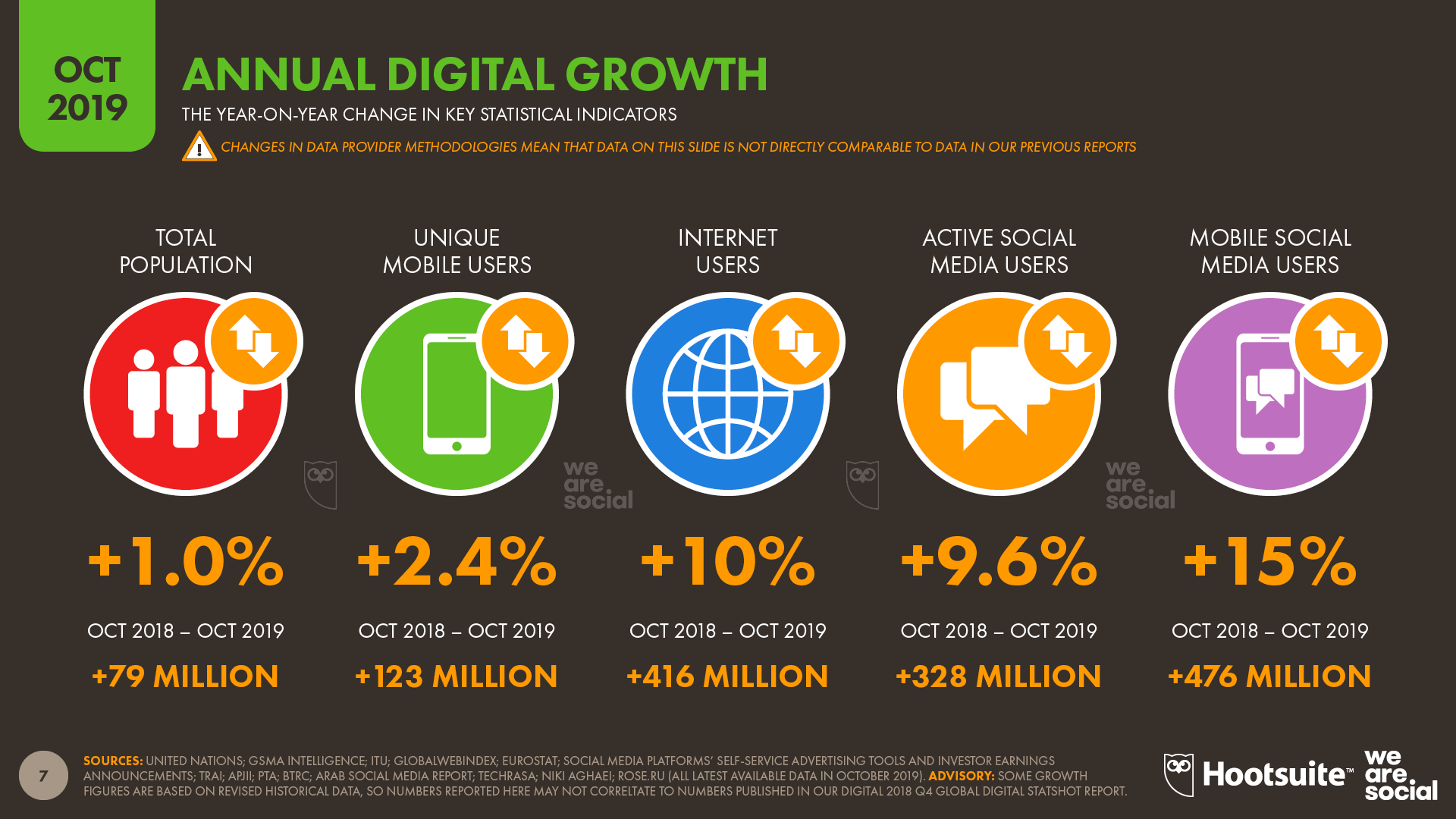 These figures suggest that almost 30 per cent of India’s total population already uses WhatsApp each month. What’s more, with the number of mobile internet subscribers in India growing at a rate of more than 250,000 every day, there’s still plenty more opportunity for social media growth in India.

Other platforms belonging to Facebook Inc. and Tencent also contributed to overall growth in social media user numbers, but there are some interesting trends emerging at the individual platform level, as we’ll see below. 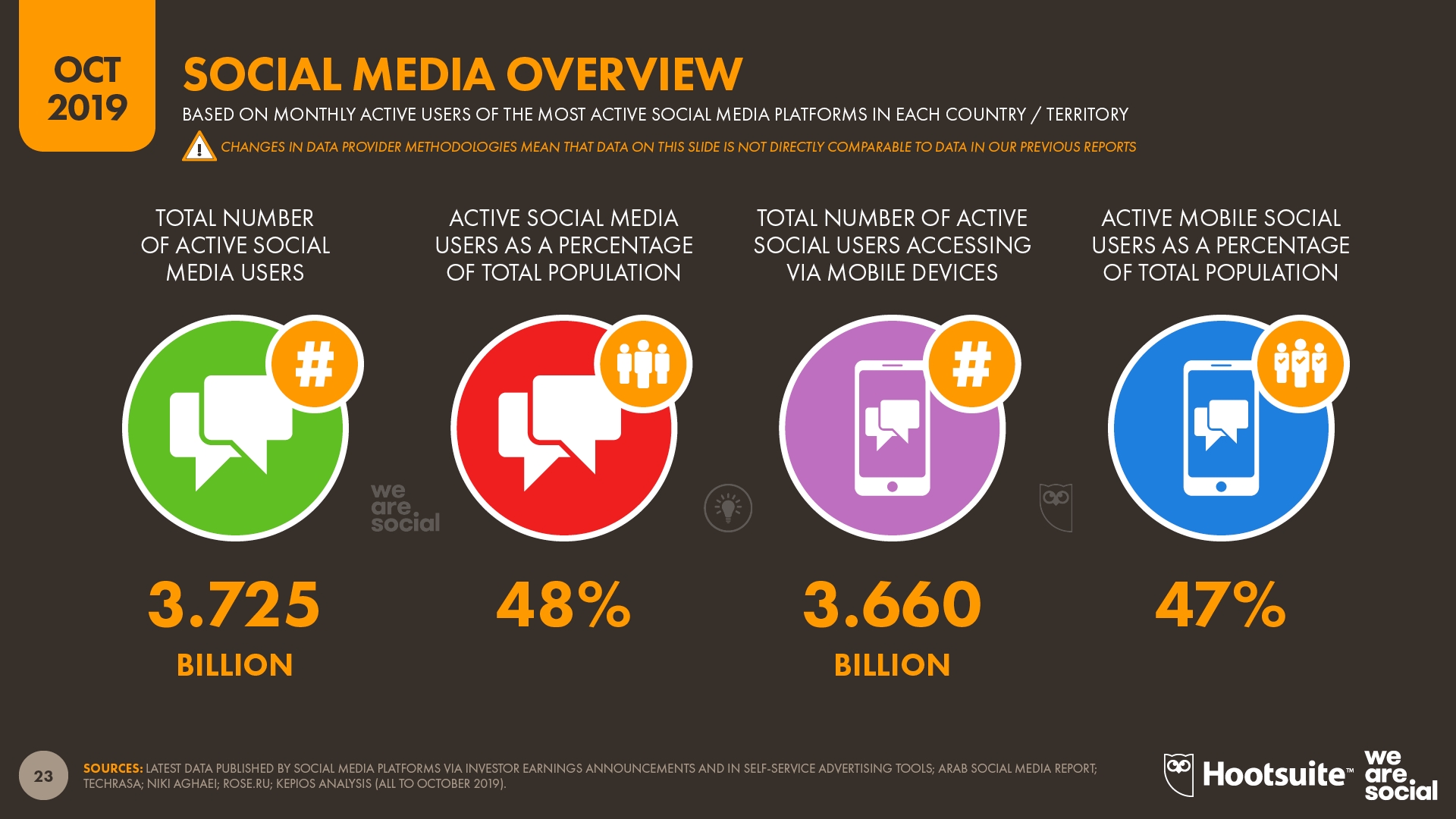 Facebook’s ad audience growth slows
Facebook’s core product saw significantly slower growth in its advertising audience numbers over the past three months, with the platform adding just 8 million new users between July and September 2019. At just 0.4 per cent, this quarterly growth rate is significantly lower than the 3 per cent growth in advertising audience numbers that the platform delivered in the second quarter of this year.

Meanwhile, individual country figures tell an even more interesting story. Facebook’s own advertising tools suggest that advertisers can reach fewer people in the United States and Indonesia today compared to this time three months ago, suggesting that advertising audiences in two of the platform’s biggest markets may actually be shrinking. 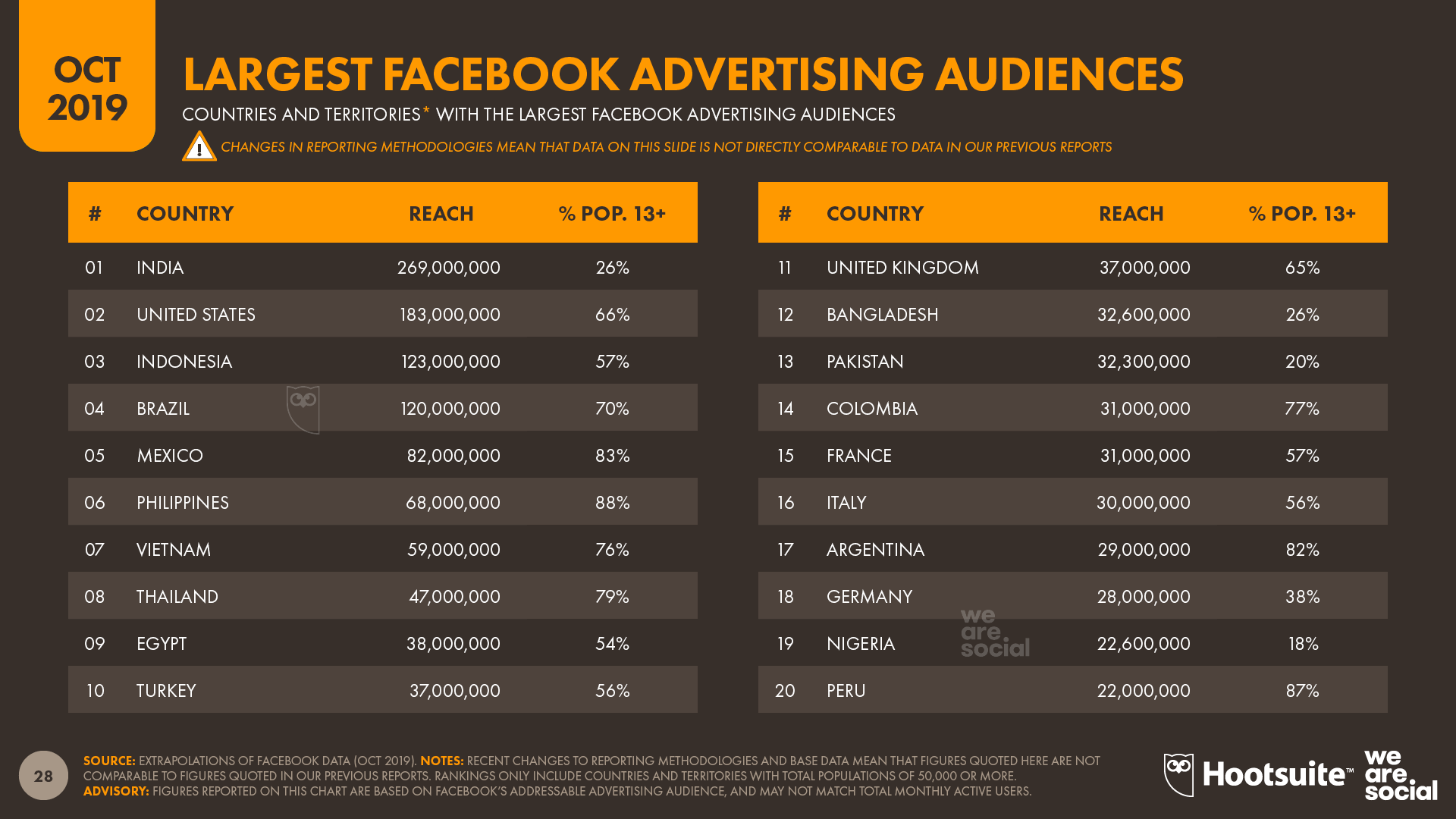 Meanwhile, despite the fact that Facebook still appears to have the largest youth audience of any social media platform in the world, the company’s latest numbers suggest that its youth advertising audience is also shrinking. Facebook’s advertising tools indicate that advertisers can now reach 2.6 per cent fewer users aged 13 to 17 compared to the second quarter of 2019, and 2 per cent fewer users aged 18 to 24. 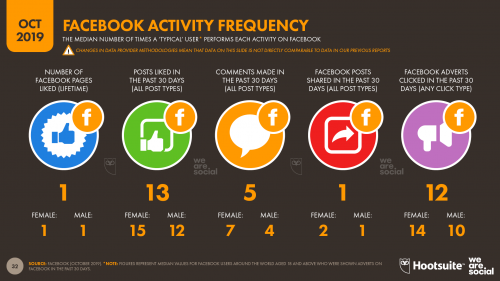 TikTok don’t stop
Bytedance hasn’t published active user numbers for TikTok in recent months, focusing instead on sharing its latest app download numbers, or the combined number of active users across all of the apps in the company’s broader portfolio. The company’s new self-service advertising tools don’t show audience numbers either, opting instead to report audience reach on a five-point scale. 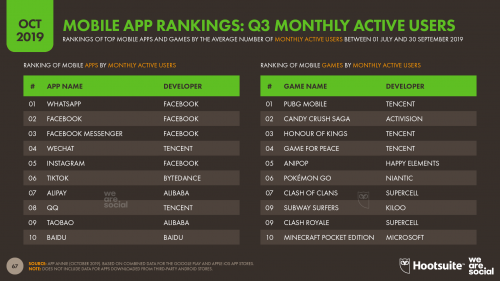 Pinterest
Pinterest’s first investor earnings report revealed that the platform now has 300 million monthly active users around the world, representing annual growth of 30 per cent versus Q2 2018. Data from the company’s self-service advertising tools also show solid growth in advertising reach over the past three months, and marketers can now use Pinterest to target more than 150 million users across the globe. 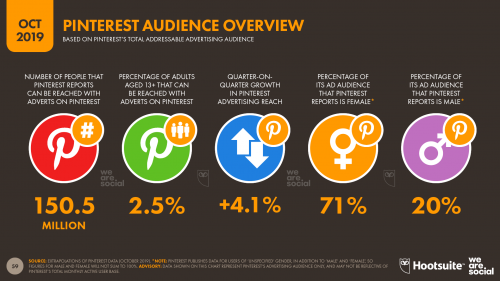 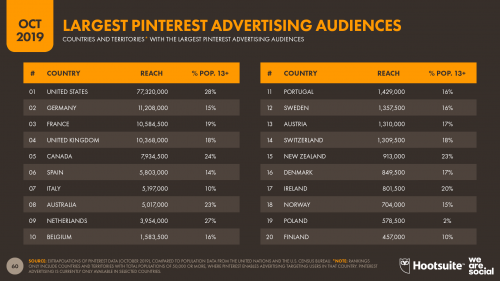 5G making its mark
The latest internet connection speed data from Ookla indicate that the promise of 5G hasn’t been exaggerated. Average mobile data speeds in South Korea – which arguably has seen the most extensive 5G rollout so far – have gone into overdrive in the past two quarters, and the numbers tell a compelling story for 5G’s future. 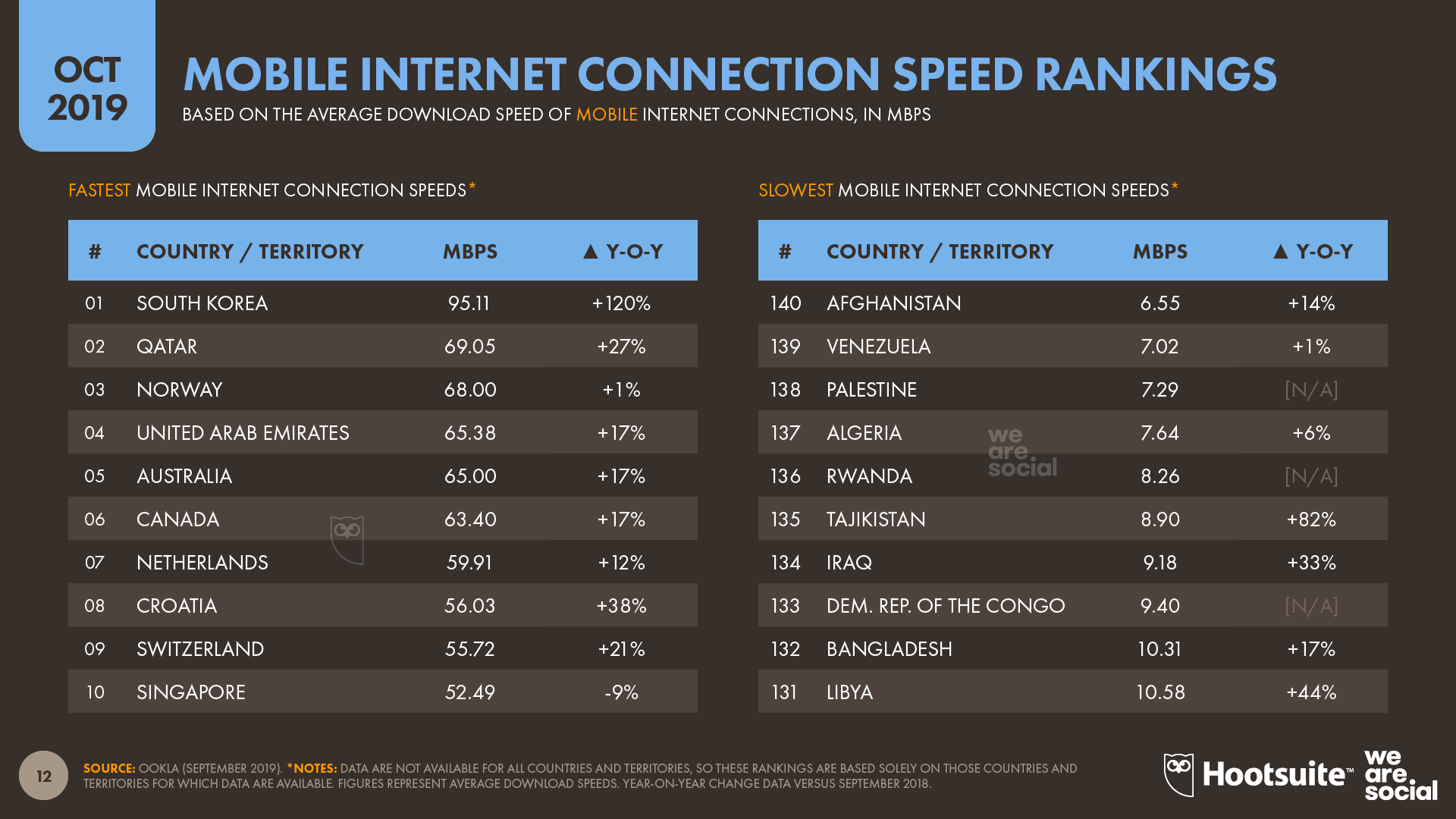 Asia rising
App Annie’s latest data show that six of the world’s ten most-used mobile apps are now owned by Chinese companies (side note: the remainder are all owned by Facebook). Chinese companies also dominate when it comes to mobile games, which App Annie reports account for 40 per cent of all global app downloads. 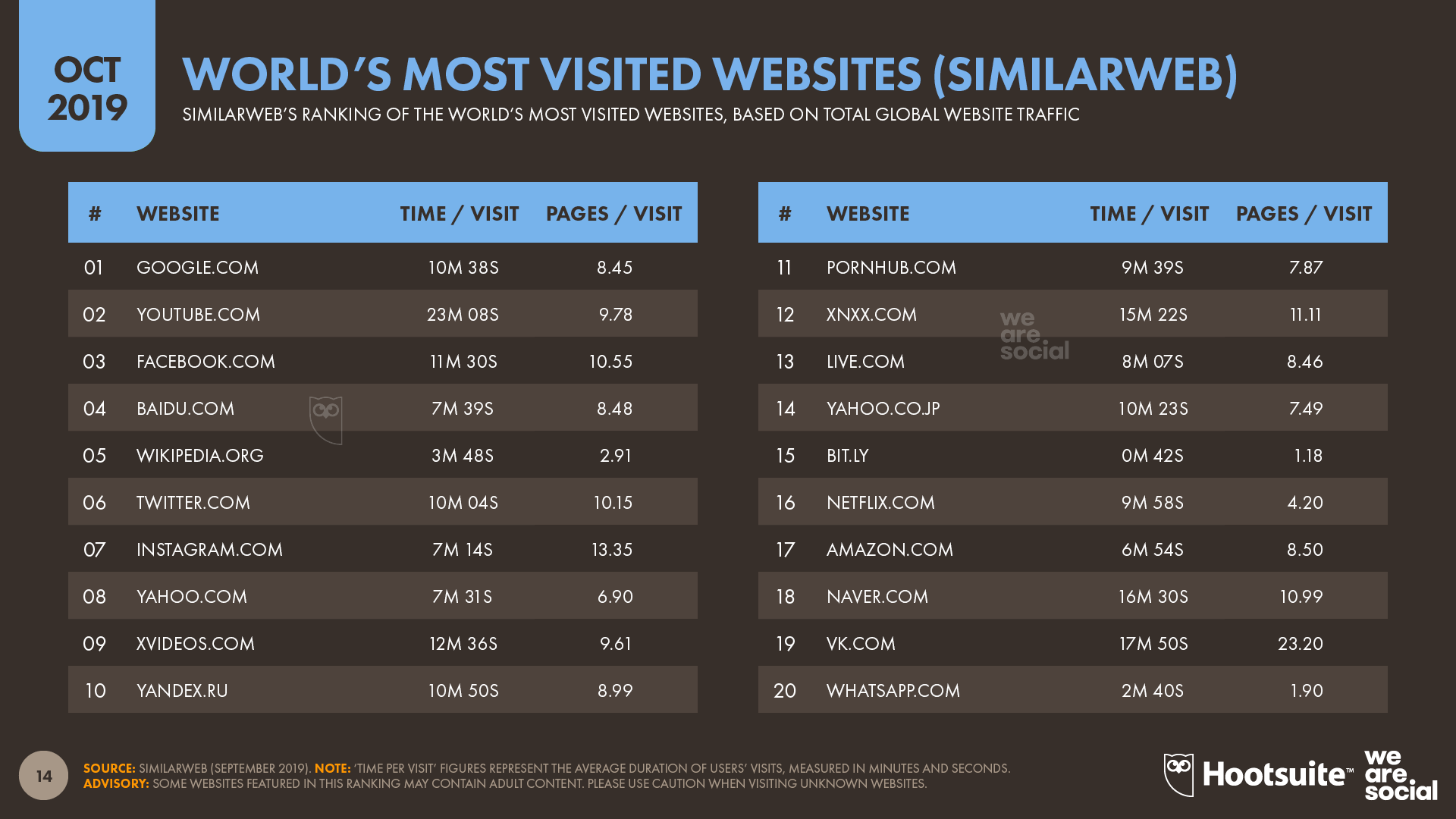 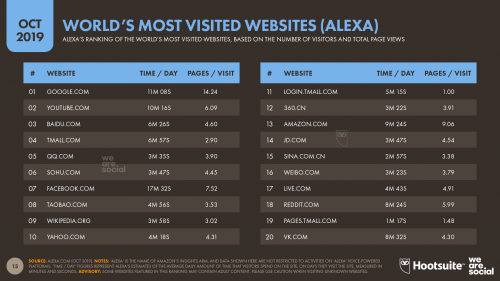 So, if you’d like to dig a bit deeper into ecommerce behaviours and trends in Asia, check out our recent deep-dive reports on online shopping across Southeast Asia.

Looking ahead to 2020
We’re already preparing for our flagship Digital 2020 reports, which we’ll be publishing in the first few weeks of the new year.

That’s all for this time – I’ll see you again in the next decade!