Mobile & Social: The Future of e-Commerce

The team at GlobalWebIndex are great partners to We Are Social, helping us with our day-to-day activities with clients, and providing huge amounts of rich, insightful data for our Digital, Social and Mobile reports. In this guest post, GWI's Felim McGrath shares his perspective on one of the most important developments he and his team are tracking at the moment, and what it means for marketers.

WeAreSocial’s comprehensive Digital in 2016 report shows us just how quickly the digital landscape is evolving and changing, as millions of new internet users come online each year and consumers continue to embrace the potential of the internet. Along with GlobalWebIndex’s detailed 34-market research on digital consumer behaviours, this report highlights how mobiles and social media will be the key drivers of the future of online commerce.

A glance at Digital in 2016 confirms that mobile is fast becoming the ‘primary’ device for many online adults. Smartphone penetration is reaching new heights around the globe, and we are fast approaching the point where being an internet user means being a smartphone user. And with GWI’s data showing that 2015 was the year when 4G overtook 3G as the most common mobile internet connection among the world’s online population, smartphones can now boast the functionality to seriously challenge all other devices.

This evolution is having a clear impact on the habits of today’s digital consumers. Each year, mobiles are capturing more and more of our daily internet time. In a country like Saudi Arabia, for example, internet users now spend almost as much time online via their phones as their computers, and in China, Indonesia and Brazil the figures not far from equal.  It’s in emerging markets like these where low internet penetration rates mean there is the most potential for major growth in internet populations - a growth that will come on mobile. 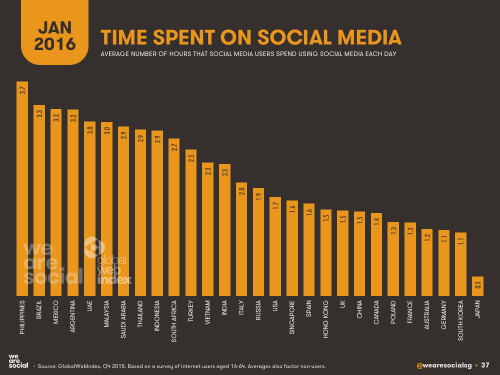 All this means that mobiles have the potential to become essential online commerce devices. Already, some Asian markets are showing the impact that mobiles can have on the online shopping behaviours. Last month, close to half of South Koreans used their mobile to shop online. And in China, mobile commerce has become the norm, with consumers now almost as likely to complete a purchase online via their mobile as via a laptop/PC.

As yet, digital consumers in Europe and North America may be more attached to their laptops and PCs for online shopping, but the trend here is clear. In the UK, for example, where more than three-quarters are online shoppers, it may be only 1 in 4 who are buying via mobile now but with smartphones capturing an average of nearly 2 hours of online time per day, it’s only a matter of time before these consumers become mobile shoppers.

WeAreSocial’s report, and GlobalWebIndex’s data, also highlights another key opportunity in the world of online commerce – social. As Digital in 2016 reports, nearly 1 in 3 of the entire world’s population are using social media, a rise of 10% from this time last year. These figures put paid to talk of the ‘social media bubble bursting’. In fact, social media users are now spending more time than ever using social networks each day. In the most enthusiastic markets, like the Philippines, Brazil and Mexico, users are devoting over 3 hours daily to social media, while in most European markets we are seeing daily figures of 1-2 hours. 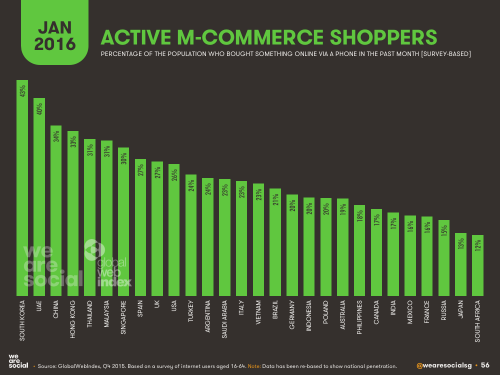 With such a significant amount of online time devoted to social media, there’s clear potential not only for advertising and marketing via social networks, but also for directly monetising users via ‘social commerce’. The last year has seen some of the world’s biggest social networks, like Facebook, Twitter, YouTube, Instagram and Pinterest, testing or introducing integrated commerce options, acting as the middle-men between buyers and brands. The networks themselves have a clear interest in pushing this trend, both to increase engagement with their platforms and to open up healthy new revenue streams.

GWI’s research clearly shows that digital consumers are comfortable using social networks to find new brands and research products they are interested in buying. It’s only a short (but important) step to convincing these consumers to complete their purchase on the network itself.

Again, Asia shows the way forward here. Messaging apps like Line and WeChat have pushed beyond simple chat apps to integrate a broad range of commerce options and opportunities for monetization, forming the clear inspiration for Facebook’s recent development of Messenger Platform. All these developments mean that social commerce has a bright future.