Messaging Apps and Their Future Potential

The growth of messaging apps has been huge over the last few years, changing the way people communicate with one another. In this guest post, Felim McGrath, Senior Trends Analyst at GlobalWebIndex, takes us through the current messaging app marketplace.

Chances are, if you’re reading this then you have a messaging app installed on your smartphone. Facebook Messenger, WhatsApp, Snapchat, WeChat – these apps have helped change the way that digital consumers communicate. Facebook has been the big winner here. The company’s purchase of WhatsApp allowed Zuckerberg & Co. to pursue a dual-pronged growth strategy – while Messenger made the biggest impact in mature markets, WhatsApp has become the messaging app of choice in most emerging markets.

There are some exceptions to this global picture: KakaoTalk is the most popular chat app in South Korea, while Line dominates in Japan, Thailand and Taiwan. And as we will discuss later, WeChat’s popularity in China is almost unparalleled. But with 36% of digital consumers using Messenger and over a third WhatsApping, the control that Facebook has on this booming market should not be forgotten. (Facebook may claim WhatsApp has more users, but the impact of multi-device WhatsAppers with multiple accounts is clearly skewing the figures here). 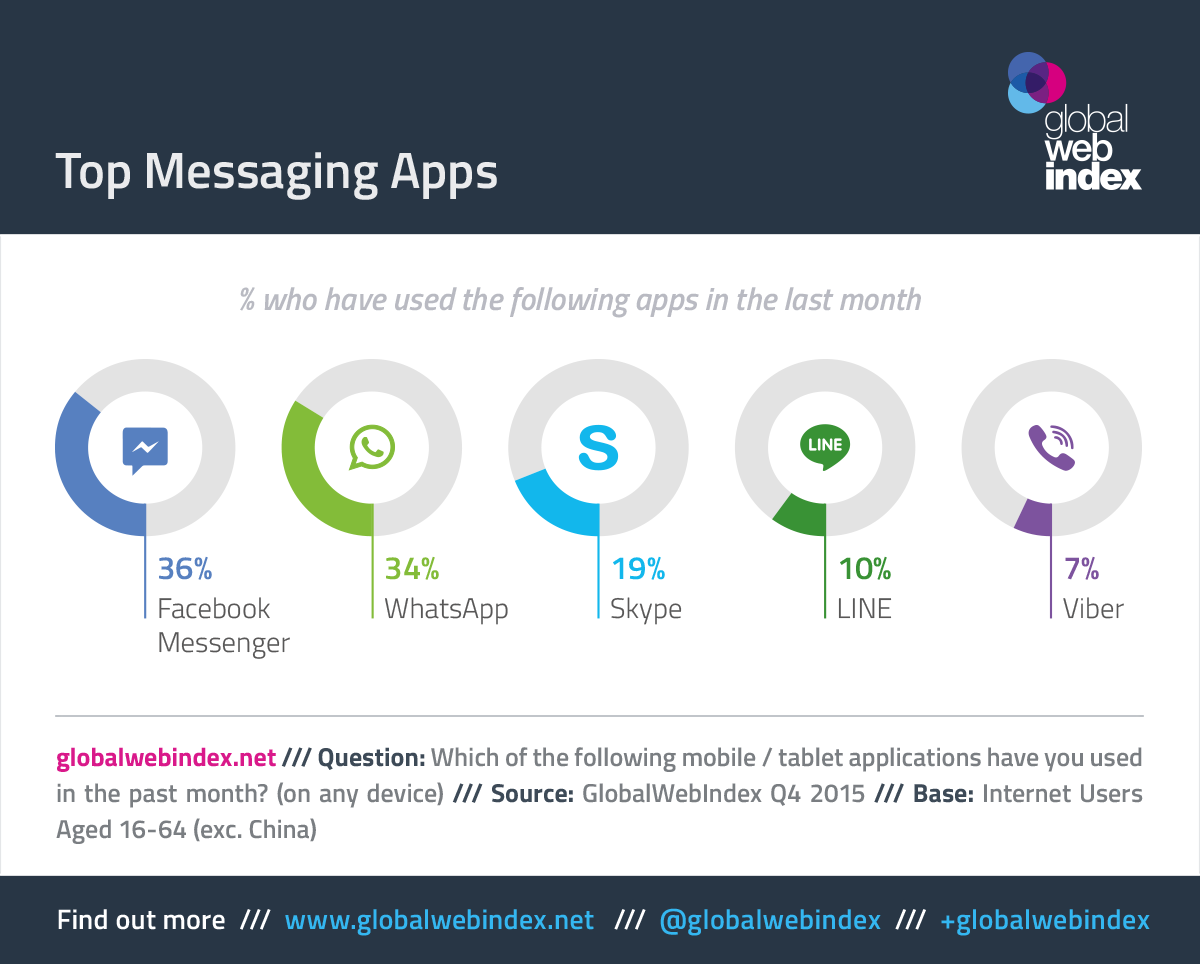 One app that barely registers on a global level, however, is Snapchat – only 7% of global internet users are Snapchatting. But the reason this app causes so much discussion is its success in certain mature markets and, crucially, among certain key demographics. Look at teens in the UK/USA - over 40% are using Snapchat.

But this direct comparison of messaging apps ignores the diversification that is happening with the industry. One way to see this clearly is to compare GlobalWebIndex’s data on specific activities undertaken on these platforms. So, for example, in the last month about half of Snapchat users say they have sent a photo via the app but among WhatsAppers this figure is nearer three quarters.

This might seem surprising, considering Snapchat was an app founded for photo-sharing. But the reality is that these two apps are engaged with in different ways. WhatsApp has stayed close to its roots as a streamlined communication platform, while Snapchat continues to broaden its features to resemble a fully-fledged social network, adding live feeds and content as well as pushing video functionality. As a result, Snapchatters can now do so much more than just share photos. In contrast, WhatsApp’s one-to-one or group messaging functionality means that chatting and photo sharing remain at its very core. 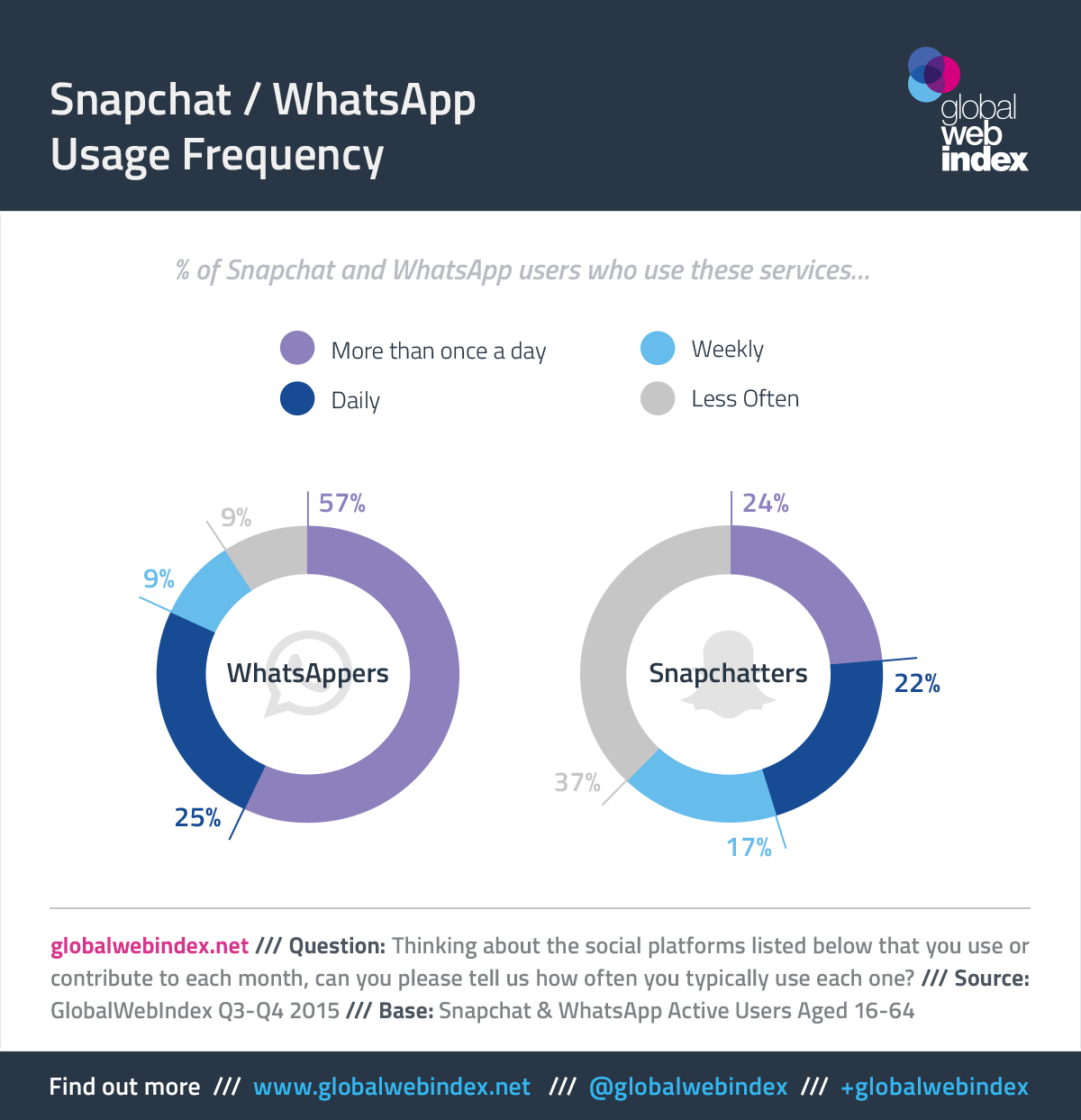 This contrast can also be seen when we look at usage frequency across these apps. WhatsAppers are in fact much more likely than Snapchatters to be daily users (over three quarters are, vs. less than half of Snapchatters). For most users, WhatsApp has become an SMS substitute and as such a daily essential, while Snapchat has become a social network that some engage with obsessively but many are browsing passively or checking infrequently.

These differences mean that, as in the social networking space, a range of platforms will be able to thrive and grow alongside each other in the messaging app marketplace. And for an indication of just what impact apps like these can have on the digital landscape, we only need to look to China and the phenomenal success of WeChat. Two thirds of digital consumers in China are using WeChat, taking advantage of its broad functionality that facilitates everything from online shopping and VoIP calling, to restaurants reservations, taxi-hailing or doctor’s appointments.

Other messaging apps are taking note of these developments. In particular, the launch of Facebook's Messenger Platform displayed the platform's plans to expand its functionality beyond simple peer-to-peer communication and take advantage of the healthy revenue streams that can be opened by facilitating services. Its recent integration of Uber, with Messenger users able to call a car via the platform, is just the first of what will no doubt be a broad range of partnerships. The race is on to make the ‘WeChat of the West’ and, like it or not, Facebook is in the lead...