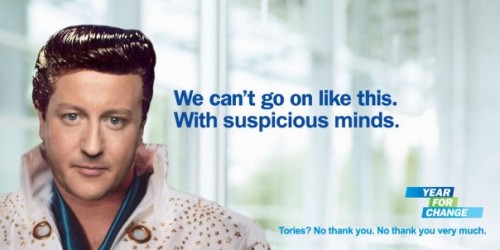 With the buzz about the remixed Conservative Party election posters and Clifford Singer’s MyDavidCameron website a few days old I thought I’d reflect on the debate and offer up some analysis about what might be going on here and what it means for political parties ahead of the election.

But before I can do that I need to jump back to September last year when I discussed Manuel Castell’s theory of networked power and suggested how it could be applied to the UK’s political blogosphere.

In a nutshell, Castells argues that power in networks is fundamentally about the ability to establish and control particular networks.

This can be achieved by one of two ways:

Castells calls actors in the first mechanism ‘programmers’ and those in the second mechanism, ‘switchers’.

I argued that Conservative and right-wing blogs were successful because they had programmed the UK’s political network by a) adapting early and b) creating a broad anti-government debate which resonated with the media and wider public.

This meant that left and liberal bloggers had to find common issues and threads with each other and the public with which to try and switch the dominant power in the network away from anti-government/right-wing debate.

So what does this tell us about the MyDavidCameron success? Firstly, I think it supports my original hypothesis. That is, Labour have identified a wider – albeit smaller - network outside of the UK political blogosphere with a shared value (mocking David Cameron/the Conservatives and graphic design).

They are then co-opting this network, forming a strategic partnership but letting the idea and content go where it goes, as opposed to trying to centrally plan and control what happens with the David Cameron imagery.

In my opinion, a political party having the foresight and ability to spot an opportunity like this and use it to help try to ‘switch’ the dominant discourse in the political blogosphere is smart.

Yes, there may be those that say: “well, who wouldn’t jump on an opportunity if it arose?” But I’d argue that the traditional approach to this kind of online meme would be to try and own it: take it in-house.*

I think Labour have deliberately avoided doing this, having learnt the lesson from last summer’s #Welovethenhs grassroot campaign that which Labour co-opted, arguably tried to centralise and quickly destroyed the value in the network. Compare how they're currently using a Labour Party version of MyDavidCameron (i.e. becoming another node in the network) versus their mini-campaign site for #Welovethenhs which argubly tries to own the decentralised campaign network.

But thinking logically about the MyDavidCameron campaign: would Labour seeking to ‘own’ the network really kill it in the same way that it killed #Welovethenhs?

I’m not so sure for two reasons:

What this says to me is that now we’re entering the run up to an election, the political discourse is no longer split broadly between anti-government/right-wing ideology and pro-Government goals (that were largely indistinguishable form Labour policy).

Instead, Labour is starting to reprogram the UK’s political networks through creating a discourse of Conservatives vs Labour. It’s early days and the Conservatives still have the upper hand but I’d argue that the MyDavidCameron campaign plus the recent emergence of distinct left and Labour-aligned voices is starting to re-balance the pro-right-wing goals of the UK’s political networks.

Footnote:
* What this reveals is Labour’s ability to switch between a traditional command and control political party and a node in a fluid, participative network. Something Andrew Chadwick has defined as “organisational hybridity” – the internet driven phenomena that enables organisations and institutions to switch between being member-led hierarchical institutions, single-issue campaign groups or temporary, loosely joined networks of like-minded individuals. I believe this is what political parties of the future will look like: political parties in all but name, But that’s something for another post.

The Conservatives' nudge to marketers

In a comment piece in last Friday’s Guardian, We can make you behave, Shadow Chancellor George Osborne...