We Are Social’s Monday Mashup #60

CMOs say Facebook delivers highest ROI
A survey of 175 CMOs from the CMO Club found that 74% of respondents are confident that 2011 will be the year that the industry cracks the issue of measuring solid ROI on social media investment. When asked which platforms yield the highest return, Facebook topped the leader board, with ‘Ratings and reviews’ coming in a close second.

The findings of the report show that marketers will increasingly seek to measure and quantify their social media efforts in 2011, so it’s reasonable to expect marketers to focus on the social media activities that deliver the greatest return.

Email on the wane
A comScore report has shown widespread decline in email usage from all people under 54: there was a 12% drop in usage from 45-54 year olds and, incredibly, a 59% decrease in 12-17 year olds. 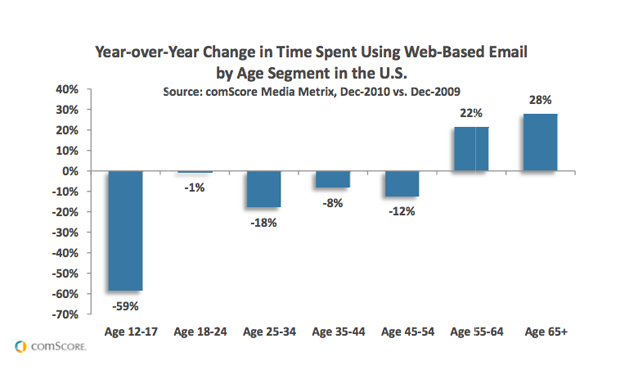 High school kids don’t use email, they use SMS a lot. People want lighter weight things like SMS and IM to message each other.

Alarm bells will surely be ringing for email service providers right about now, and they'll have to react to these findings in the coming year.

Virgin America prioritise social media
And while we're on the subject, Porter Gale, VP of marketing at Virgin America, was featured in Advertising Age last week delivering an interview on the virtues of social media as opposed to traditional media. When asked what other airliners could learn from Virgin America’s success with social media, Porter said: “that the conversation is happening whether you are participating or not. Having a two-way dialogue is really important as people are online more and more.”

Netherlands lead global Twitter reach rankings
As of December 2010, the Netherlands topped the global Twitter usage rankings, with 22.3% of the population using Twitter, followed by Brazil at 21.8% and Venezuela at 21.1%. 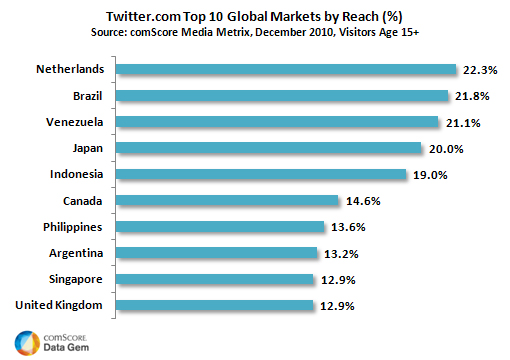 The United Kingdom managed a respectable 10th place, with the United States not featuring in the top 10 at all. Chin up Bieber.

Researchers pinpoint hashtag sweet spot
Researchers from Cornell’s computer science department and other universities have published a study that suggests the hashtag ‘sweet spot’ – the number of times we have to see one before it sinks in and we are likely to use it – is between 3-6 times.

A similar study, published by Stanford University, found that over time bloggers had more influence in certain areas than the mainstream press. Findings of this nature are in keeping with the comScore research mentioned earlier, that suggested marketers are increasingly moving away from intuitive processes, towards more quantitative means of assessing and implementing social media strategies.

Football related Twitter activity on the rise
Meanwhile, a Barclay’s study reported that there were almost a million mentions of the Premier league on Twitter in January, with Liverpool – owing to their transfer activity – topping the leader board, and Arsenal and Chelsea coming second and third respectively. That's the only league Liverpool will be topping this year though... 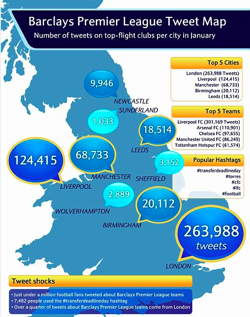 Facebook pages get a facelift
Last week Facebook launched a redesign of Facebook pages which has major implications for brands. Alongside the new Page layout, they have added filters that select who can and can’t comment, users can now browse Facebook under the guise of the Page they are an admin of, and lastly, Tabs can now use Iframes. Importantly, they have also added a keyword moderation feature for Page admins, a feature that admins of brand pages everywhere will welcome.

A sneak preview of the 'Facebook phone'
Last week, INQ Mobile dropped into the TechCrunch offices with a pre-production  model of the ‘Facebook phone’ – a device “optimised for social experiences”. Called the Cloud Touch, it also comes equipped with a mobile Spotify service and various Facebook friendly functions – such as bundling all of the contact details of your Facebook friends into a unified contacts list based on both user inputted data and information lifted from Facebook.

Twitter will turn down future API ‘whitelist’ requests
Twitter has told developers that it won’t grant any more ‘whitelist’ requests for use of its API. Essentially, this means that any new companies wanting to develop Twitter apps will no longer be able to access Twitter’s API to source their data. Twitter’s reasons for doing so are unclear as of yet, though Business Insider have ventured a few possible explanations.

H&M  launch their first Facebook Places and Foursquare campaign
Until the 21st of February, customers that check in to an H&M store on Facebook Places or Foursquare will get $10 off any pair of jeans priced at $39.95 or higher. Following in the footsteps of other fashion brands such as Diesel and Jimmy Choo, H&M is the latest brand to have rolled out a location-based campaign and is unlikely to be the last.

French Connection open Facebook store
French Connection have entered the social commerce arena, giving their fans the ability to buy items direct from their Facebook page. Alongside brands like ASOS and Young British Designers, French Connection is now making its wares available direct to Facebook’s 30 million UK user base. New Media Age goes on to list a number of brands that have made a success of driving sales using social media, citing our work with Clothing at Tesco's Facebook presence, which generated over £2 million sales in the past year.

Porsche thank Facebook fans – a 1,000,000 times
Porsche reached 1,000,000 fans on Facebook faster than any other automotive company. To say thanks to everyone that made that milestone a reality, last week they released a video of a team of Porsche engineers sticking the names of all 1 million Facebook Fans onto the body of a Porsche 911 GT3: a nice example of a brand reaching out and rewarding its fans. Just make sure not to poke Porsche - it could work out pretty expensive...

Orange launch Valentine’s campaign: “Isn’t it Tweet”
Orange have asked Twitter users to come forward and share their love stories, with the promise of having the best turned into short animations by Tom Judd and Ed Barrett.

Radio 1 DJs go head to head in live ‘Twitter race’
Scott Mills took on Team MistaJam in a Tweet-powered scaletrix race last week. Listeners were invited to tweet #BBCR1Race to either scott_mills or mistajam, each tweet powering the car around the scaled down track.

Mistajam ended up pipping Scott Mills to the post in what I’m sure you can imagine was an intense racing spectacle.

UK courts rules that tweets aren’t private
Last week, the Press Complaints Commision ruled that articles in which a member of the public’s tweets were quoted were not intrusive. Sarah Baskerville, a senior civil servant who became the target of widespread scrutiny following the publication of a number of her tweets in both the Daily Mail and the Independent, felt that publishing her tweets had been an intrusion of her privacy. The PCC, however, ended up siding with the press, saying that if she had wanted those tweets to remain private, she should have 'protected' her tweets.