We Are Social's Monday Mashup #75

Social media accounts for one out of every six minutes spent online
According to comScore data, social media now accounts for nearly 16% of time spent online, with Facebook responsible for an awful lot of this traffic - it reached an all-time high in May, of 157 million users in America. 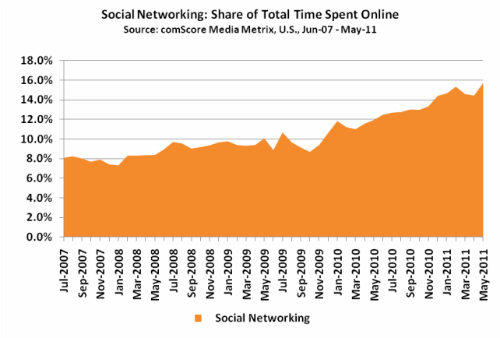 Bumper month for YouTube and Twitter traffic
Hitwise stats for May reveal the impressive growth of Twitter and YouTube within UK social networking sites and forums. YouTube now accounts for one in every five visits to all social networking sites and Twitter had its biggest month ever, thanks in part to the attention it received as a result of super-injunction revelations and also to a smattering of large global news events such as the death of Osama Bin Laden. The by-product of this is that despite its continuing growth, Facebook's market share has been eroded, and now (only) stands for 54% of traffic to social networks in the UK. 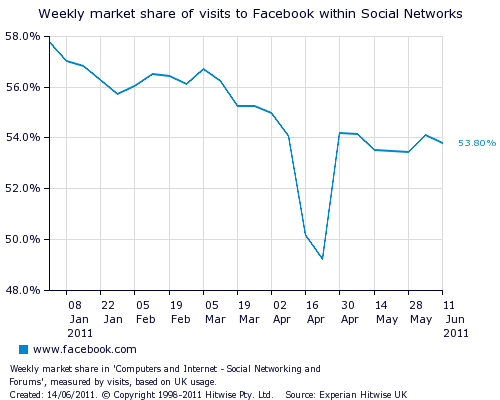 Facebook users have more friends and close relationships
A new report from Pew explores the effect that using social media – in particular Facebook – has on our personal relationships. The research found that the average internet user is more than twice as likely as others to feel that people can be trusted, with Facebook users being even more trusting. The study also found that those who use Facebook regularly are on average 9 percent closer to their overall social network compared with other internet users.

There's loads more in the report which is worth checking out.

Over-55s begin to ‘like’ brands
Older Facebook users are increasingly engaging with brands on the site, with nearly half having ‘liked’ a brand on the site in April 2011 compared to just one in four in September 2010.

Twitter users want more responsiveness from brands
An interesting factoid: although the majority of Twitter users pose questions at all of their followers rather than directing questions at specific brands or users, the research found that about six in 10 users worldwide wanted brands (as appropriate) to respond to such Tweets with answers to their questions.

Facebook set to become No.1 display ad-selling company in US
eMarketer estimates that Facebook will grow its net display revenues this year by another 80.9% to $2.19 billion, which will push it past Yahoo! to become the biggest vendor.

Facebook page tab character limit extended
Facebook has made it easier for brands to use descriptive page tab names by extending the character limit from 16 to 100 characters. Admins can now provide more information about the content of a tab within its name, for example giving details of a competition prize in order to drive more people to visit the tab.

Facebook’s music plans revealed
Facebook is in discussions with Spotify and other music platforms as it gets serious about music. Planned services and features include a new ‘music’ tab alongside the Photos, Friends, Places and Groups tabs, a music dashboard showing what friends are listening to and recommending and a playback/pause button, which lets users listen to music while visiting the site.

Facebook’s new, improved and Instagram’d photo sharing app
A new Facebook photo sharing iPhone app is set to be released, offering users Instagram style filters when sharing pictures to the site. Instagram is the latest company that Facebook have ‘borrowed’ features from, following the launch of Facebook places in the wake of Foursquare’s early success.

A picture of success: Instagram hits 5 million users
Meanwhile, Instagram reached 5 million users last week, with an astonishing nearly 100 million pictures having been added to the site in its five-month existence.

Skype gets more social
Skype has launched its new 5.5 Beta version for Windows, which features deeper Facebook integration, meaning that users can now instant message Facebook friends directly from Skype. It also includes a Facebook contacts tab and allows users to ‘like’ and comment on a friend’s Facebook status within Skype.

Tumblr accrues more blogs than WordPress – in half the time
Four-year-old Tumblr now hosts nearly 21 million blogs – 85,000 more than eight-year-old WordPress – according to data released by both websites.

M&S sets up shop on Facebook for Fathers Day
With retailers increasingly beginning to dabble with selling direct to Facebook users via F-commerce, British retail institution Marks & Spencer created a pop-up shop on the site for Fathers Day. Visitors couldn’t actually make purchases within the store though – they were redirected to the main M&S website to do so – which meant that ‘shop’ was actually more of a promotional catalogue than a genuine F-commerce experience.

Europcar broadcasts Tweets on outdoor media
Car hire company Europcar has launched a new campaign to promote its freeDeliver service, which is geared to “save an hour in your day”. The company is asking Twitter users to describe what they would do with this extra time using the hashtag #myextrahour, with the resulting stream being broadcast on outdoor media sites across London. A nice example of the two-way relationship between social and traditional media that brand owners are now able to take advantage of.

President Obama takes to Twitter
For the first time, Barack Obama is to begin Tweeting personally from his 8.7 million follower strong Twitter account. Obama will be tweeting himself during his 2012 presidential bid as part of a series of changes to his Facebook page and Twitter activity - with all tweets from the man himself signed 'BO'. British military educated about social media risks
The Ministry of Defence has produced a YouTube video campaign designed to educate military personnel and their families about the potential pitfalls of using social networking sites, namely around the disclosure of information that could put themselves or others at risk. This one could bomb.

Top PR companies are best at doing their own PR
New research shows that broadly speaking, the top PR consultancies in the UK (specifically the top 25 of those featured in PR Week’s Top 150 PR Consultancies) secure more media coverage than other agencies. And, whooda thunk it, when looking at agencies' social media presences, they found We Are Social leading the pack.