We Are Social’s Tuesday Tweakup #9

Yesterday's bank holiday isn’t going to spoil our love of alliteration, so although slightly delayed here's our first mashup of 2012. And if you missed last week's news due to the festive celebrations (aka inebriation), you can have a read of it here.

It’s all about measurement
2011 saw a rise in understanding and awareness among marketers of the importance and use of social media, but it seems that marketers still need help with measurement - according to a survey by Lenskold Group, only 19% feel they're 'good' at measuring the ROI of their activities: 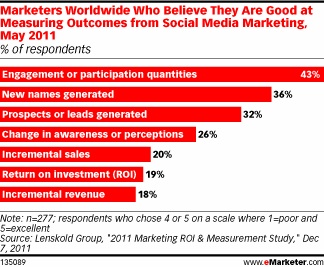 Facebook Messenger for Windows
Facebook are trialling a desktop chat client for Windows with a limited number of people. It’s similar to the mobile app, but in addition includes notifications and the news Ticker, which will drive users back to the main Facebook site. Like its website counterpart, Ticker in the Windows app features Sponsored Stories, though how clickthrough rates will differ between the two platforms has yet to be seen.

Twitter out of action on New Year’s Eve
An overload of activity on New Year’s Eve left Twitter floundering. In the UK, the social network crashed at around 3pm and was out of activity for over an hour, as in Japan the midnight celebrations saw users sending a record 16,197 tweets per second. The site continued to struggle over the course of the night, most probably due to the arrival of 2012 in different parts of the world, leaving many Twitter users frustrated. As one witty Tweeter commented, “Twitter’s New Year resolution needs to be I will never go over capacity”.

Google+ traffic on the rise
After a period of significant decline that followed their initial growth spurt, Chitika Insights have revealed that traffic and user count for Google+ is on the rise. From September to October there was a 55% increase in overall activity, followed by a 41% increase from October to November. This 118% increase in activity from September to November could be due Google’s successful integration of its social network across its services and the company’s heavy TV and online advertising of the network.

“I still think it's monumental. The FDA finally addressed the digital channel in a specific way by mentioning Twitter and YouTube in the document, and those have never been mentioned before.”

EpicMix RFID’s social skiing
It might be a bit difficult to use with ski gloves on, but Vail Resorts have released an update of their EpicMix social platform for skiers this 2011/12 season. It’s an improvement on last year’s platform, with updates including a re-design and instantaneous upload of photos taken by resort pro photographers onto skiers’ EpicMix accounts. Users are encouraged to share their photos via social networking sites, and though the photos are free, users have to pay to download high res versions. The platform uses the RFID chip in each lift ticket to track users across the entire mountain, and combined with an iOS/Android app and website offers rewards, badges, live friend connectivity and a full range of stats.

What's great about this is that by sharing photos of themselves having a great time at Vail on social sites, users are subtly encouraging their friends to book holidays at the resort. Furthermore, the pro photography integration with the platform means that skiers are free to enjoy their holiday without having to carry a camera around and sharing photographs is far easier than before. Now that’s cool.

HP can make your New Year dreams a reality
Well, not exactly. But with the HP TwitterWisher webapp, by submitting wishes accompanied by the hashtag #everybody2012, users were able to have their wishes printed on a balloon that was released into the sky. The balloons were released from HP’s Middle East headquarters in Dubai, and when someone found one they could log on to the site and enter the ID of the balloon to let HP know they found a wish.

Ikea to reward Facebook fans and their friends
On January 14, Ikea is hosting a special day for its Facebook fans – Bring Your Own Friends Day. Facebook fans can invite their friends to the Facebook page and even establish Shopping Teams to enjoy perks and giveaways, including complimentary chair massages and free breakfasts in-store. Furthermore, for each friend invited, Ikea will donate $1 to the charity Save the Children.

Citibank’s Facebook app lets customers pool their reward points
Citibank are allowing their customers to pool their reward points through Facebook. The app asks users to say who the ‘rewards pool’ is for and why, and the person that you name will then have all control over the points in the pool. Pools can be promoted, so there’s great potential here to use the app for charitable fundraising, especially combined with Facebook’s new feature, ‘suggested events’.

Twitter under fire to block terrorist groups
Israeli law centre Shurat HaDin is threatening to sue Twitter unless it cuts off access to groups such as Hezbollah, which are considered terrorist organisations by the US. Although Twitter has long made a point of saying it does not take political sides, and favours free speech, it will no doubt be looking into Shurat HaDin’s threat very carefully.

Rupert Murdoch joins Twitter
In just three days since signing up, Rupert Murdoch’s Twitter account has gained over 92,000 followers. The account has been verified and News Corporation has confirmed that it is Murdoch himself tweeting, rather than a managed account. However, his wife’s supposed account, which has attracted more than 9,800 followers, has been revealed as a fake. Murdoch's tweets have already ruffled a few feathers, and it seems not everyone is welcoming of the News Corporation Chairman and CEO's arrival on Twitter: