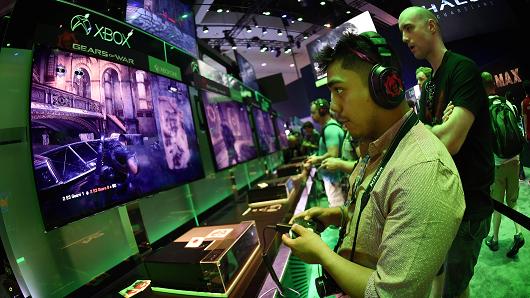 The future of social gaming

Every summer, gamers, gaming studios and gaming media travel en masse to Los Angeles to attend E3: the Electronic Entertainment Expo. E3 is one of the world’s biggest gaming conferences and showcases the games everyone will be talking about in the future.

Gaming is big business, and is predicted to generate $99.6 billion dollars in 2016 alone. Across the world, there are global gaming championships for just about every type of game in existence with new(ish) social channels that allow users, fans and gamers to watch (or upload and stream) people as they play. The biggest of these channels are Twitch TV, Hitbox and Gaming on Youtube.

Times are a changing...
The industry is finally catching up with developments in VR and social media, which are set to transform the world of gaming as we know it. We are already seeing large social networks fighting for gamers to stream through their platforms. Facebook recently partnered with Blizzard to allow social sign in for a number of their games, making it easy for gamers to stream their sessions through Facebook directly to their own timelines.

As head of creative technology for We Are Social and an avid gamer, here are my top picks from the E3 Expo and the ones I think you’ll be playing in the next couple of years.

Steep
A beautiful game, a beautiful idea. Allowing multiple users to experience extreme sports across two of the world's most famous mountain ranges with friends and other users.

Open world games always offer users a freedom of choice. Pair this with the fact that you can record and share your progress and stunts on social networks and we truly have a social game that integrates social platforms without ruining game play.

Ride a massive open world of the Alps and Alaska, where the powder is always fresh and the run never ends. Defy and master the world’s most epic mountains on skis, wingsuit, snowboard, and in paraglide. Go solo or drop in side by side with other players. Record and share the most insane stunts ever captured, then challenge the world to beat your best tricks, ride your custom lines, and relive your most epic wipeouts.
Blizzard Press Centre

Lego Worlds - Multiplayer
Lego Worlds, technically, is already in release, but Lego has now announced it is planning a multiplayer option. For a much loved brand the world over it’s great to see and experience building wacky things together, and is something I look forward to doing with my own kid in the future.

Star Trek Bridge Crew
Whether you’re a fan of Star Trek or not, this is one of the best social experiences for gaming as well as virtual reality. Bridge Crew allows you to take control of a Starship and go on missions either by yourself, or, as the video depicts, with friends.

Developed specifically for VR, Star Trek: Bridge Crew puts you and your friends in the heart of a starship, where - as officers of the Federation - every action and decision you make together will determine the fate of your ship and crew.
Star Trek Bridge Crew

Virtual Reality
As I suggested in my post about Social and VR, the ability to enjoy social experiences in VR will be the catalyst that pushes the technology into everyone’s home and drives it mainstream. Having the opportunity to communicate and play games with friends, wherever they are in the world, is the killer experience and now we are seeing the industry gearing up for that evolutionary change. Whilst many of the VR games on display are designed for singular use, the software to enable group gaming is now finally catching up, years after the technology was first developed.

What we are also seeing, as expected, is that console gaming offers the cheapest and easiest setup solution for VR with a simpler plug and play experience, in contrast to the laborious setting up and expensive PC gaming route.

Summary
Gaming has always been a great experience, either socially or individually, and now social thinking is driving most modern games. Online gaming is always on the rise. Agencies can learn from how the industry adapts and evolves. Start playing with these VR social and experiences now as we will all be using online immersive worlds in the future.