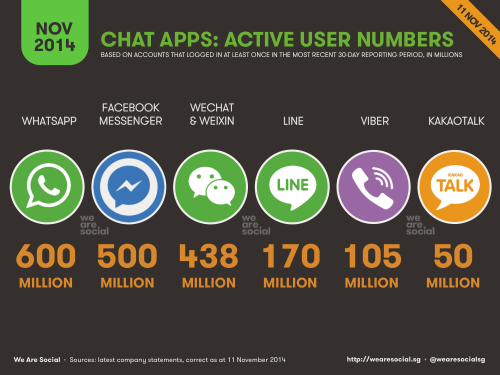 Facebook has announced that monthly active users of its Messenger app have jumped to 500 million, a 150% increase in reported user figures since April this year.

Although Facebook's methods for driving usage of the app have been controversial - mobile users have been forced to download the Messenger app if they want to use Facebook's chat features - it appears that the platform is growing at a rate of almost 1.5 million new users ever day; that's more than 17 every second.

However, Tencent are due to release their quarterly results tomorrow, and we anticipate that they will once again announce strong growth of the company's flagship WeChat messenger.

You can find more of the latest user number figures for many of the world's top social platforms in We Are Social's Digital Statshot 002.