We Are Social Asia Tuesday Tune-Up #204

Bangladesh blocks Skype and Twitter and five other sites
Following the Bangladeshi government's clamp down last month on six social media apps - Facebook (which citizens have now been given access to since December 10), Messenger, Line, WhatsApp, Viber, and Tango - citing “threats to national security” - the authorities have expanded the scope of the ban and blocked Skype and Twitter. The new instructions were sent to all telecom operators via email, with the ban taking effect “immediately and until further notice.” Though Bangladesh has, in the recent past, seen a creeping wave of Islamic fundamentalism percolate through society, citizens remain divided over the ban, with some in outright disagreement.

WeChat banishes Uber
WeChat, China's most popular voice calling and messaging app, recently blocked a substantial number of Uber's official brand accounts. This effectively locks Uber out of an important platform for spreading the word about its car-hailing service. Tencent, the company behind WeChat, says that this move is part of a huge clean-up of WeChat’s brand accounts. The company has handled 116,879 violations on brand accounts since last month, including 67,883 that was related to pornographic material. 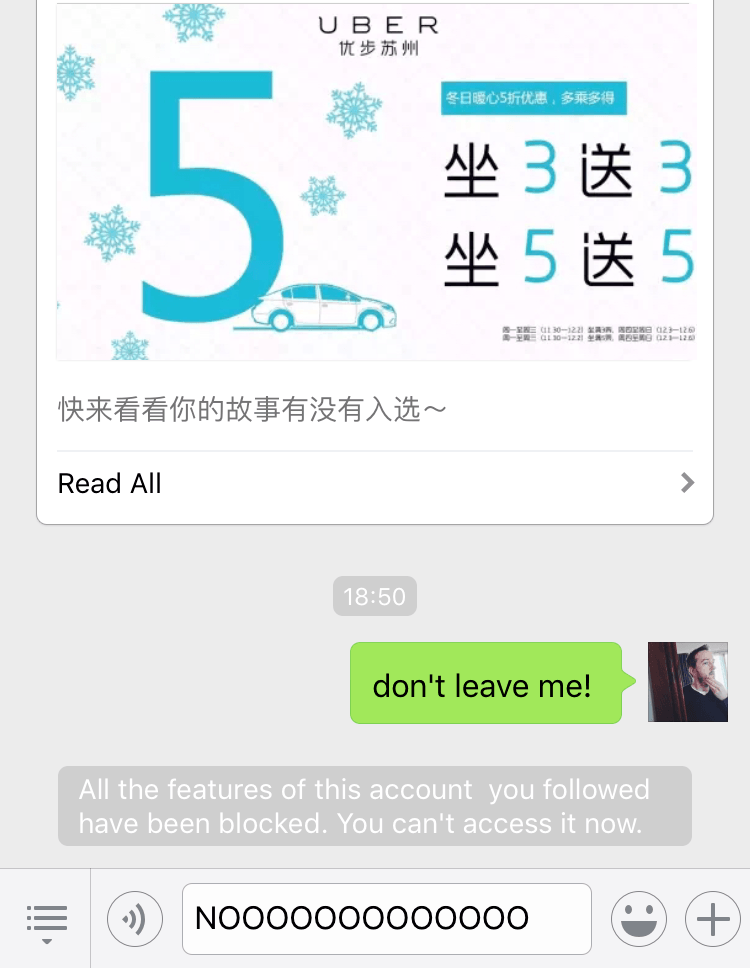 While the WeChat blockade doesn’t affect Uber’s core business (which now covers 20 Chinese cities), it will no doubt hamper the US startup’s social media marketing strategy.

No sleep for brand customer services as Facebook add new tools
Facebook has introduced even more tools to assist marketers with customer service. According to Facebook, messages to pages run by businesses have doubled in the past year. Pages will be able to set their own responsiveness times to manage customer expectations but also set themselves to ‘away’ outside of business hours or when they need a big toilet for instance. Customer service personnel will also be able to leave notes on users’ messages, like: “a-hole alert!” but probably more professional.

Facebook shuts down Creative Labs and all of its apps
While all our heads have been turned by Christmas shopping and eggnog, Facebook has been killing its innovation baby, Creative Labs – an initiative that encouraged its employees to design new mobile software such as Slingshot, Riff and Room. And what are they you ask? Don’t worry about it, they’re gone now anyway!

“This is an experiment. We’re continuing to explore ways to surface the best content for people using Twitter.”

Twitter extends ads to logged-out users
Although 307 million people log in to Twitter monthly to check their updates, 500 million people visit who aren’t logged in. Until now, Twitter hasn’t been able to make any money from these logged-out users, UNTIL NOW. They have now started testing ads on people who aren’t logged in, who mainly come to the site through Google searches, e-mail links or tweets embedded on third-party sites.

Twitter changes image format
Twitter has made an update that means the end of unfortunate image crops when uploading your photo updates. Now photos will be uploaded in the size they were intended and this comes as part of its mission to move away from being a text-based service.

Pinterest acquisitions boost e-commerce and image recognition
Pinterest’s acquisitions rise to nine following an announcement that they’ve bought Pext and The Hunt. The former is a a meme generator, the latter helps users find fashion items by posting an image of it for The Hunt’s community to locate faster than a bunch of Beliebers can find Justin’s latest Instagram crush.

Whisper doubles its audience in six months
Anonymous social platform Whisper has reported that it now has 20 million monthly users, which is twice as many as it had in May. It cannot be denied that the closure of rival app Secret may have something to do with this; where else is one meant to air their filthy Gandalf fantasies? It has also been pulling in some top advertisers with Coca-Cola and Disney/Pixar using the platform.

Sheraton launch tweet campaign to bring a bit of joy to flight delays
A clever competition has launched by Sheraton hotels which hinges on one of the biggest annoyances of flying: delays. Now if you tweet Sheraton with the hashtag #delightdelaysweeps when stuck at an airport, you could win some great prizesincluding a hoverboard. Perhaps you could use that to get you home for Christmas?

Arlo offer ‘Burglars on Demand’ on Twitter for home security advice
Netgear’s home security brand Arlo has launched a new campaign working with ex-burglars who will kindly offer advice via Twitter on home security. The campaign grows out from a five minute video where an actor (playing a burglar) talks a family through what criminals actually consider when targeting a home. They have also used social listening to communicate with Twitter users who have left themselves vulnerable because of the information they’ve shared on social media.

Miss Piggy takes to Facebook messenger
Want a little bit more pork with your pokes? Now you can chat with Miss Piggy herself (or at least, AI pretending to be Miss Piggy) Facebook messenger, lucky you! The AI Miss Piggy is here to promote the new series of The Muppets Show on ABC. Watch this space for other AI chat bot promotions in the future as brands line up to take advantage of the current messenger app boom.

NHS partners with Tinder for organ donor campaign
Now there’s more than one kind of match to be found on Tinder; as well as a potential Friday night frolics, users could be led to someone who one day literally could take their heart. The NHS is working with Jamie Laing from Made In Chelsea and other celebritiesto create profiles which when swiped right tell users: “If only it was that easy for those in need of a life saving organ to find a match.” and then encourage them to sign up to the NHS Organ Donor Register.

WE ARE SOCIAL ASIA TUESDAY TUNE UP #354