Latest report into Twitter user-base in America released
Pew last week released a new report into how Americans are using Twitter - with some interesting findings. The take-away statistic was that 13% of online adults now identify themselves as Twitter users, up from 8% (when they first posed the question) in November. That's a marked increase in just six months.

Sina Weibo to launch in US
Considering how Twitter is strengthening its market penetration, it might surprise some to hear that Chinese micro-blogging service Sina Weibo is rumoured to be launching in the States within the next three months. It's hugely popular in its home country with over 140 million users, but without the name recognition, its hard to see it making quick progress in America, particularly considering how differently it's currently used in China.

Twitter to be integrated at system level in iPhone software
According to rumours - and they are just rumours - Twitter  and Facebook will come 'hard-baked' into the latest release of Apple's iOS for iPhones and iPads. This will mean that after authenticating the account, users can share pictures et al directly to the social networks. But there's more to the story than this: the big question is how much more social Twitter and Facebook will be if they are embedded directly into the device? And the answer is almost certainly a lot more.

Twitter creates photo search, introduces Follow button
Twitter has launched a new version of search - where users can specifically search for photos. When events are happening in real-time, this should prove a really nice touch to illustrate what is going on, on the ground. It will be easier to manage once Twitter's own version of Twitpic/Yfrog is released over the next few weeks.

They've also launched a Follow button which works with just one click. According to some reports, the Follow button will help expand follower bases by up to 15% - in just one week!

LinkedIn to launch job application tool
After its monster IPO, LinkedIn is under pressure to show how it can make money. Its latest potential method is through an 'apply with LinkedIn' plug-in which will sit on employers' websites. In theory they would make money by aiding recruitment efforts. 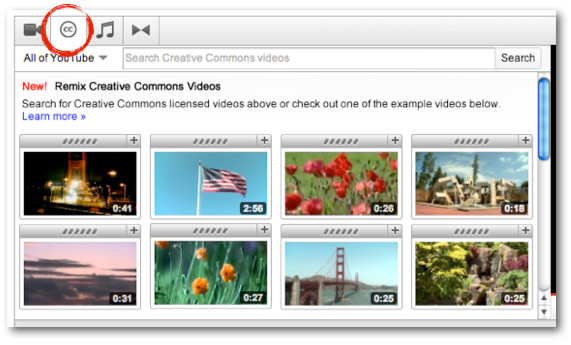 GetGlue will join forces with Entertainment Weekly for a new series of rewards focused on the magazine's top 15 movies list. The promotion, GetGlue’s largest to date, is sponsored by HTC, the cell phone maker.

YouTube hosts its own boot camp
YouTube has been giving out tips on, among other things, how to create a viral video - and the story merits reading, with a notable point how YouTube will be trying to discover talent in-house. Possibly on Friday...

Wateraid's 24 hour tweetathon
Tomorrow, Wateraid are hosting a 24 hour tweetathon, to showcase what they do on the frontline. It's a really worthy charity, so make sure to check out #wateraid24 tomorrow. The tweets will probably come pouring in (so I'll get my coat).

More magazine uses Facebook fans to co-create issue
In what is a really nice campaign, More magazine has tapped into the collective wisdom of its 100,000 Facebook fans to help decide what will be in next week's issue. With five superfans recruited to come in and work in their offices on the issue itself, its a really social campaign, with tangible results. Impressive.

KLM continues to fly with its social media work
Dutch airline KLM are making a habit of really clever and engaging campaigns. This time, after a request from two DJs, they showed how responsive they were to social media users - by setting them a challenge of finding 150 people - and in return they brought forward their inaugural Amsterdam-Miami flight by a week. Airborne.

Diesel + QR codes = win?
Diesel last week revealed how scanning QR codes on a pair of their jeans in a shop caused users to like them on Facebook - the issue with QR codes is whether they really do bring in more sales.

Topshop's tie-in with Instagram
Topshop are running cool, social-media related events in several large stores this week - with shoppers encourage to get dressed up in Topshop clothes, before taking pictures using an Instagram filter and uploading them to Facebook. In return, they can hope to win an £1000 shopping spree. Picturesque.

Samsung's bold - or stupid? - Twitter strategy
Samsung this week came out and explicitly tweeted what many brands imply - that users should avoid other costs to buy their products. The jury is very much out on whether this was a good idea... 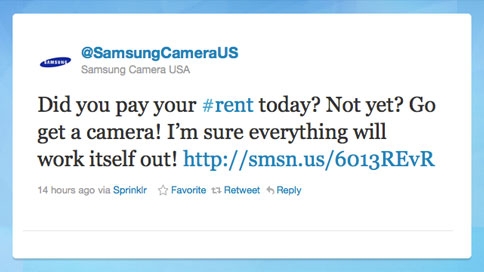 The ramifications of defaming brands on social networks...
The full power of what can and cannot be said on social networks has been exposed with the Ryan Giggs affair. It's interesting now to see how brands are hitting back - with Vodafone India suing a user for defamatory Facebook statuses, a Malaysian Tweeter given the equivalent of lines by being made to apologise separately in 100 different tweets. But in the Malaysian case at least, it does seem the action has garnered far more attention than there would have been otherwise.

In an even more bizarre turn of events, due to an old bit of law, it's now not permitted to say 'like us on Facebook' or 'follow us on Twitter' on French TV or radio. Sacre Bleu.