We Are Social's Monday Mashup #101

We are all social
Forrester's latest round of technographic data shows that social media is truly mainstream and stable, with little change in the US and Europe from last year's figures, aside from an increase in Joiners (people with a profile on a social network - Forrester's social media usage scale ranges from Spectators to Creators, depending on how actively they are creating and participating in social content).

However, the area of key interest this year is Asia, notably metropolitan China and India where 76% and 80% of internet users respectively are Creators (compared to 24% in the US and 23% in Europe). This means that almost 8 out of 10 people are generating social content, so look to Asia for the next big social trend... 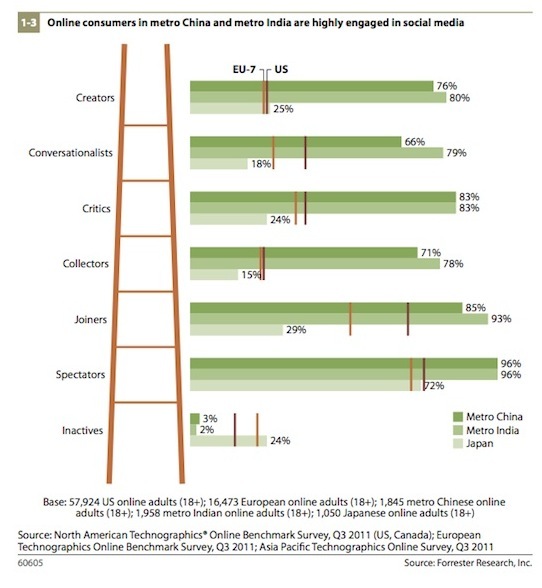 Marketers' relationship with Wikipedia to change
It all began with an open letter to Jimmy Wales and Wikipedia, stating how PR professionals and Wikipedia have to work together to ensure Wikipedia is an accurate and available resource to the public, and another blog post from Stuart Bruce drawing the same conclusion - Wikipedia's current guidelines need changing.

Fast forward two days and Wikipedia had agreed to work with the UK's Chartered Institute of Public Relations to that end. Roger Bamkin, Chair of Wikipmedia UK, commented:

Recent incidents [...] show that in some parts of the PR profession, a lack of understanding on how to engage with the Wikipedia community persists. We will work with the CIPR to ensure that their members, and through them the wider PR Profession, have access to the clearest possible guidance on the best way to work with Wikipedia.

It will be interesting to see how the CIPR and Wikipedia work this one out...

Google applies penalty against themselves
Google recently violated its own guidelines against paid links, when unbeknown to them, Unruly Media conducted a sponsored post campaign on their behalf to promote their Chrome browser, and one of the campaign's participants failed to use the 'no-follow' attribute when linking to the Chrome homepage. After an investigation, Google then applied a penalty against themselves so that searches for "browser" now no longer bring up the Google Chrome homepage, with Chrome's PageRank lowered for at least 60 days. Our very own Robin Grant commented:

I have a lot respect for Google for taking this action against themselves - although you could argue a two month ban is rather lenient compared to action they've taken against transgressors in the past. This incident goes to show the importance of the recently released joint IAB and ISBA guidelines on paid promotion in social media - had Google and Unruly followed these, they wouldn't have come a cropper, and it does highlight the very real dangers of non-compliance.

Facebook's flagged photos ... offensive or just unattractive?
Facebook have determined, that last year, the majority of photos its users reported as offensive were not actually offensive, in fact they were just unattractive or unwanted. The difficulty lay in the fact that often these were photos that friends had posted, meaning the user couldn't delete themselves, so they resorted to clicking flag instead. After Facebook noticed that the flagging tool was being used for these reasons, the company changed its photo reporting process, allowing users to message the person who posted the photo and complain with the following options: 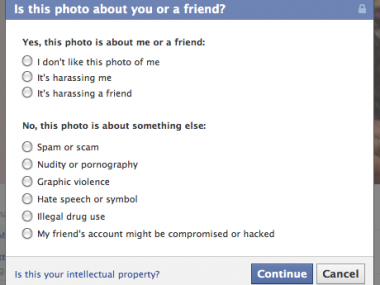 What vain creatures we are...

Moo creates social business cards with Facebook Timeline
UK startup Moo, is the only company to have integrated its social business cards with the Facebook platform. In an incredible promotion, they are giving away 10 million free business cards to the first 200,000 users who apply. The cards can feature different pictures on the front with a favourite quote or saying on the reverse which acts not only as promo for Moo but also for Facebook's Timeline experience. The first batch of cards were taken-up in only 2 hours, and the cards are continuing to sell out like hot cakes, so if you want a free social business card, you better be quick.

Instagram allows you to share larger photos... and welcomes the President
Now when you choose to share your photos to Facebook through Instagram, the images will be instantly uploaded to an Instagram Photos Facebook album. These will appear in their full size in user's newsfeeds and on the Timeline. Instagram also has a new VIP member, the one and only Barack Obama. Not only is he sharing photos through @barackobama, but he also urges supporters to share their photos from the campaign with the tag #obama2012. A clever way to give the public an insight into the daily life of the US President and to observe behind the scenes footage of the upcoming US Presidential Election.

Path is the new place to be
Path is where all the tech A-listers hang out these days, at least according to Seesmic's Loic Le Meur. This new mobile-only social network, with a limit of 150 friends, has created a small, private, place where you can hang out online at any time of day with your close friends, and get notified about them constantly. Path has also recently added the option of sharing to Facebook, Twitter, Tumblr and Foursquare all at the same time. When people are tired of everything being public, Path just may be their point of call...

Anti-Drugs Timeline
Israel's Anti-Drug Authority have cleverly used Facebook's Timeline. The fictional character Adam Barak's life is split in two, the Adam who pursued the path of drugs, and the Adam who stays clean. A neat way showing the possibilities of powerful messaging via the Timeline format, although brands will need to wait until Facebook rolls out the Timeline for Pages before executing similar campaigns.

Levi's use Instagram to find their latest model
Levi Strauss have opened up the casting to their 2012 Brand Campaign via the world of Instagram. Anyone around the world can upload a photo of themselves with the tag #iamlevis in the hope they will be the next star of the fashion brand.

Puma recruits bloggers to document sailing race
Puma recently recruited 10 Instagram and Tumblr users to document the Volvo Ocean Race, where the brand has a sponsored boat competing in one of the world's most gruelling sailing events. The bloggers will be also sharing their updates via Facebook and Twitter and have 'free reign' to cover what they wish. Puma clearly recognise the importance of bloggers as cultural influencers...

Olympics Games volunteers' social media restrictions
The Olympics organisers have released social media rules for the 70,000 Games Maker volunteers during the 2012 Olympics. Volunteers are not allowed to mention their role, location, celebrities and athletes, including a ban on photos or posts featuring backstage VIPs. Progressive!

Man City's Vincent Kompany takes to Twitter
Ahead of yesterday's FA cup clash, Manchester City took to Twitter with their captain Vincent Kompany, urging fans to send him inspirational messages ahead of the game, with the hashtag #followthecaptain. The fan who tweets the most inspirational message won Kompany's match day shirt, his armband and a signed poster of the tweet. After a number of footballers somewhat interesting relationships with Twitter, not mentioning any names...er...Joey Barton, let's hope Vincent's tweets keep him on the path of success.

Mothercare's successful contextual app campaign
Mothercare has grown both the number of followers and the levels of engagement on its Facebook page, and on that of its sister brand Early Learning Centre, following a contextualised Advent Calendar competition. The prizes were determined by Mothercare using their Facebook page to listen for which would be in the greatest demand by parents. The app added an additional 32,473 fans across both brands without the support of Facebook advertising and the competition received 128,850 entries, proving the power of listening really does work...

Shoe brand lets influential tweeters choose discounts
Miista, a relatively new shoe brand, launched 'Cheaper with a Tweet', where they reduce the price of their shoes for everyone whenever someone tweets about them. A greater discount is awarded if the person who tweets has a higher ranking on Klout. So if a kindly celeb were to tweet, the cost of a pair of shoes could be £0...

Grazia hosts Fashion Blogger Masterclass in Apple Store
UK Women's magazine Grazia are hosting a series of video podcasts, workshops and masterclasses on fashion blogging with a collection of the A-listers in the fashion blogosphere at the Apple store in Covent Garden. The masterclasses are free and are being held every Thursday in January, so for all the fashionistas out there, you know where to go.

Can man live on Social Media alone?
The London Social Media Week team have teamed up with friends in Singapore in an attempt to uncover whether man can live on social media alone. One lucky social media enthusiast will be flown to Singapore for 5 days equipped with nothing but a smart phone and the clothes they are wearing. They will then use the power of social media for food, accommodation, clothes and transport in the hope that the public's goodwill will provide all. If you think this is a challenge you can handle, there is still time to apply, simply submit a 60 second video demonstrating what social media means to you and why before the 13th Jan... 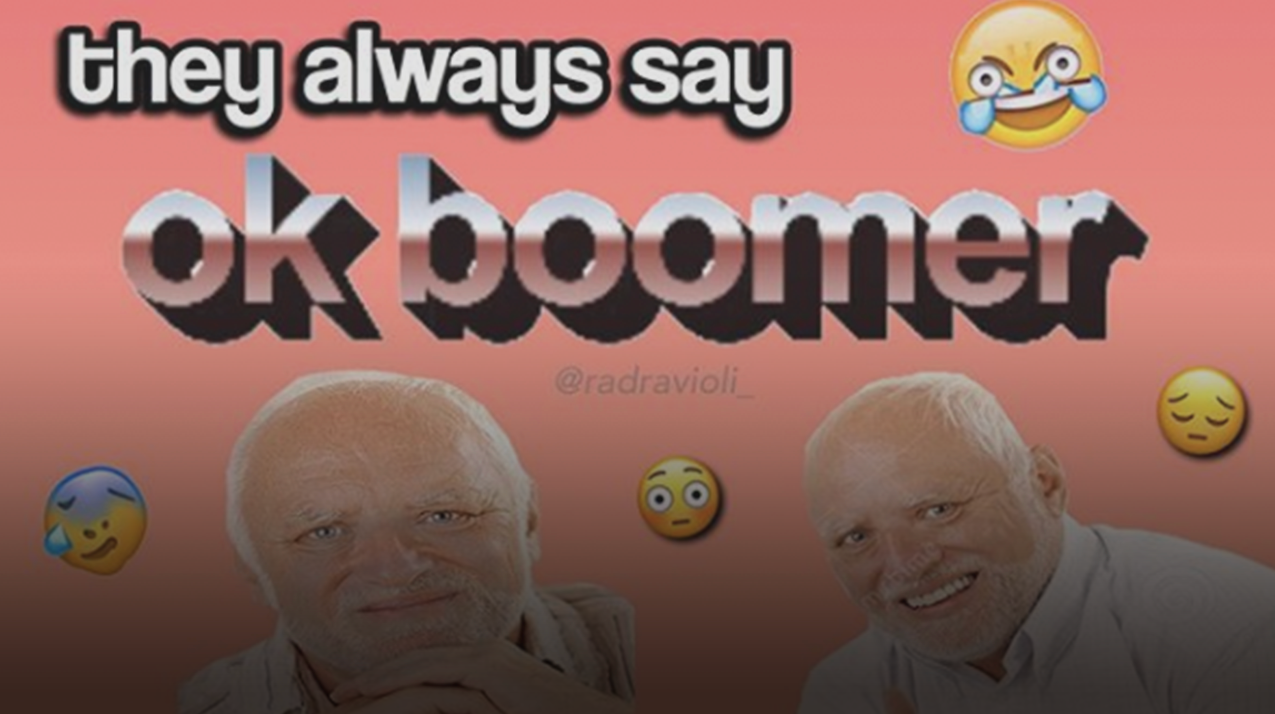 The Home Depot jingle is blowing up on TikTok, OK Boomer is a symptom of a divided digital society - and more.