The Rise Of Democratic Brands 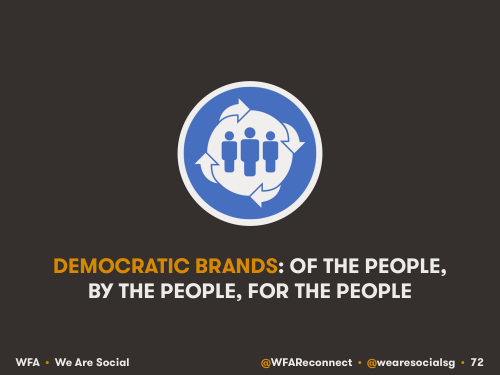 As part of our on-going work on #ProjectReconnect with the WFA, we have regularly seen evidence that 'inclusive' marketing approaches are amongst the most effective.

We joined forces with the Project Reconnect team to explore this topic in more detail, and they've been kind enough to let us share our findings here.

Marketing needs to become more democratic
The more people are involved in something, the more they engage with it.

This is true in marketing too, and the organisations that succeed in actively involving their audiences and consumers in the creation and development of their brands are best placed to succeed in the long term.

It’s perhaps little surprise, then, that ‘participation’ was one of the ‘New 4Ps’ that we proposed in our recent research for Project Reconnect (the other Ps were People, Purpose, and Principles).

So what does Participation mean for your brand?

The Rationale
A few years ago, Dan Ariely – renowned behavioural econometrician and author of Predictably Irrational – conducted some research into why IKEA has been so successful.

His findings clearly reveal that people place a higher value on things they’ve been involved in making, compared to things of a similar price that they’ve acquired in a completed state:

[The] experiments demonstrate that self-assembly impacts the evaluation of a product by its consumers; … when people use their own labor to construct a particular product, they value it more than if they didn't put any effort into its creation, even if it is done poorly. [source]

He goes on to say that their:

results showed that [people are] willing to pay more for furniture they assemble themselves, as opposed to pre-assembled furniture.”

In many ways, Ariely’s findings reinforce the psychoanalytic research conducted by Betty Crocker Foods in the 1950s, when the launch of their instant cake mix product 'flopped':

Although the average American housewife very much appreciated the convenience of the cake mix, she felt guilty at deceiving her husband and other guests into thinking she had worked hard for them when, in fact, she had done very little work.

[Betty Crocker’s] answer: add an egg. Changing the recipe to add an egg to the mixture offered the housewife a way out. By doing more than adding water - by adding a ‘real’ ingredient - she could assuage her guilt. The result: sales soared. [source]

The Opportunity
Such examples offer clear evidence that actively involving people in the process of value creation – even if that involvement is at a relatively low level – significantly increases people’s subsequent perceptions of value (i.e. the benefits that people feel they have received in return for the price they paid).

It therefore follows that marketers can increase their brand’s value proposition by involving people more actively.

This has its limits of course; many people are still willing to pay more for increased convenience, and most of us would be unable to build complex electronic devices or produce petrol on our own.

However, active involvement need not always require participation in the production or delivery of the final goods and services.

Indeed, the popularity of crowd-funding platforms like Kickstarter and Indiegogo is evidence that offering people a way to invest in the development and launch of a product or brand can deliver equally - if not even more - impressive results.

Getting Started
So how can brands take advantage of this interesting opportunity?

The answer lies in a more democratic definition of marketing: adopting an ‘of the people, by the people, for the people’ approach to co-creating mutual value together with audiences and consumers, rather than dictating what people should like or buy.

Simple ways to adopt a more democratic approach include ‘crowd-sourcing’ ideas – a technique that brands like Starbucks, Dell and Lay’s have already shown can add real brand value.

Chinese cellphone brand Xiaomi’s CEO, Lei Jun, is a vocal proponent of this more democratic approach to marketing and brand building too:

When Apple develops its iOS, you have no idea what they will do with it before the release. It’s not like that for us. We will first ask what you want. I feel Xiaomi’s most important secret to success is that Xiaomi is not selling a product, but an opportunity to participate.” [source]

Of course, people won't want to become an active participant in every brand they buy, but it’s clear that involving people in at least some aspects of your marketing can deliver better results.

And now that social and digital channels make it so much easier for brands to involve their audiences and consumers in such co-creation of value, this may be the most exciting opportunity for marketing in the next few years.

Taking our own advice though, we’d love to ‘crowd-source’ your thoughts and builds on this opportunity too, so please feel free to share your feedback and ideas on this topic on Twitter via the #projectreconnect hashtag.

The Value of Brand Values

As part of our work on #ProjectReconnect with the WFA, we've heard many of the world's top marketers...