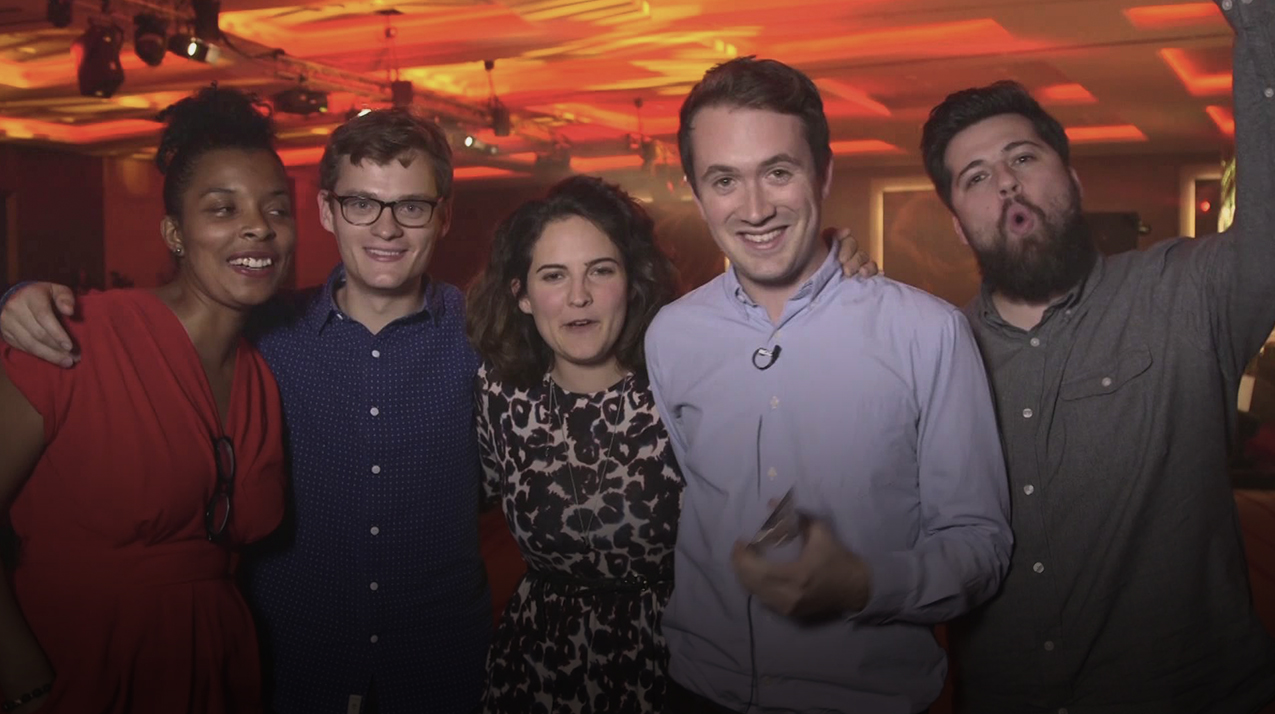 We’re Agency of the Year at the Dadis

Last night a few of our London team went along to The Drum's Dadi awards, celebrating the best work and the best people in digital marketing. We were nominated for a handful of awards, including the big prize of the night - Agency of the Year.

First up were the campaigns. We were chuffed to receive to commendations for our work with adidas, with our 2014 FIFA World Cup campaign #allin or nothing recognised in Digital Media Strategy, and @brazuca, bringing the World Cup ball to life on Twitter, in Use of Social Media.

Then, the night got even better when @brazuca was successful again, picking up the award for Best Travel/Leisure/Sports campaign!

With competition from the likes of Zone and iProspect in Agency of the Year, it was never going to be an easy win. So we were delighted when our name was called and luckily, Dan Moseley managed to keep his cool in the acceptance speech.

These awards come off the back of a winning couple of months for We Are Social, not just in the UK but all over the world. Our Singapore team have had a successful run recently, picking up a Gold for their Lenovo Light & Seek work in Best Use of Experiential/Live Marketing at the 2015 Loyalty & Engagement Awards, as well as a Bronze for Most Immersive Event Experience in the Marketing Events Awards. To top it off, they then picked up a bronze at the Asia Sports Industry Awards for their work with Fox Sports on the #AFFSuzukiCup, in the Best Use of Social Media in Sports category, and finally, a bronze award for Social Marketing Agency of the Year in Marketing Magazine Singapore's Agency of the Year Awards.

At the global W3 Awards the London team were awarded for Best in Show in the Branded Content category for YouTube: #DontPanicButton, as well a gold for adidas: @brazuca in Best Social Content and Marketing in Sports, while our 2014 FIFA World Cup campaign for adidas, #allin or nothing, won a gold for Best Social Presence. @brazuca was also successful at the M&M Awards, winning the Best Use of Social Media category.

Earlier this month, the team also picked up two gongs at the Drum Dream Awards; Best Digital Campaign for adidas: @brazuca with a commendation in the same category for YouTube’s #DontPanicButton. @brazuca was also recognised in this year's IAB Mixx Awards in Europe with a bronze in Innovative Use of Social, alongside #allin or nothing which picked up a Silver in Brand Awareness & Positioning.

Our Paris team have had even more success with their Clio and Cannes Lions winning campaign, 'Hello Play!' for Hello Bank!, picking up a Gold in Social Media at the Trophées du Marketing Awards, winning in the Digital and Social Marketing category at Netexplo Change and picking up a bronze at the IAB Mixx Awards for Innovative Use of Technology. In Germany, the team triumphed at the Onlinekommunikationspreis in B2B Communications, for their #Mr.Torque campaign for Liebherr.

Even our global internal comms platform ‘The Ship’ has been at it, picking up an Intranet Standard of Excellence Award for outstanding achievement.

This is all down to a fantastic effort from our brilliant team all over the world; we're lucky to be working with such a talented bunch of people. A huge thanks to everyone who's contributed to both We Are Social's and our clients' success this year!