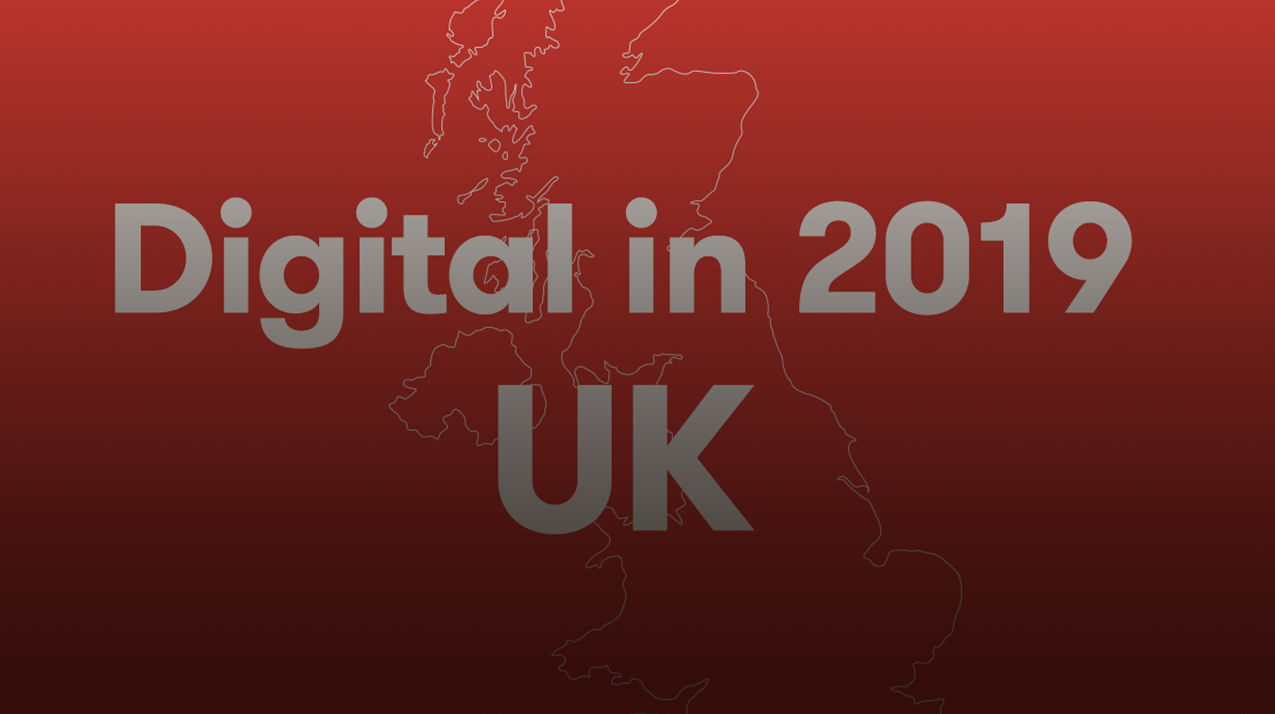 Digital in the UK: data and learnings for 2019

Earlier this year, we launched our latest suite of Global Digital Reports which, among other mind-blowing headlines, revealed that more than one million people came online for the first time each day since January 2018. A full digest of the global statistics can be found here, and in this post, our Communications Manager Ryan Dubras delves into one country in particular - the UK.

Where does the UK fit into the ever-changing digital landscape? Globally, we’re seeing significant growth in the number of active internet users (9.1%) as more and more people come online for the first time. However, in the UK, the last 12 months have seen an increase in new users of only 0.6%. The UK market is edging closer towards total saturation - internet penetration in the UK currently stands at 95%.

The growth of active social media users in the UK is also slowing, due to the fact that the majority of eligible audiences already use it. Overall, the penetration of social media in the UK market saw a rise of 1% over the last year, moving from 66% of the total population (all ages) in 2018 to 67% by January 2019. Social media is now an ingrained part of everyday life in the UK.

Despite being one of the most socially connected markets in the world, the UK is experiencing a drop in the time spent on social platforms each day. In 2018, the average time spent on social platforms was 1 hour 54 minutes; in 2019, this has now fallen to 1 hour 50. It may feel like a fairly minor change, but when compared to the record holders in the Philippines (4 hours and 12 minutes per day on social media) or global averages (2 hours and 16 minutes), the opportunities for marketers to reach British audiences seem more limited. 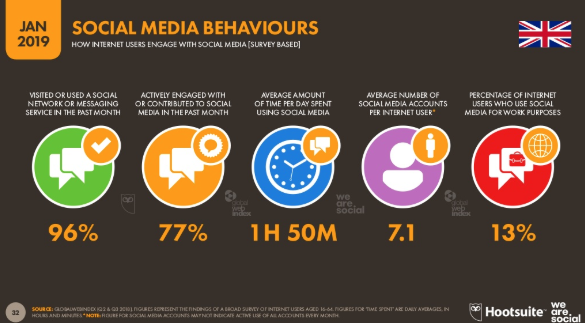 So, as competition for user attention on social media in the UK increases as people spend less time online - what do brands need to consider? And where do the next opportunities lie?

The who, where and when
While the likes of YouTube, Facebook (and Messenger), WhatsApp and Instagram are still leading the charge in terms of user numbers in the UK, growing platforms such as Twitch, WeChat and Reddit are becoming increasingly popular hubs for sub-cultures online. 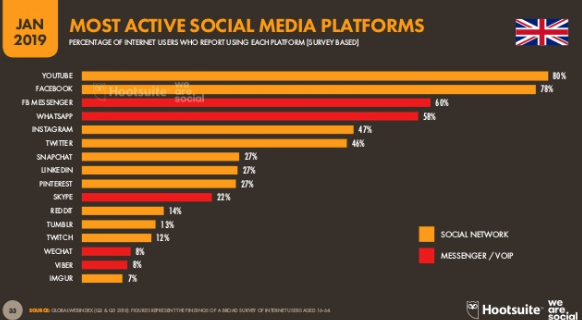 On average, each of the 45 million social media users in the UK now has 7.1 social media accounts. According to our latest Think Forward report, people are likely to be portraying a different version of themselves and engaging with a different community on each. Brands should explore opportunities to engage communities beyond ‘the usual suspects’ on social, and make sure they create meaningful connections with consumers, wherever they’re spending their time.

Spend, spend, spend
The British public is embracing e-commerce with open arms. According to our latest findings, 81% of internet users in the UK have now bought a product or service online; with 45% of us now feeling comfortable purchasing items via mobile devices.

Of the top ranking sectors attracting online spend, travel ($42.2bn), fashion and beauty ($23.44bn) and electronics and physical media ($19.43bn) are the biggest winners in the UK. 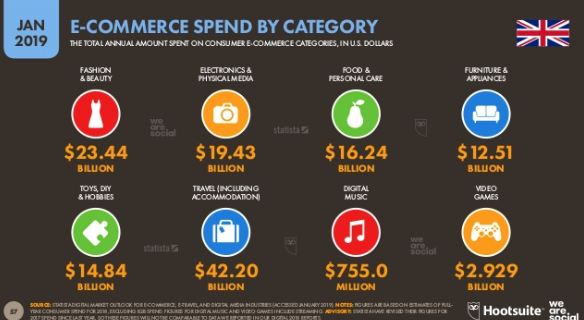 This means is that while audiences in the UK may be spending less time online (5 hours 46 minutes a day, compared with 5 hours 51 the previous year) or scrolling through social media; when they are online, they’re often ready to part with their hard-earned cash.

We’ve seen the growth in ecommerce reflected in some of the more recent updates from social media platforms who want a bigger slice of the ecommerce pie, such as 'Shop the Look' Pins on Pinterest to Shoppable Story Stickers on Instagram.

So… what’s next?
Some of the world’s top social platforms continue to lose users over extended periods - Snapchat was down 14% of its total advertising audience in the UK last year and Twitter falling 0.7%. With stats like this, it’s possible that we’ll begin to see some consolidation in the social media industry over the coming months, perhaps in the form of acquisitions by the major players.

At the same time, privacy concerns are likely to continue to drive big changes in the way people behave online and the data-exchange they’re willing to be a part of in order to use a ‘free’ service. Even in the first few weeks of 2019, we’ve seen Facebook, YouTube and others reassessing how they can offer better security and privacy options on their platforms.

With Facebook’s recent landmark announcement that it will be completely overhauling its practices, with the aim of becoming a privacy-focused social network - even to the potential detriment of its ad business - we could be about to see big changes in the way brands engage with and operate on the big social platforms, as well as their audience.