We Are Social’s Monday Mashup #467

Facebook reports user growth and strong Q3 results
Despite current scrutiny, Facebook - the embattled social media giant - has kept growing in Q3. Last week, the platform reported that it has reached 2.45 billion monthly users, up 1.65 per cent from 2.41 billion in Q2, and now has 1.62 billion daily active users - an increase of 2 per cent of Q2. 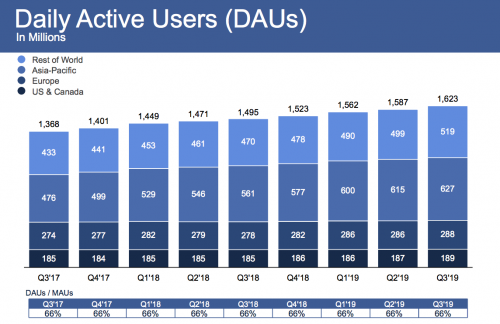 Notably, Facebook has gained 2 million users in each of its core US/Canada and Europe markets, after quarters of shrinkage, no growth or weak growth there in the past two years. The company says that 2.2 billion people now access Facebook, Instagram, WhatsApp or Messenger every day (up from 2.1 billion last quarter), and 2.8 billion people use one of this family of apps each month. The platform has also reported revenue of $17.652 billion in Q3, up 29 per cent year-over-year.

During the earnings call, CEO Mark Zuckerberg also defended the social network’s political advertising policy and explained that “ads directly from politicians will account for less than 05. per cent of Facebook's revenue next year. However, for context, that could still be as much as $330 million to $400 million.

Facebook rolls out new updates for Messenger
Facebook has released the latest version of its Messenger Graph API, which includes three new features for Messenger to help brands better connect with consumers. The upgrades include new 'icebreakers' for brand profiles - allowing businesses to list common questions that users can ask them to initiate the conversation; the introduction of Reactions to business chats; and a simplified process for connecting apps to Messenger ad campaigns.

Facebook launches 'Work Groups'
Facebook has rolled out a new Group option, called Work Groups, to help users connect with co-workers without having to let them into all personal interactions. The new update - which is currently available on desktop, iOS and Android versions of Facebook and Messenger - allows users to create a specific Group only for work colleagues, with only their work-related information showing on their Work Group profile. The option also enables Work Group members to send messages to each other without needing to be Facebook friends.

•Only show work-related info (job title, company + location) when a person’s profile is viewed in group

•Allow group members to receive messages from each other without being friends pic.twitter.com/SrWSCRLUaA

Snapchat introduces new 3D Paint feature
Last week, Snapchat announced it is adding a new 3D Paint feature to its platform. The new functionality enables users to either draw on their own face in augmented reality using the phone’s front-facing camera, or use the rear-facing camera to draw objects in the environment around them. iOS users can now find the feature within the 'Create' section of Snapchat's AR Bar. The platform says the update will be coming to Android in the coming months.

Snapchat now lets you 3D Paint faces and pretty much anything else https://t.co/Ixl6pq5jme pic.twitter.com/ty8bzyOOAy

Twitter takes a stance against political advertising
Twitter's chief executive officer, Jack Dorsey announced last week that the social platform will ban political ads starting from November 22nd. Commenting on the decision in a Twitter Thread (below), Dorsey noted that a "political message earns reach when people decide to follow an account or retweet" and that the platform believes that "this decision should not be compromised by money.” Twitter is expected to share its full policy on November 15th and has said it doesn't expect a sizable revenue hit as a result of the decision.

However, while the ban plays to Twitter's strengths, our Senior R&I Director in London André van Loon believes that the move may backfire, and predicts "political ad spend moving even more into Facebook’s suite of services." Read his full piece in PRWeek to find out why.

Pinterest announces Q3 results, reports 322 million users
As part of its Q3 earnings report, Pinterest has revealed that it now has 322 million global monthly active users, up 28 per cent year-over-year, citing double-digit growth in nearly all countries outside of the US. The platform also reported revenue of $279.7 million, up 47 per cent from $190.2 million from its earnings in the same quarter of last year. 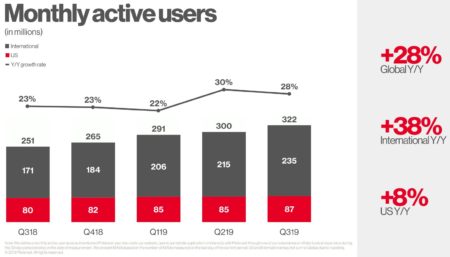 The company now sells ads in 28 countries, up from 19 at the end of the second quarter, adding Cyprus, the Czech Republic, Greece, Hungary, Luxembourg, Malta, Poland, Romania and Slovakia to its growing list.

In its report, the platform also credited upgrades to its ranking algorithm for lowering home feed hide rates by 25 per cent quarter-over-quarter; while improvements to its personalised search recommendations have doubled engagements with recommendations year-over-year.

Pinterest reveals a refreshed look for iOS and Android
Pinterest has rolled out a number of small updates to its app on Android and iOS, aimed at refreshing its appearance with “a more immersive design that’s streamlined for Pinners around the world.” As part of the update, recommendations have now been brought to the forefront of the home feed, while Pins have increased in size to have more prominence on a mobile screen. 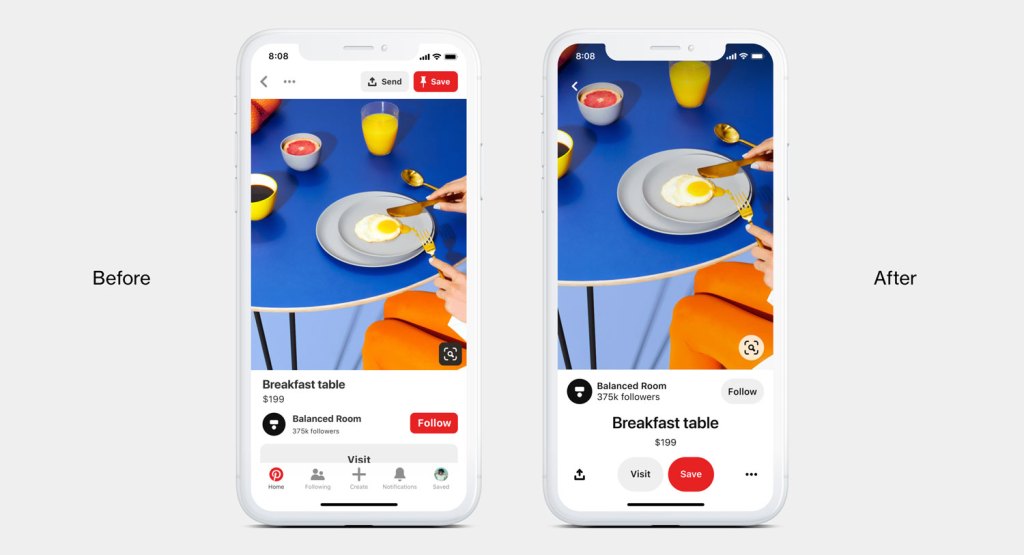 Other changes to the platform include: Search now appearing within a separate navigation bar; the 'following' tab now appearing at the top of home feed; and an updated Profile and board view. Pinterest says the update will continue to roll out around the world.

Watch this space...
Facebook is adding a new feature, called 'Multiple Text Optimization', that will enable advertisers to supply multiple text variations for ad copy which Facebook will then select for the best results; Facebook has also added a new 'Suggested' time option for scheduling Page posts. 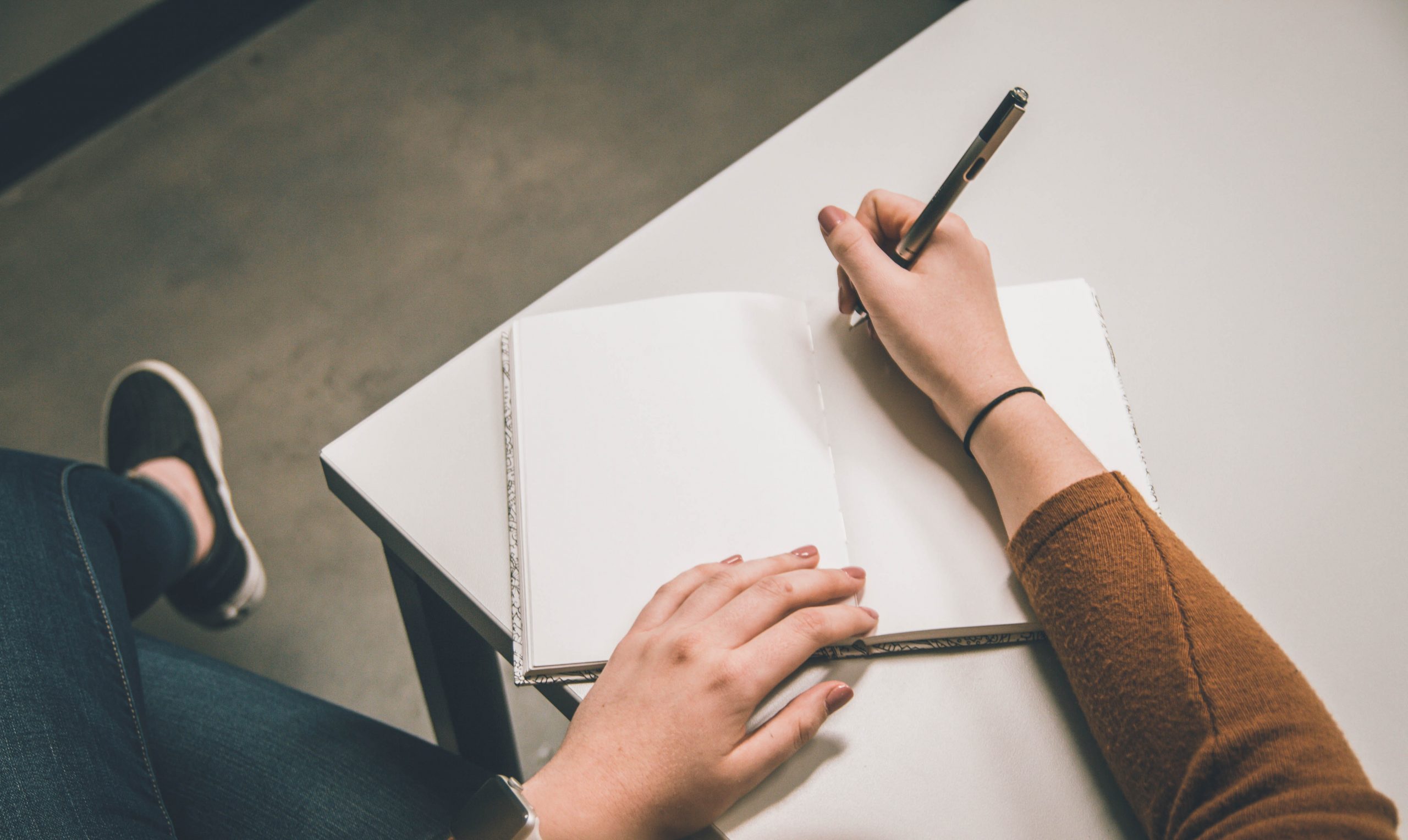 Dyslexia and a career with words

Our Interim Head of Editorial, Sarah Hecks, discusses how companies can actively champion dyslexics by celebrating their differences.