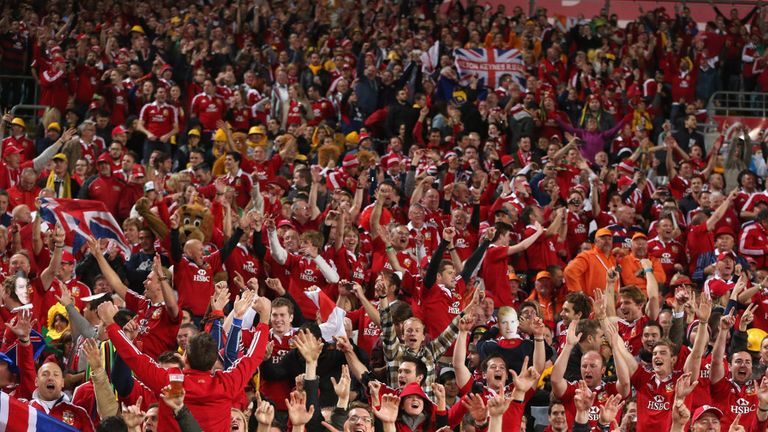 The British & Irish Lions tour squad announcement is taking place today - but this year's team will be playing without the support of fans. Our Group Account Director, Andrew Boyers, looks at the role social can play in uniting rugby's fans and players in these unusual circumstances.

‘Just not the same.’ ‘A shadow of its former self.’ A lot has been said about the absence of fans in sport for the last 12 months.

It’s been a different experience not just for fans watching, but for the sportsmen and women playing, too.

Few sporting events match the British & Irish Lions tour for having such a close and important connection with its fan base - particularly in the stadium.

Lions and the Sea of Red
The famous ‘sea of red’ - the name given to the thousands of fans that follow the Lions on tour - have created iconic moments such as outnumbering the home fans in New Zealand during the latest tour in 2017.

So it was a double-edged sword when the Lions announced that this year’s tour of South Africa would take place without fans in stadia. On one hand, excitement that one of sport’s great spectacles would definitely be taking place. However, this was tinged with disappointment that a fundamental aspect of the tour would be missing; the fans.

Fan support has a massively positive impact on sportsmen and women, helping to give them a competitive advantage in those clutch moments. That is especially true with the Lions and its travelling fans.

Ex-Lion player and coach, Sir Ian McGeechan underlined fans’ importance when he said: “Going to South Africa as a player, you can never underestimate the power that you have as a fan, coming and being out there and actually being part of the ‘sea of red’”.

So at a time when fans still can’t be the 12th (or indeed the 16th in the case of the Lions) man in the stadium, can social be the platform that helps bring that support to the players?

Connection through social
When done properly, social media can be such a huge positive value exchange for sports fans. But it can also be a positive for the players or clubs themselves - a fact that is often overlooked. Check out Hector Bellerin, who has become lauded for his book recommendations to fans. Or Lando Norris, leading a new generation of F1 drivers that are committed to embracing social media to give fans a view on their lives in the paddock. Or, of course, the legend that is Marcus Rashford.

All of them are fully engaged and create a close connection with their audiences, are passionate about what they share and take huge value from the communities they’ve built.

When you see the potential of social in connecting fans and players in plain sight, it’s still incredible to see so many clubs and players pay such little attention to what they post - think Joe Hart posting ‘job done’ after Spurs had just lost 3-0 to Dinamo Zagreb recently.

So much of sport content on social media still manages to be ill-timed, pre-planned, or generic to the point of pointlessness. And ultimately, that benefits neither the fans, or the players. Especially when fans and players are still so physically disconnected.

Feeling closer to home
For the Lions in particular, where fans are so key to the story, social media will not just be about how fans can feel connected to the tour taking place thousands of miles away. It will be as much about how players can feel connected to the fans at home. Using their social media channels to see that friends, family and fans are all behind them, giving them that performance boost from the support that clearly means so much.

Facilitating the connection of fans and players offers a huge opportunity for brands who are looking to leverage sporting sponsorships to land themselves credibly with an audience. But it requires a brave and bold approach.

The instances where fans and sports stars feel closely connected on social can easily feel like an exposed place to be for brands, where control of the outcome isn’t as strong. But those instances are also the most exciting, and offer the best value for everyone involved.

Our work with Vodafone, who are a lead partner of the British & Irish Lions Tour this year, aims to deliver on that brand opportunity - closely collaborating with the Lions and the players themselves to help tell a rich, emotive and - at most importantly, real - story of the tour.

As they jet off to South Africa, the players will become our content creators while on tour, giving as authentic a view as possible of their day-to-day. It’s exciting to be part of a campaign that is committed to creating a genuine connection between fans and players that is so important to both sides.

It’s inevitable that the Lions tour won’t be the same without the Sea of Red roaring the team on in South Africa this year. But, without fans in person, the connection can still be as strong remotely. A lion’s roar can be heard from 8km away, but the power of social can ensure that it’s heard much, much further than that this summer.