Reddit launches Ask Me Anything app
After a failed attempt at launching an app in 2011, Reddit has rolled out an app centred solely on its "Ask Me Anything" series. Featuring a wide range of participants, such as politicians, television and film stars, and musicians, the series is one of the site's most popular destinations.

The app departs from the site's trademark simple look, instead featuring a sleeker display. Using left and right swipe motions, users can navigate between different question threads, and have the ability to forward links by text, email, Facebook, Twitter, LinkedIn, Google+, and other sites. The app also gives users the opportunity to filter content to their own preferences, enhancing their experience, and making it even easier to find out more about the famous, notable, and interesting! 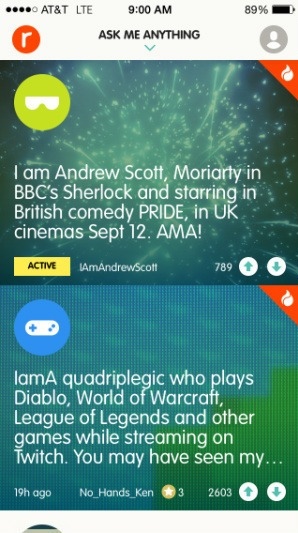 YouTube fan funding
YouTube is trialling a fan funding feature, giving users the chance to show even more love to their favourite channels. The feature can only be used if the channel owner has chosen to turn it on, and may provide further income for content producers, beyond ad revenue. While channel owners receive the bulk of the donation, Google claims five percent of the total, and a small fee. The feature is currently being trialled in the USA, Japan, Mexico and Australia, with views to expand in the future.

Social is increasingly important for marketers
The CMO Survey was released last week. The survey of 351 ‘marketing leaders’ shows social is becoming ever more important to brands; it now makes up 9.4% of marketing budgets, expected to rise to 21.4% within five years.

However, as you can see below, ROI is still proving tricky. Particularly sad is the big blue section, made up of the 45% who can’t show the impact of all the fantastic work they’re doing. Expect to see increases in budgets for measuring ROI.

How cost efficient is social advertising?
Very! Wonderful news. Q2 analysis by Neustar has found that social ads outperformed ad networks, portals and exchanges for cost efficiency. Look at the graph, the graph says it all:

How social network ads affect buying decisions
So social ads are cost-effective, but which platform is king? Analysis by AoI Platforms of data from 500m clicks has found that YouTube is the best social network for introducing customers to new products, with Facebook coming in second. YouTube manages to perform well throughout the buying decision process, unlike Twitter, which is pretty much only useful during the middle phase.

Over 50% of people have a mobile phone
Half of the world now owns a mobile phone. At the time that we published our article on the subject, there were 7.258bn global citizens (though a few more have probably arrived in the last week), compared with 3.630bn unique mobile users.

Video is one of the most engaging and immersive ways to tell your story. Whether capturing breaking news, a baby’s first steps, or rising to a friend’s challenge for charity, it is a remarkable storytelling medium.

He doesn’t say what percentage are ice bucket challenges. We may soon know, though, as videos from public users and pages are set to display a view count in the near future.

‘Privacy Checkup’ debuts on Facebook
Facebook has rolled out ‘Privacy Checkup’, which it has been testing since March. Each user who logs in will see an option to edit their settings, guided by a cartoon dinosaur. (A tyrannosaur? Our taxonomy skills have left us wanting.) Here’s how it all works:

Twitter adds a buy button for mobile commerce
Get set to start purchasing through Twitter – the network has just added a ‘buy now’ button for iPhone and Android. It’s chosen 25 beta partners, which include two brands (Burberry and Home Depot), but are largely made up of celebrities. Musicians are an important part of the partnership, and celebs will be able to act as paid influencers for brands. You can find out about how it works in the below video:

Snapchat adds London geofilters
Snapchat has added 30 London-specific geofilters, which are only accessible in certain parts of the capital. Two of them have been revealed: the London Eye and Tower Bridge, but the other 28 remain a secret for now.

Netflix adds greater sharing controls
Netflix is allowing users increased privacy over what they share on Facebook. Previously, anyone who had linked their accounts would automatically share what they’d watched with any Facebook friends signed up to Netflix. Now, you can tell everyone about that Scandinavian crime drama, but keep Gossip Girl to yourself (or vice versa, of course).

Social media talks about the NFL
The new NFL season kicked off on Thursday to a roaring online reception. There were 15m total Facebook interactions from 8.5 million users, and the network released a map of the most popular team in each US county, measured by official page likes:

Frito Lays used the event to commence its latest campaign, in which fans must like a ‘Fire Drill Alert’ posted during Thursday night games, for the chance to win prizes from tubes of Stax to Superbowl tickets.

Asda set to launch YouTube commerce
Walmart-owned UK supermarket chain, Asda, is set to allow YouTube users to purchase its products without leaving the site. A new partnership with e-commerce service, Constant Commerce, will allow the brand to display a list of products alongside its videos, which users can add to their basket before checking out, without ever leaving the video.

Samsung launches #thatsucks campaign
Samsung has been walking the ‘fail’ tightrope with its latest vacuum cleaner campaign, dubbed #thatsucks. It has received a couple of negative responses, but in large part shows that it’s possible to take risks in social and succeed.

adidas crowdsources NYFW show
adidas put on the world’s first crowdsourced fashion show during New York Fashion Week. Dubbed #NEORunway, almost every element of the show was chosen by fans – from hair and makeup to music, outfits and even set design.

Starwood looking to LinkedIn with $30m campaign
Hotel chain, Starwood, is putting LinkedIn at the centre of its latest campaign, worth $30m. It is looking to promote its ‘Starwood Preferred Guest’ loyalty programme in the business market, making LinkedIn a good fit, though it will also increase the volume of its content on Facebook, Youtube and Twitter.

EA creates social media sitcom
EA is pushing the launch of the Sims 4 with a sitcom that takes place on social media. Four different characters, each with a personal Twitter account, will act out the story over two weeks. It’s based on ‘Gone With The Wind’, so they’ve taken a punt and are calling it ‘Gone With The Sims’.

Snuggle Bear gets social
Snuggle is bringing its mascot, the Snuggle Bear, into the 21st century. He’ll be debuting on various social channels for his 30th birthday, as part of an editorial-led campaign across Facebook, Twitter, YouTube and Instagram. Now, you’ve been very good and finished your whole mashup, so here’s a picture of the cuddly chap. Don’t say we don’t treat you.

Half of Africa's internet users now using Facebook
Facebook has recently announced that it has reached 100 million users in Africa, meaning that approximately 50% of all internet users on the continent now have a profile on the site. The announcement suggests that if improved internet connectivity spreads across areas of the world without steady internet access, such as South America and India, Facebook could potentially gain even more users.