Yahoo to buy Tumblr for $1.1 billion

As has been rumoured for the last few days, Yahoo is set to purchase Tumblr in a $1.1 billion all-cash deal, which has been announced in blog posts by both parties. First of all, Yahoo CEO Marissa Mayer announced the move, using the provocative image above in her post and discussing the various improvements that Yahoo hoped to see in terms of audience and traffic, whilst reassuring those concerned that David Karp would remain CEO and that "we promise not to screw it up". A similar message came from the other side, with Karp himself ensuring Tumblr users that the system was not set for any wholesale changes, like turning purple or hiring a different set of staff. Despite these concerns, the deal could prove to be hugely positive for all involved. In April, Tumblr saw 117 million visitors and has a total of 107.8 million blogs and 50.6 billion posts. Indeed, in terms of users it ranks around the same level as Twitter and well above Instagram and Pinterest, with current total user figures of somewhere between 150 and 200 million. 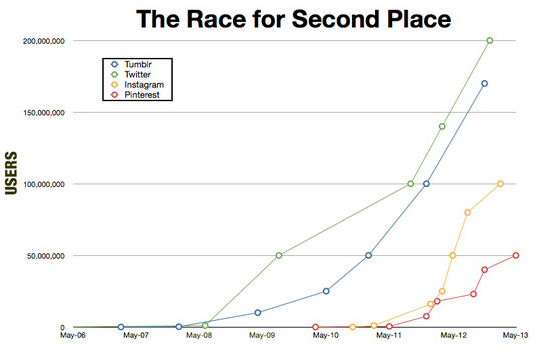 Nevertheless, the caution displayed in both blog posts is as a direct result of real fears amongst Tumblr users, based on Yahoo's history of unsuccessful platform purchases, from Geocities and Flickr to Delicious and Konfabulator, amongst others. Moreover, Mayer has confirmed that Yahoo is planning to run more ads on the platform. On monetisation, she stated:

On Tumblr, there’s a number of different places where we think we can monetize in a way that is meaningful and really addititive to the user experience.

For example, Tumblr has what’s called the “dashboard”, which is their version of the newsfeed — or in old school terms, an “inbox” for the blogs you follow. So basically different bloggers that you follow can all appear there in your feed.

And today, Tumblr already does some advertising, though minimal, in that feed. We would like to look at them and understand how we could introduce ads — in a very light ad load — where the impact is really created, because the ads really fit the users’ expectations and follow the form and function of the dashboard.

We also see some opportunities to possibly work with bloggers who want ads, to provide ads on their Websites. That would always be done with the blogger’s permission.

All in all, the deal presents both a great risk and an exciting opportunity. The $1.1 billion amounts to roughly 1/5 of the $5.4 billion that Yahoo still own in cash from sale of stocks in Alibaba Holdings Group, a Chinese internet company. Nevertheless, as Tumblr's figures above show, this money could prove to be well spent, especially if it manages to push Yahoo's share price up to $33, the figure for which co-founder Jerry Yang refused to sell the company to Microsoft five years ago.

To sum up, when talking to The Drum about the issue, We Are Social's Robin Grant said:

With Yahoo's entire ad sales team now likely to be selling Tumblr ads, Mayer will need to walk a tightrope between the clear need to monetise and, on the other side, upsetting Tumblr's users by showing them too many ads, especially bad ones. Mayer will also need to give Karp the freedom to grow and inovate the Tumblr platform, something they seemed unable to do in the past with their Flickr acquisition.

Update: Watch We Are Social's Marketing Director, Tom Ollerton, on the UK's Channel 4 News commenting on the takeover (at 1m 34s):