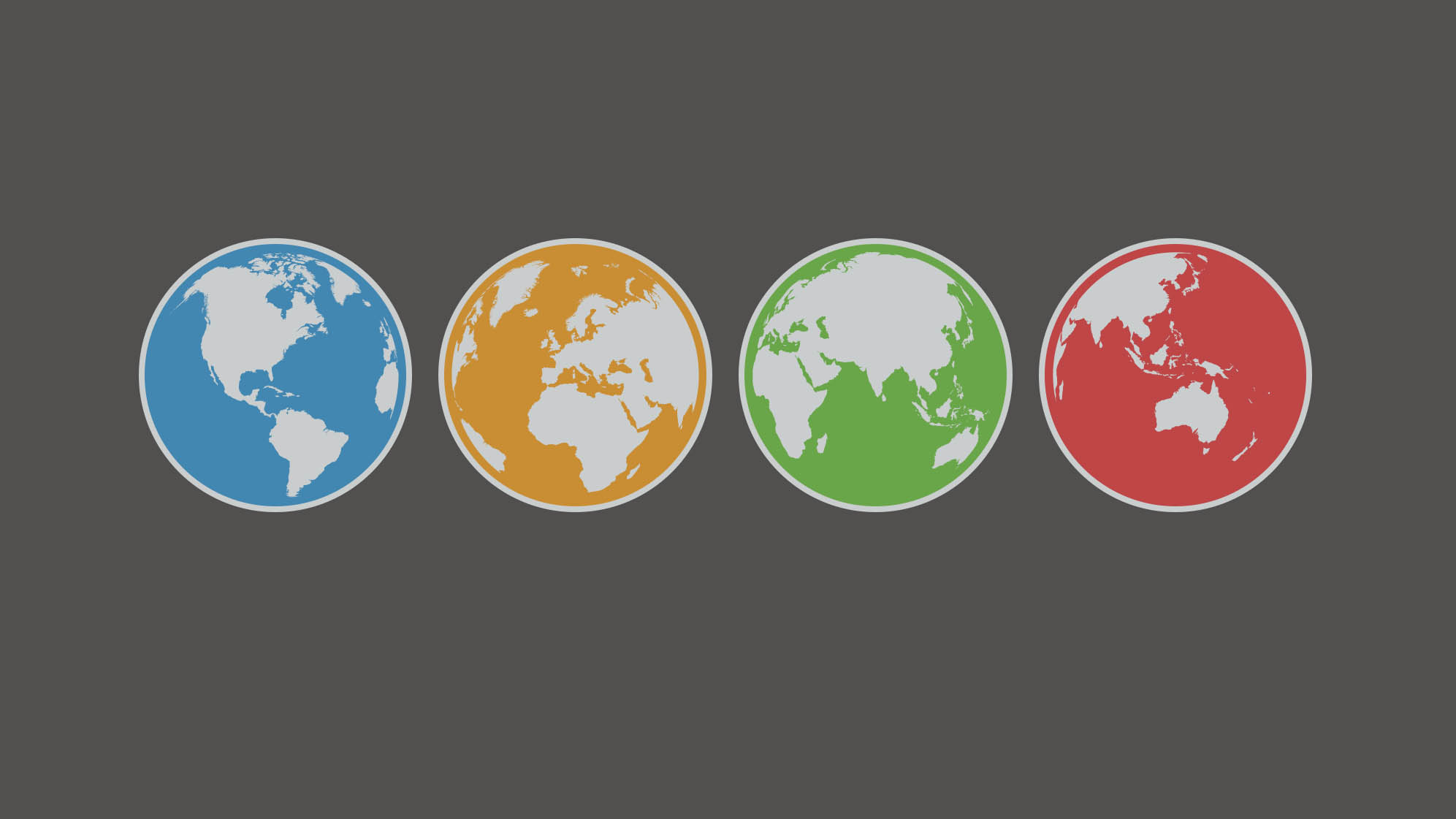 Social media use jumps in Q1 despite privacy fears

The latest in his ongoing series of Global Digital reports for We Are Social and Hootsuite, Global Consultant Simon Kemp shows that the number of people around the world using social media grew by more than 100 million in the first three months of 2018, reaching almost 3.3 billion by the end of March. 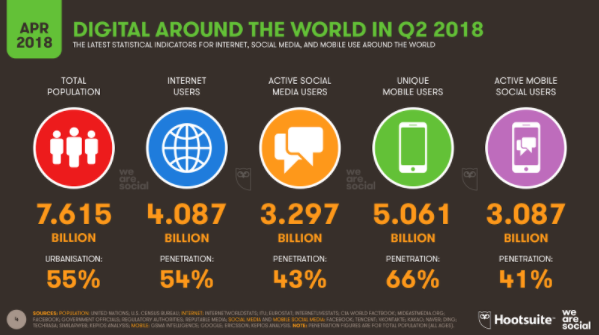 There’s loads of new data to cover in this quarter’s analysis, and I’ve saved some of the best numbers for the end of this article too, so go grab a coffee and get comfortable before you begin.

Essential stats
There was plenty of strong growth across all things digital in the first quarter of 2018.

The number of internet users rose by 276 million between January and March, reaching a total of 4.087 billion by the end of the quarter.

More than 5 billion people around the world now use a mobile phone, with roughly 6 in 10 of those users owning a smartphone.

The numbers show that mobile users grew by roughly 2 percent in the 12 months to March, but GSMA Intelligence recalibrated its dataset in February, so the actual growth figure may be even higher.

Meanwhile, mobile continues to grow its share of social media use, with 389 million people accessing social media via mobile for the first time in Q1.

This 14 percent increase takes the number of mobile social users well past the 3 billion mark, with the total standing at 3.087 billion at the start of the second quarter. 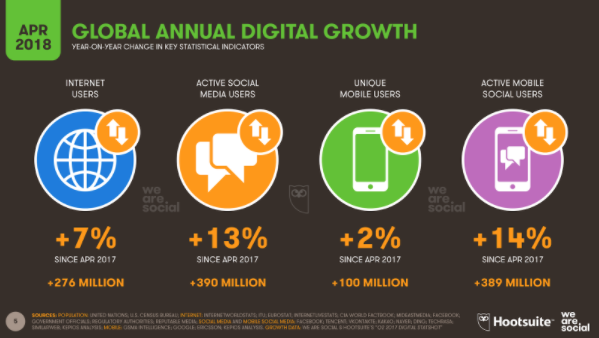 You’ll find the full set of Q2 data in the SlideShare embed below (click here if that’s not working for you), but read on beyond that for some richer context and analysis.

No sign of antisocial behaviour
Despite mounting concerns about the amount of data collected by social media companies, the latest data show that social media growth is actually accelerating.

390 million new users signed up to a social platform in the twelve months to the end of March – that’s 8% faster than the same growth trend this time three months ago. 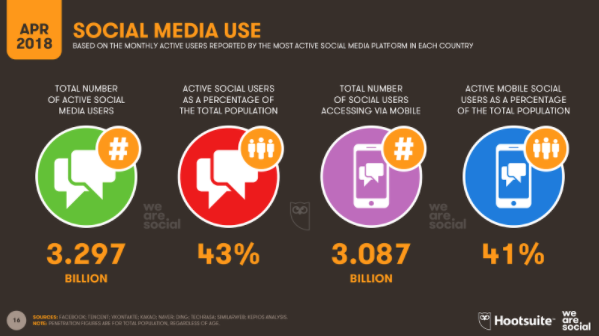 These trends mean that well over a million people are still signing up to social media for the first time every day – that’s about 12.4 new users every second.

What’s more, as I noted in my recent in-depth report, the Cambridge Analytica affair doesn’t seem to have affected growth trends in Facebook’s overall user numbers.

The platform has posted 3.2 percent growth in monthly active users (MAUs) since the start of 2018, with Facebook’s own advertising tool reporting a total of 2.234 billion global users at the end of March.

Specifically, that means that 67 million people have started using Facebook in the past 3 months alone. 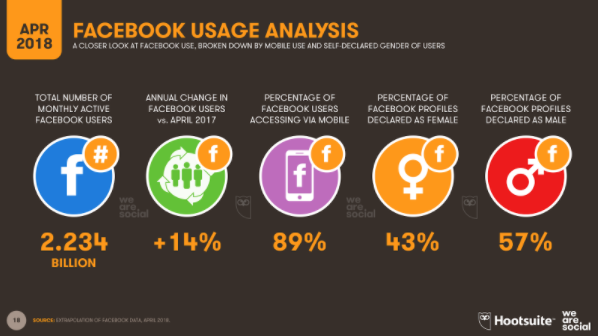 That growth seems to be fairly consistent around the world as well – even in those countries most impacted by the Cambridge Analytica story.

However, Facebook is seeing even faster growth in APAC.

India added 20 million new Facebook accounts since the start of the year (up 8 percent), while Indonesia saw an increase of 10 million users (also up 8 percent).

9 out of Facebook’s top 10 countries saw positive growth in MAU figures between January and March, with only Brazil staying steady at 130 million. 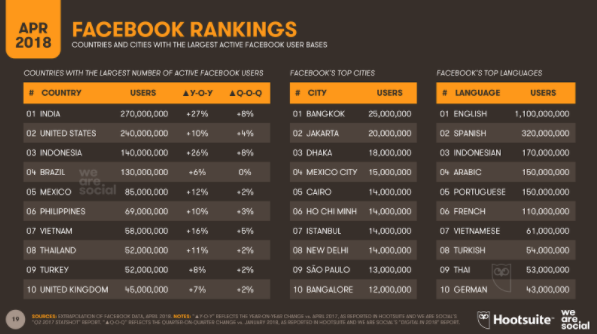 However, our latest set of numbers reveal some bad news for Zuck and team as well.

It’s official: young people really are leaving Facebook
The media have been reporting that young people are ‘deserting’ Facebook for some time, but this is the first time in the 7 years that I’ve been collecting this data that Facebook’s own numbers actually corroborate that story.

The latest data suggest that the number of 13 to 17-year-olds using Facebook dropped by 10 million since January – a fall of around 6.5 percent: 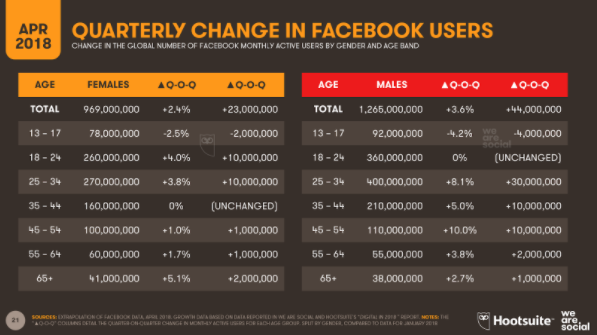 However, it’s worth noting that Facebook rounds the numbers it reports at this level to the nearest 10 million, so it’s likely that the actual drop was less than 10 million (for example, a drop from 176 to 174 million users would have resulted in the same reported figures).

More older people are joining Facebook
The good news for the Menlo Park crew is that the fall in teenage users has been more than offset by some impressive growth amongst older users.

Facebook added 17 million users aged 45 and above in the past three months, with 3 million of these aged 65 or over.

The median age of Facebook’s active users is still below 30, but this creeps up each day, especially given the changes amongst those younger users that we covered above. 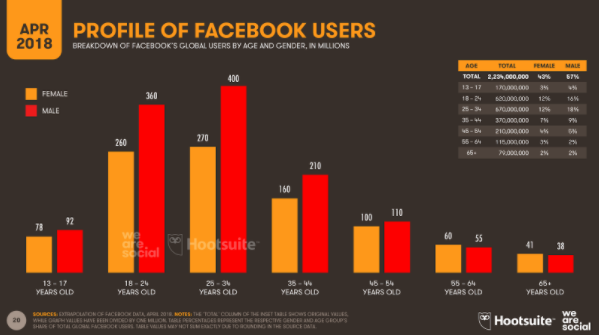 What (and who) do Facebook users ‘like’?
Cristiano Ronaldo has the most ‘liked’ page on Facebook, with more than 120 million ‘fans’ (note that this figure may include users who are no longer active on the platform).

Shakira, FC Barcelona, and Vin Diesel have all surpassed 100 million Facebook likes too, while sports, music, and movies dominate the rest of the top 20. 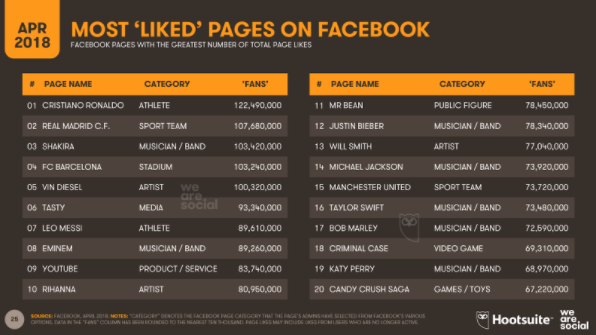 However, despite these impressive numbers, some data in the platform’s own Insights tool shows that the typical Facebook user has only ever ‘liked’ one page.

This is a median figure (as opposed to an average), but it’s quite telling that most people don’t seem to be particularly interested in filling their Facebook feeds with updates from celebrities or sports teams, let alone with updates from brands or governments.

Interestingly, though, the same data set shows that the typical Facebook user clicks on 10 Facebook adverts every month, with women clicking on 12 paid placements in the average 30-day period. 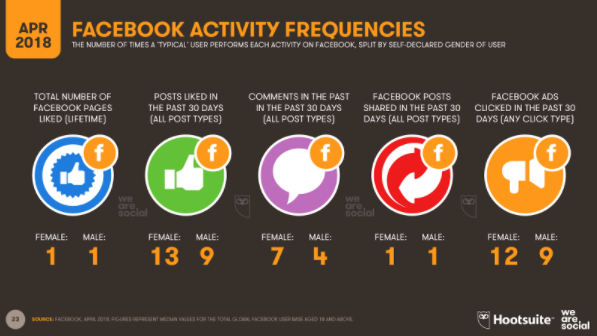 Women are more likely to comment on Facebook content than men as well, with women making a median of 7 comments a month, compared to 4 for men.

Neither gender shares posts very often though; the latest data suggests that the typical user performs this action just once in any given month.

Facebook reach and engagement tumble
These insights into the activities of ‘typical’ Facebook users add some useful context to the latest data on user engagement from social media analytics firm Locowise.

The company reports that average engagement has dropped by 3 percent in the first 3 months of 2018, down from an average of 4.20 percent in 2017 to 4.08 percent across the first quarter of this year. 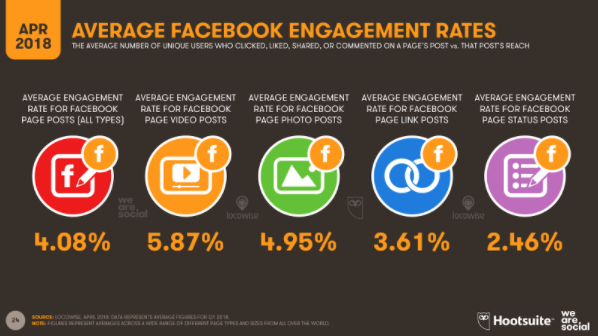 The firm’s data suggest that Facebook reach is falling even faster, with the average page reaching just 8.9 percent of its ‘fan base’ with each post in Q1, compared to an average of 10.7 percent across 2017 – a 17 percent relative drop. 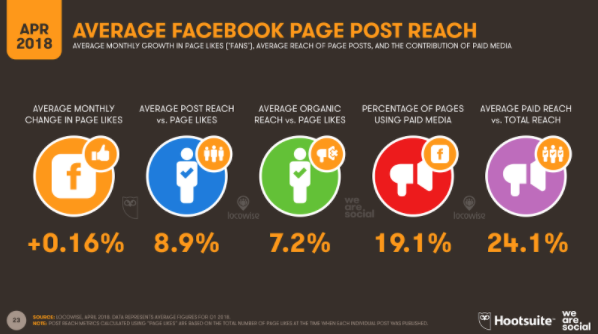 For once, though, Facebook’s algorithm probably isn’t the primary cause of these steep drops.

Locowise’s data shows that 13 percent fewer pages invested in paid media in the first three months of 2018 compared to 2017 as a whole, possibly due to ongoing concerns about the Cambridge Analytica affair.

Organic reach saw a smaller drop of ‘just’ 10 percent in the same period – from 8.0 percent to 7.2 percent – which reinforces the hypothesis that the biggest dent in overall reach in Q1 came as a result of reduced paid media support.

WeChat passes the 1 billion user milestone
Since we published the in-depth Digital in 2018 report back in January, WeChat – or Weixin, as it’s known in mainland China – has passed the 1 billion active users milestone.

WeChat owner Tencent didn’t make a big deal of this announcement though, instead choosing to reveal the major achievement in the body text of its Q4 earnings update.

The latest numbers suggest that roughly 93% of WeChat’s users live within mainland China, which would mean that almost two-thirds of the country’s population now uses the app.

These latest numbers put WeChat in an elite club of just 5 platforms who claim a billion or more active users: 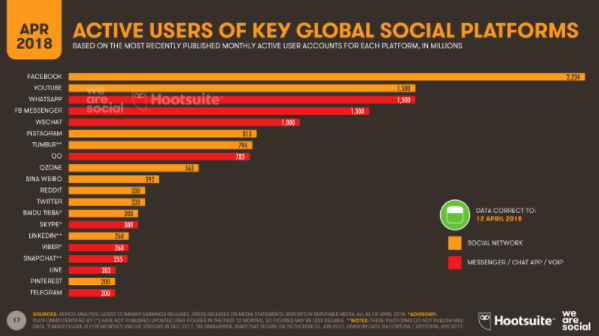 Instagram user numbers surge
Instagram looks set to be the next member of that elite ‘billion club’, although it likely won’t reach that milestone for at least another few months.

The Facebook-owned platform reached 813 million MAUs by the end of March, an increase of more than 35 percent since this time last year. 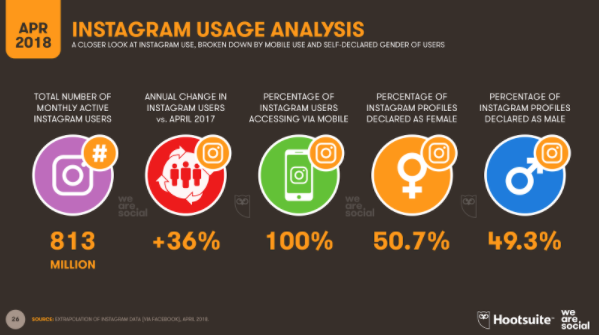 It’s worth noting that Instagram’s user base is predominantly female (albeit only just), in contrast to the male-dominated user bases of both Facebook and Twitter.

Instagram also has a younger user base than these other social platforms, with the median age of Instagram’s users somewhere between 27 and 28. 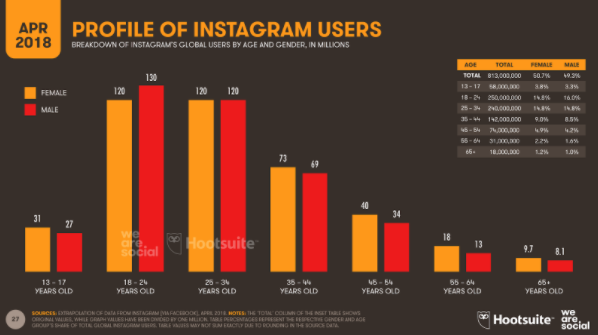 India saw the fastest growth in Instagram users over the past 3 months, with 7 million new users delivering 13 percent growth since the start of 2018.

Germany saw similarly rapid growth, but the United States still managed to add the greatest number of new users, despite already being the platform’s top country. 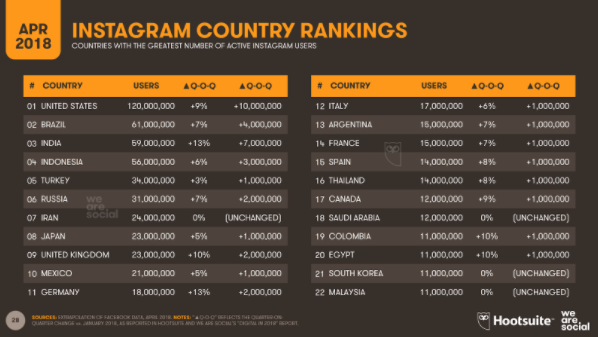 Selena Gomez remains Instagram’s most popular account after the platform’s own stream.

It’s worth noting that two consumer brands – National Geographic and Nike – both appear in the list of 20 most-followed accounts on Instagram too. 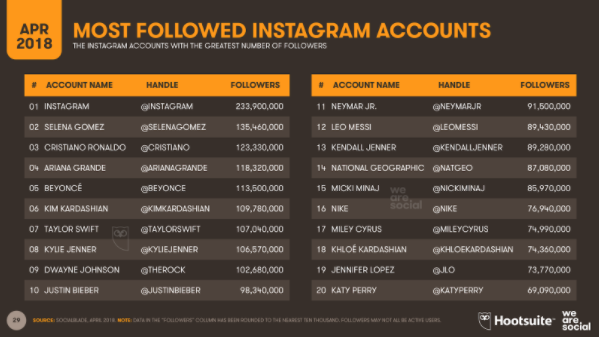 So, what about Twitter?
I promised I’d save some of the juiciest insights for last, so here we go: our first ever in-depth breakdown of Twitter’s global users by gender, age, and country.

The first thing to note is that Twitter’s users are more likely to be male, with women representing less than 43 percent of the platform’s total active user base. 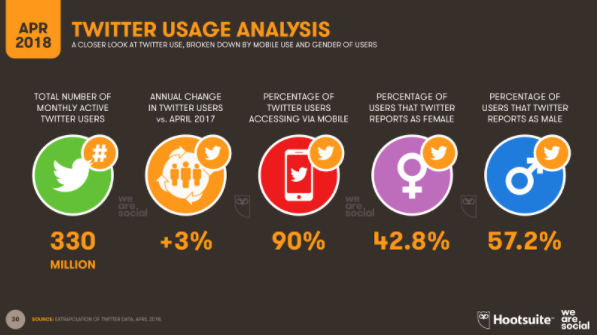 Furthermore, as I noted earlier, Twitter’s users are generally older than those on Facebook and Instagram, with more than half of all Twitter users over the age of 30. 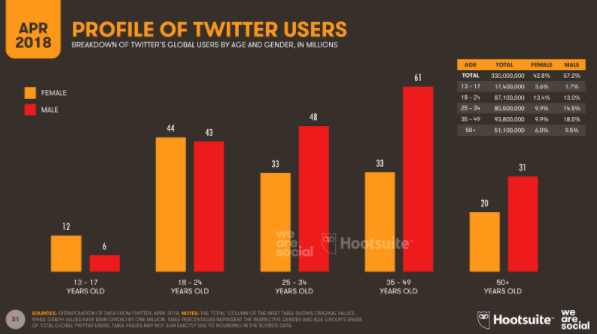 Overall, Twitter’s user growth has flattened in recent months, but it still achieved 5 percent year-on-year growth in the 12 months to the end of March.

The United States accounts for roughly 1 in 5 of Twitter’s users, but Japan is probably the company’s standout country story.

The latest data suggest that that platform now has more than 50 million users in the Land of the Rising Sun, up from 45 million in October 2017.

This means that Twitter penetration sits at an impressive 40 percent in Japan, which puts it second only to LINE, which claims a whopping 73 million active users in the country (57 percent penetration). 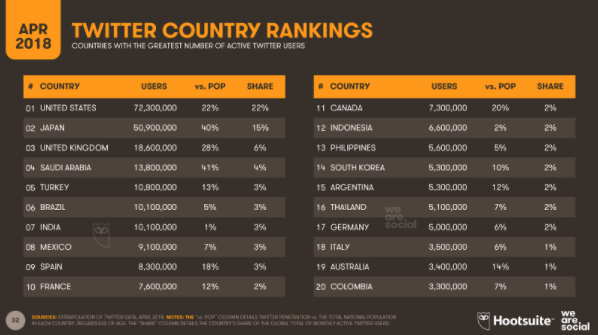 Globally, it’s interesting to note that more iOS users are active on Twitter than Android users, in sharp contrast to Facebook, where 70 percent of global users access the platform via an Android device.

This skew towards Apple devices may be partly because Twitter has historically been integrated into the fabric of iOS, although it’s unclear whether this integration will continue.

StatCounter reports that iOS is the market leader in the USA, Japan, and the UK, so Twitter’s geographic footprint may also play a role in shaping iOS’s share of users. 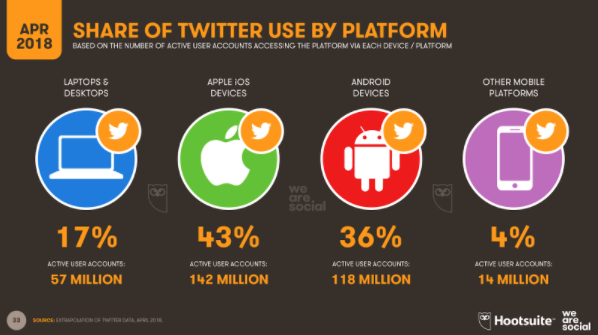 For context, Donald Trump has less than half as many Twitter followers as Barack Obama. 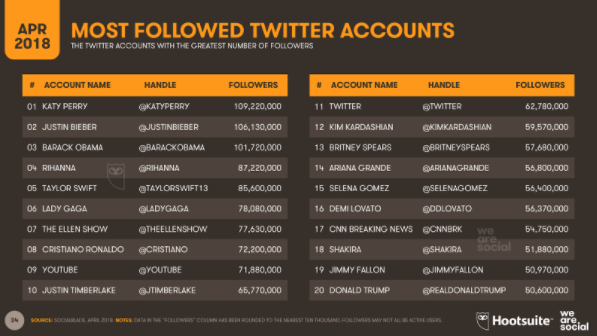 Wait… there’s more?!
There are plenty more gems tucked away in the data in this latest report, but you’ve probably got a life to live, so we’ll save those insights for other posts that I’ll share over the next few days.

In the meantime, here’s the full report again – feel free to contact Simon on LinkedIn or Twitter if you have any questions. 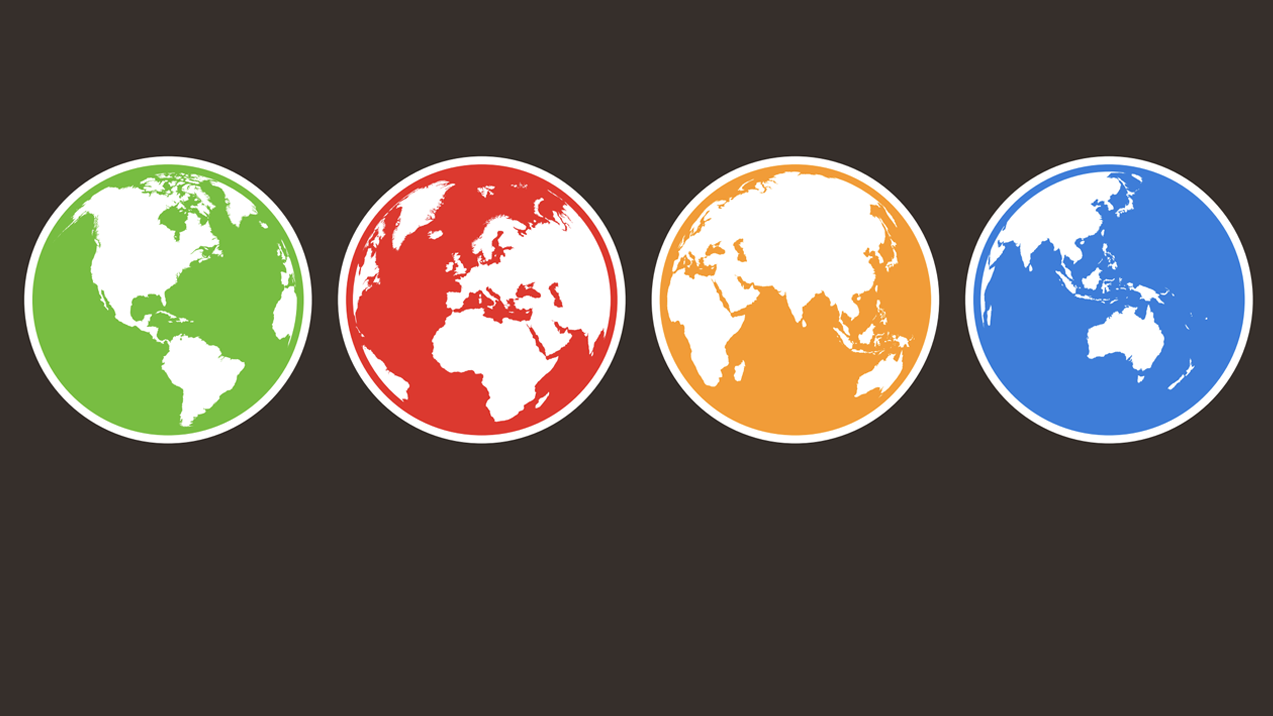